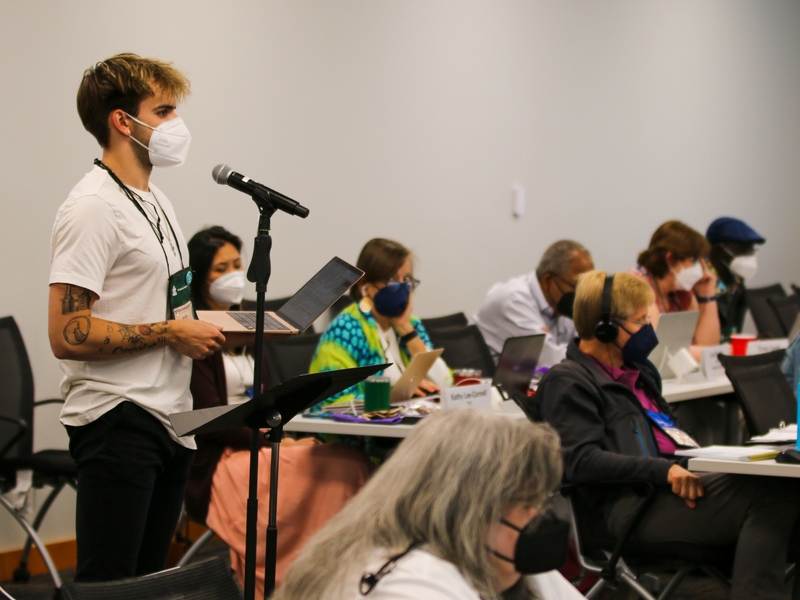 In contrast to yesterday afternoon’s business, the Committee on International Engagement breezed through three overtures, passing all unanimously, during Wednesday morning’s session to complete its work at the 225th General Assembly.

Despite the introduction of a substitute motion for INT-14: On Expanding Mission Engagement and Education in Eastern Europe, this overture did not get held up in parliamentary procedure. The overture, sponsored by the Presbytery of Utah, received multiple amendments, including some items being struck completely. The final version, unanimously approved, directs the Presbyterian Mission Agency to use various actions to “strengthen our accompaniment in the region impacted by the war in Russia and Ukraine and listen deeply and broadly to the many voices.”

The committee moved on to INT-09: Regarding Depleted Uranium in Iraq, from Susquehanna Valley Presbytery. It addresses the crisis of depleted uranium in Iraq, which is not disposable toxic waste.

Overture advocate Matthew Fricker, a pastor from the Pittsburgh area who also served in the military in Iraq for two years, explained that depleted uranium is not a radiation issue. Rather, it is the ingestion of the heavy metal that causes problems.

“[Depleted uranium] is put on top of bombs and missiles, mostly antitank missiles. When it hits its target and bursts, it goes into dust which enters the water tables, air and climate so it’s breathed and consumed through water and food,” said Fricker. “It’s not a radiation issue, but more like Flint, Michigan.”

“I am fervently in support of this action. So often we as a powerful country go into places and cause harm, and in the occasions we rectify that harm, U.S. corporations make a lot of money. I am grateful there is part of this that says to work in conjunction with Iraqi companies and workers to do the work so that funds stay in Iraq,” said Corell.

The final order of business was INT-17: Afghanistan: A Time to Mend—From the Advisory Committee on Social Witness Policy (ACSWAP). This overture has three components, but early discussion centered on unfreezing Afghan government assets held in the Federal Reserve.

Stephen Webb, co-chair of the ACSWP Budget Committee and overture advocate, said, “The U.S. Treasury has started to allow a small trickle of funds to afford basic food, medical and reconstruction supplies, but we need to allow much more, perhaps through a trust fund administered by international organizations like the World Bank.”

Jeromey Howard, ACSWP member and overture advocate, spoke to the committee about another group severely impacted by the Afghan war — veterans. “When we withdrew, many of our veterans had their wounds pulled back over and were left questioning the value of their sacrifices and the actions they made. Some of them made the choice to take their own life,” said Howard.

Item 2 in the overture speaks specifically to recognizing the toll of armed conflict upon military veterans and directs the PC(USA) to partner with veteran organizations to bring to light the effects of post-traumatic stress disorder. Item 3 urges the 225th General Assembly to formally thank those who answered the call to serve in the U.S. armed forces and observe a moment of silence in remembrance of lives lost due to humanity’s inclination toward violence.

The vote to pass this overture without amendment was 30-0 in favor.