Up front about behind-the-scenes work 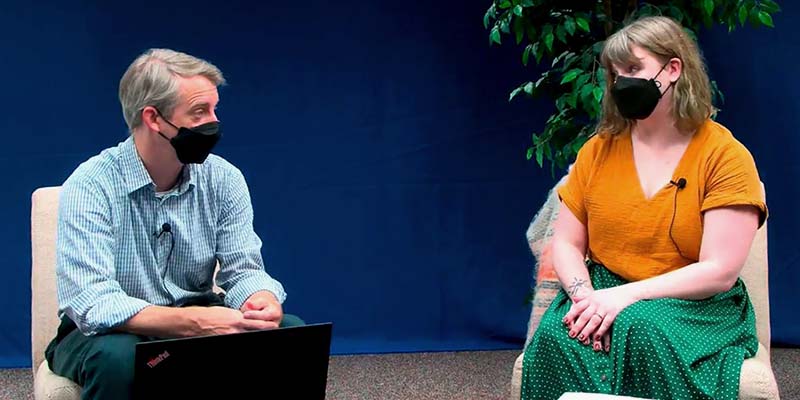 Continuing his look at what’s going on behind the scenes at the 225th General Assembly, Fred Tangeman, host of GA Live, spoke to a repeat guest, Kate Trigger Duffert, on Thursday. To enjoy their 30 minute conversation, which includes Trigger Duffert’s self-guided selfie tour of the conference center while it was still under construction, go here.

Trigger Duffert is manager for General Assembly Business and Per Capita Promotion in the Office of the General Assembly. Tangeman, a reporter in the OGA, asked her what goes on in between each of the four sets of committees that have met over the last 10 days or so in the Presbyterian Center.

Trackers, volunteers who have both experience and expertise, review each committee’s work to ensure that votes don’t conflict with the work of another committee “and everything is in order,” Trigger Duffert said. “They sit down with committee leadership and once the work has been certified, it’s scripted and put together for plenary presentations.” All that work, she said, “allows commissioners to easily follow what’s being put before them” during plenary sessions.

Asked by Tangeman about significant business that will come before commissioners when plenaries begin on Tuesday, Trigger Duffert had a handful in mind. Among them are HSB-06 and HSB-07, items from the Health, Safety and Benefits Committee dealing with family leave. Another, MC-02 from the Mid Councils Committee, encourages the Board of Pensions to consider allowing ruling elders serving in mid council executive staff positions the option of enrolling in the Pastor’s Participation Plan. That same committee approved MC-10, which would establish a task force to explore the theology and practice of ordination to ordered ministry for ruling elders. Finally, by a one-vote margin, the Polity Committee passed POL-08, which would allow congregations to elect members as ruling elders for service to the larger church.

Tangeman and Trigger Duffert discussed what will be the first item of business during Tuesday’s plenary: approving the consent agenda, which is filled with non-controversial items passed by wide margins in committees. What does it say about the church, Tangeman wondered, that so many items of business were passed unanimously or nearly so?

“I think what we are seeing in 2022 is there is clarity of purpose and mission in the church,” Trigger Duffert said, especially in discussions around racial and gender justice, the PC(USA)’s  international relationships, and items related to mission and “the way we do social witness in the church … It feels different. We are a little more unified in our perspective.” Questions such the possible changing roles for ruling elders, “that’s the crux of the conversation,” Trigger Duffert said. “How do we do church and embrace the values we have all agreed on?”

Of the four committees that began their work Thursday, Trigger Duffert said that “a lot of folks are monitoring the Financial Resources Committee,” which on Friday is scheduled to take up FIN-10, “Align in Mission, Purpose and the Use of Resources,” the report of the Special Committee on Per-Capita Based Funding and National Church Financial Sustainability. That report includes a proposal to form a commission to oversee and facilitate the unification of the OGA and the Presbyterian Mission Agency into a single agency.

“That committee is not usually an exciting one” for many Presbyterians, she said. “But it is a proposal on the overall structure of the denomination.”

GA Live can be seen at 10 a.m. Eastern Time each day business is conducted during the 225th General Assembly. View it here.