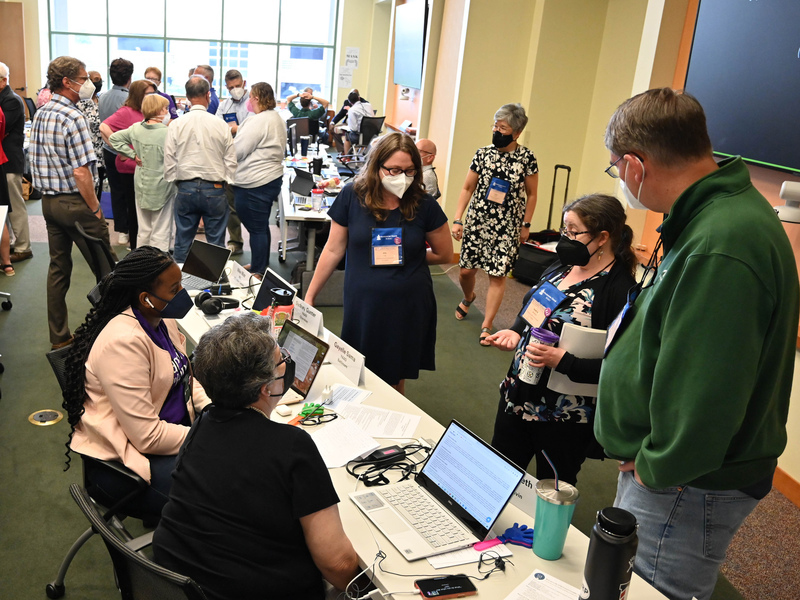 The General Assembly Ministry Coordination Committee voted Thursday in favor of creating a permanent LGBTQIA+ Equity Advocacy Committee following passionate comments on both sides of the issue, and prayer. It also heard a presentation designed to help GA committee members begin to consider what format the 226th GA (2024) should be conducted in.

The Ministry Coordination committee voted 30-5 to approve the LGBTQIA+ advocacy committee after considering the proposal (GA-MC 05) for more than an hour. The idea from an LGBTQIA+ advocacy task force was initially to be considered by the 224th GA (2020) but business ended up being scaled back due to the pandemic.

Today, there’s an even stronger need for the task force, given “the growing rise of anti-trans and anti-LGBT legislation at the state level” and the overturning of Roe v. Wade, M. Shea McGinnis told General Assembly News.

McGinnis is moderator of the Task Force to Investigate the Need for a LGBTQIA+ Advocacy Committee, which came out of the 2018 GA, and he made an appearance at Thursday’s GA committee to support it. But a few people spoke against it.

One of the biggest opponents was Commissioner John McKell of North Alabama Presbytery, who said he had read some alarming materials before GA and considered not coming at all.

“I am a white cisgender heterosexual male,” he said. “I feel this denomination is moving towards a way to tell me I should feel guilty for who I am and the problems I have caused. Well, I don't feel guilty. I have worked for 34 years now, trying to build up this church and to speak God's truth in love and to care for all people in this denomination, so I resent the moves of this denomination to exclude my voice.”

McKell went on to challenge the legitimacy of the TQIA+ portion of the community, adding, “We should be transformed, not conformed to the world.”

Commissioner Heather McIntyre of Charlotte Presbytery was among those who expressed strong support for the LGBTQIA+ proposal.

“I want to commend our denomination for doing some of the things that we have done, for extending marriage equality and for extending ordination equality, at least on paper,” McIntyre said. “But the fact of the matter is, the work is not done. There are micro- and macro-aggressions against LGBTQIA siblings in Christ every day, in different levels of our denomination,” and it’s not always clear who to go to for help.

McIntyre went on to say, “What I think this task force (advocacy committee) would do is not tell people to be ashamed of who they are, or to make people feel guilty, but to give people a place to go when they do have concerns” and provide “someone who can speak to them who understands the concerns and who is willing to be that advocate to say that we truly are invested in being the open and affirming denomination we have proclaimed ourselves to be.”

Kyle Hite of Trinity Presbytery spoke against the measure, citing financial implications and noting there’s sometimes been a lack of responsiveness on the part of the General Assembly when local congregations need help.  “I see that we're allocating our resources now towards advocacy groups as opposed to the survival and the growth and evangelism and stewardship and the proclamation within local congregations.”

Ultimately, the measure passed after Vice-Moderator Warren McNeill took a moment to say a prayer, asking for God’s wisdom and guidance and that all would feel welcome and affirmed.

In other business, the committee approved an item, GA-MC-07, that calls for the addition of inclusive gender options when gender information is collected by any entity of the PC(USA), and GA-MC-11, which calls for changing the term “AIDS” to “all people living with HIV” in the Presbyterian Planning Calendar and new publications.

The Rev. Eliana Maxim, COGA’s vice moderator, told the group, “you may come up with your own format,” but “we would invite you to somehow set aside an emotional response. Perhaps, you might be wanting to seek or re-seek to recapture what was before the pandemic. Rather, we ask you to look with an eye towards who we are today and what direction the church needs to go in the future.”

Ministry Coordination Committee Moderator Anne Wilson asked its members to break into small groups to think about what they themselves value about General Assembly and report back. Those who opted to speak included Young Adult Advisory Delegate Daniel Presa, who said community is something he’s valued about GA.

The committee, which will continue discussions Friday, also got to ask COGA questions, including why it would cost $1.2 million to have the assembly all online.

“At least half of that cost would be cancellation fees related to facilities in Salt Lake City,” said Kerry Rice, Deputy Stated Clerk in the Office of the General Assembly. “The other parts of that are for the tech that you see before you and the management and the production team for all of that technology. Online meetings are not free.”

To see what other business the committee addressed on Thursday, go here.