PAP Committee unanimously recommends re-election of the Rev. Dr. Diane Moffett as head of the PMA 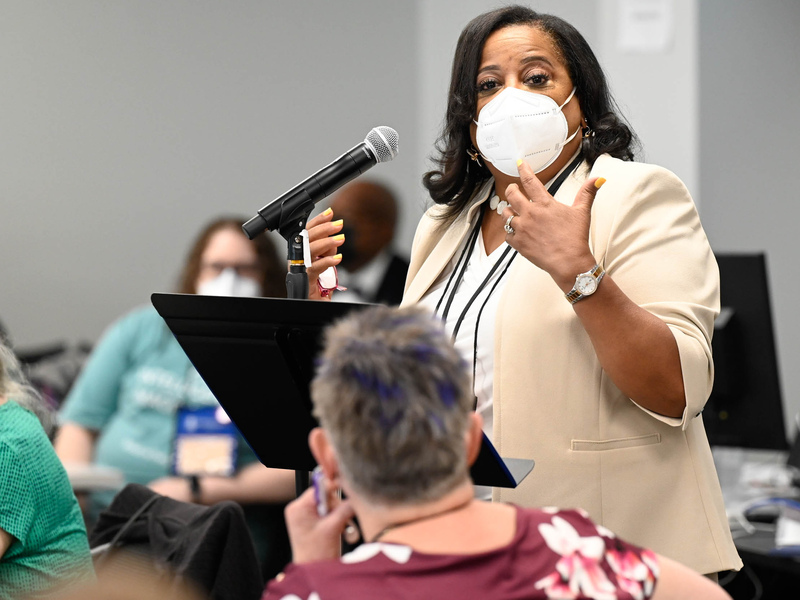 After sounding a clear note of grace, gratitude and hopefulness through its opening worship, the 225th General Assembly’s GA Entity Policies and Procedures Committee voted unanimously first to confirm the reelection of five associate stated clerks of the General Assembly, and then to recommend the confirmation of the Rev. Dr. Diane Moffett to a second four-year term as president and executive director of the Presbyterian Mission Agency (PMA).

In presenting the recommendation, PAP-13, of the Presbyterian Mission Agency Board (PMAB) to re-elect Moffett, the Rev. Warren J. Lesane Jr., chair of the PMA Board and executive and stated clerk for the Synod of the Mid-Atlantic, was effusive in his praise of Moffett, who was elected to her current position in 2018.

“This is holy work that is being done on behalf of the church,” said Lesane, characterizing Moffett as “a bold and visionary leader, an agent of change, a consummate collaborator, a preacher of preachers and a teacher of teachers,” among other superlatives.

“She has increased communication, transparency and trust,” he added. “She has shifted the board culture in ways that are positive and permanent.”

Moffett prefaced her remarks by saying that this work “has been a profoundly spiritual calling for me.”

As she shared the PC(USA)’s continued growth toward becoming a Matthew 25 church — namely the adoption of the invitation by almost half of the denomination’s presbyteries, nearly 80% of its synods, and close to 1,000 of the PC(USA)’s congregations as well as 54 entities and groups — Moffett affirmed that Matthew 25 has become more, rather than less, important.

“We are waking up to new possibilities based on [Matthew 25’s] trifold emphasis of building congregational vitality, dismantling structural racism and eradicating systemic poverty,” she said. “The holy endeavor comes alive as Presbyterians commit to building up the church and raising up disciples of Jesus Christ in understanding what Christ is demanding of us now.”

Moffett concluded by saying that in the face of so much brokenness, Presbyterians have an opportunity to be “agents of healing.”

“Remembering the songs of my African ancestors, ‘There is a balm in Gilead,’ I am compelled to share the balm with others,” she said. “If you decide that it is God’s will to re-elect me for another four-year term, let’s go together! Amen!”

Anderson explained via Zoom that RE&WIM provides “programmatic, logistical and sometimes financial support, amplifying the work of PW while supporting its autonomy.”

She clarified that the 2022 agreement being presented for the committee’s — and later the Assembly’s — consideration remains substantially the same. “This is not so much an adoption, but a renewal,” she said. “There is much history behind this codified agreement.”

The motion to recommend was approved, without amendment, by a vote of 30–0. 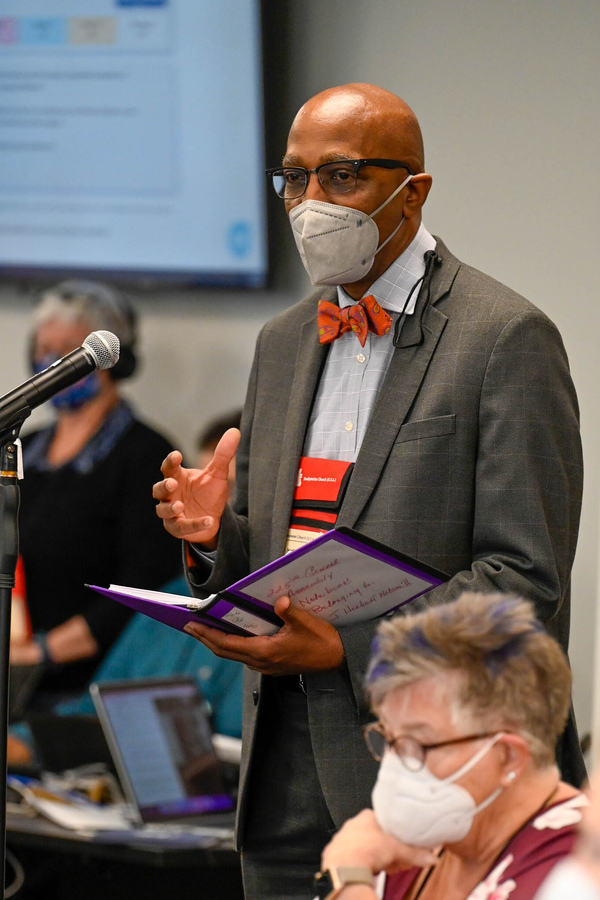 The committee then took up a recommendation from the Committee on the Office of the General Assembly (COGA) to make several amendments to the Session Annual Statistical Report (SASR).

PAP-03 was presented to the committee by the Rev. Lynn Hargrove, a member of COGA, and Kris Valerius, manager of Denominational Roles and Statistics in the Office of the General Assembly.

Hargrove explained that, if approved, the proposed changes — including the broadening of age categories and the elimination of what she and Valerius described as “confusing” definitions in the section on a church’s racial ethnic composition — would make it easier for stated clerks in congregations to complete the annual task.

“We recognize that many of our congregations don’t have children at this time,” said Hargrove. “The form is easier to fill out if we use broader [age] categories. We also track race and ethnicity, and because we’ve often gotten pushback on the descriptions [in the form], the recommendation is not to remove the categories, but only the definitions.”

The categories, which would remain unchanged under the SASR’s “Racial Ethnic Composition of the Church” section, should the Assembly approve the action, are Black/African American/African; Asian/Pacific Islander/South Asian; Hispanic/Latinx; Native American/Alaska Native/Indigenous; Middle Eastern/North African; White; and Multiracial.

Following a series of questions, including one from Teaching Elder Commissioner John Owen, Presbytery of the Inland Northwest, asking whether “we [would be] sacrificing accuracy and precision by leaving it up to individual clerks to decide who belongs to which definition,” the motion was approved by a vote of 30–0.

After additional discussion, the motion to include those questions was approved.

PAP-22 recommends amendments to the Memorandum of Understanding between the PC(USA) and the Board of Pensions that would make it more accountable to the General Assembly.

“The Board of Pensions was created independently to ensure no conflict of interest, provide benefits for members and shield the PC(USA) from liability,” said the Rev. Dr. Frank Clark Spencer, president of the Board of Pensions. “The board manages the assets solely for its members’ money, not the church’s money. This structure is intentionally and clearly documented.”

The Rev. Stephanie Anthony, COGA moderator, says it’s less about specifics around the Memorandum of Understanding and more about how the General Assembly goes about business.

“What we imagine is more of a roundtable of staff and elected individuals from the impacted agencies to develop a way to make this relationship clear,” she said. “It seems that by the nature of this discussion, it’s not clear to the church what these relationships are and COGA thinks the church would be served by a clear understanding, clarity and information.”

After additional discussion, a motion was made and passed to oppose the recommendation.

The Rev. Dr. J. Herbert Nelson, II, Stated Clerk of the General Assembly of the PC(USA), also offered greetings to the committee on its first day, urging members to fulfill the church’s calling.

“Church is about capturing the essence of what God is trying to do with us and through us. It’s about taking the message forward. We may fail, but we must dust ourselves off and try again,” he said. “The church is in repair right now and I believe that is where growth happens. We have experienced the power of the one who woke us up this morning and that will be the one to lead us.”

The committee continues its second day of meetings on Friday.