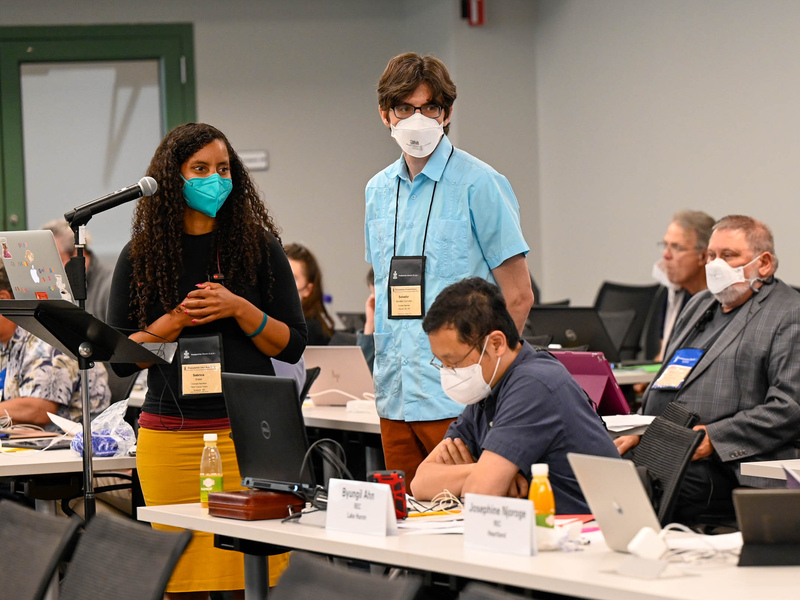 Co-moderators of the Vision 2020 Committee the Rev. Sabrina Slater and Salvador Gavalda answer questions from members of the Moving Forward/Vision 2020 Committee on June 30, 2022, during the 225th General Assembly of the Presbyterian Church (U.S.A.) in Louisville, Kentucky. (Photo by Rich Copley)

Co-moderators of the Vision 2020 Committee the Rev. Sabrina Slater and Salvador Gavalda answer questions from members of the Moving Forward/Vision 2020 Committee on June 30, 2022, during the 225th General Assembly of the Presbyterian Church (U.S.A.) in Louisville, Kentucky. (Photo by Rich Copley)

The Moving Forward/Vision 2020 Committee got through most of its scheduled workload Thursday, approving with a handful of amendments most sections of MOV-01, the Guiding Statement from the 2020 Vision Team.

The Rev. Sabrina Slater and Salvador Gavalda, the co-moderators of the 2020 Vision Team, which was formed in 2016, presented the Guiding Statement to the committee for its discernment. The statement relies on the denomination’s acronym, PC(USA), to state that God is calling the denomination to be Prayerful, Courageous, United, Serving and Alive.

Click here to hear a song written and recorded as part of the work of the Vision 2020 Team. The sheet music for “This is Who We Are” is here.

The pandemic pushed consideration of the Guiding Statement back two years. “Everyone is still passionate about what’s being offered,” Slater told the committee. “We offer it humbly and with the weightiness that was six years in the making.”

Gavalda and Slater led the committee through a short worship service to show how the statement might be used by churches and mid councils across the denomination. When the service concluded, Slater told the committee, “What we just experienced is what we experienced as a team. It’s life-giving and it sparks something in the work we are already doing or in the work God is inviting us to step into. You got to experience a little bit of what the Holy Spirit had to give us.”

Dr. Corey Schlosser-Hall, the Presbyterian Mission Agency’s deputy director for Vision, Innovation and Rebuilding, said he’s been asked about the relationship between the guiding statement and the PC(USA)’s Matthew 25 invitation. “One of the best descriptions came from Sabrina,” Schlosser-Hall said. If Matthew 25 is a missional vision calling the church into action, “this statement is the way to be who we are as we pursue that action,” he said. “We find them to be complementary and synergistic.”

How did we get here?

Before committee members considered the Guiding Statement, the Rev. Dr. Charles Wiley, Director of Major Gifts at Columbia Theological Seminary who formerly worked in the PC(USA)’s  Office of Theology & Worship, talked to them about how we got to where we are. Wiley took committee members back to 19th-century history of the forebears to the PC(USA).

Despite the fact the national staff is now about half the size it was in 1987, “we’re still kind of a big ship trying to turn,” Wiley said. “We still have a fairly large national structure, even though it’s way smaller than it used to be.”

As for why vision statements are still needed, Wiley said there are two reasons: people are looking for inspiration, such as Vision 2020 provides, and because “there are lots of hard decisions that need to be made. We’re looking for a strong and clear vision statement to make the decision-making process better.”

A word from the Stated Clerk

“It’s a time we’re challenged to be innovative, and we at this headquarters have tried to model some of that,” Nelson said. “Being a church of the 21st century is a challenge for a lot of us. The world has changed, and it continues to change each and every day.”

“We’d love to be somewhere in the U.S. having a big tent General Assembly, but we’ve had to figure out how to do this thing [in hybrid fashion and by wearing masks and practicing social distancing] as we continue to move forward.”

Fortunately, “we know who holds the end and who ultimately is the author and finisher of all we do,” Nelson said. “I believe the good Lord is dismantling the old ways we have done things — not throwing it all out but being very selective. If you’re going to get it done, you’ve got to get off your blessed assurance and make it happen.”

“In the end, we’ve got one great fellowship to sustain the work of the Presbyterian Church (U.S.A.),” the denomination’s top ecclesial officer told the committee, “and it’s happening because you have joined us in this great celebration of what it means to be the church of the 21st century.”

After the committee completes its work Friday on the Guiding Statement, it will hear from the Moving Forward Implementation Special Committee and begin considering MOV-02, the report of that special committee.