Day one with the Financial Resources Committee 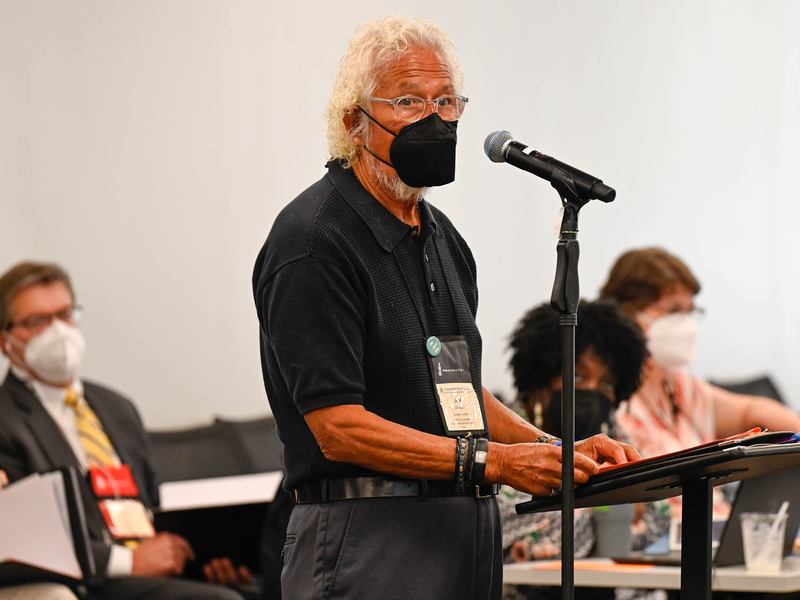 The Rev. José Olagues, co-moderator of the Jarvie Commonweal Endowment Reconciliation Team, delivers a report to the Financial Resources Committee on June 30, 2022 at the 225th General Assembly of the Presbyterian Church (U.S.A.) in Louisville, Kentucky. (Photo by Rich Copley)

The Rev. José Olagues, co-moderator of the Jarvie Commonweal Endowment Reconciliation Team, delivers a report to the Financial Resources Committee on June 30, 2022 at the 225th General Assembly of the Presbyterian Church (U.S.A.) in Louisville, Kentucky. (Photo by Rich Copley)

The committee also reviewed business about the Jarvie Commonweal Endowment, Special Offerings and the Evangelical Seminary of Puerto Rico in San Juan.

The committee’s voting work began with unanimous approval of [FIN-08]: “Re-election of Thomas Taylor as President and CEO of the Presbyterian Foundation,” with 22 votes. During the Rev. Dr. Taylor’s “12 years of service, the Foundation reversed downward trends, which has steadily increased the number and dollar amount of new gifts, beginning with $18 million in his first year in 2010, and achieving a record of $146 million in 2021,” according to the recommendation.

Later in the morning, the committee voted on another Foundation-al item, [FIN-09]: “Confirmation of New Covenant Trust Company Election of Directors,” after a presentation by Greg Rousos. New Covenant Trust is a part of the Foundation and offers financial services for churches and individuals, including donor-advised funds. The unanimous vote by 22 committee members approved all the directors proposed for New Covenant’s board.

Between those two items, the committee had looked at [FIN-05]: “Jarvie Commonweal Endowment Reconciliation Team Recommendation and Report.”

Report presenter the Rev. José Olagues, team co-moderator, gave background on the fund, which was established in the 1920s to provide financial and other support services to Protestants living close to New York City. Olagues also discussed the disagreement at the heart of the team’s work, about the decision by the Presbyterian Mission Agency (PMA) to discontinue staffing and managing the Jarvie program, and concerns from local stakeholders about how that decision was made, including voices that were not heard from.

The team’s report recommended that the “process of reconciliation” that has been ongoing between the PMA, the Presbyterian Foundation and The Friends of Jarvie in the two years continue. Specifics about appropriate roles for participants in those conversations were included in the report’s rationale. The committee voted unanimously to approve FIN-05, with 23 votes in favor.

Before lunch, the committee reviewed [FIN-15]: “Confirmation of Individuals Appointed to the Presbyterian Church (U.S.A.) Investment and Loan Program, Inc., Board of Directors,” with Jim Rissler and Clare Lewis from ILP speaking earlier about the program’s history and how it supports a range of Presbyterian institutions, not just congregations, making building construction and debt-refinancing possible. They showed photos of buildings ILP has helped finance in recent years, including a senior care facility, a student center at a Presbyterian college and an old church building newly renovated to host community services — “all Presbyterian projects,” Rissler said. 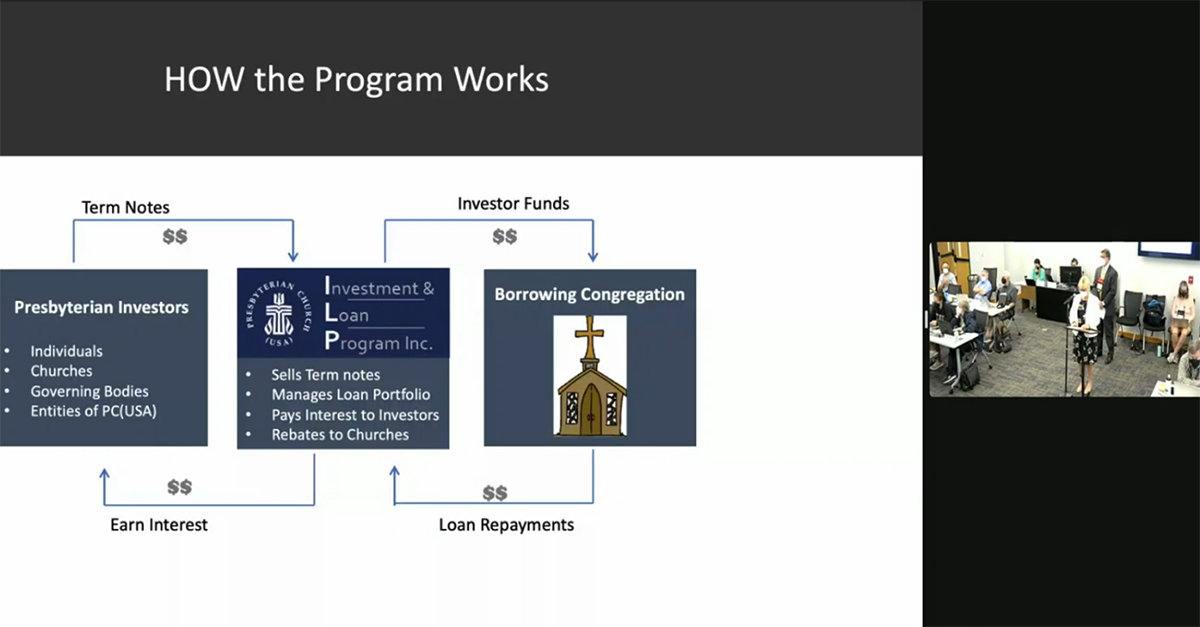 Tim McCallister and the Rev. Dr. Barry Ensign-George from the PMA introduced the overture.

Tamara Williams, a task force member and member of the PMA Board, spoke about the task force, which had continued its work after its original deadline in 2020 in part because of the pandemic’s pronounced impact on church membership and fundraising. She said that the mission of the Special Offerings needs to be in sync with the evolving overall approach of the PMA, in particular the Matthew 25 invitation.

Dr. William McConnell, interim director of Special Offerings, spoke about congregations collaborating to use Special Offerings funds “in ways that are important to them” and to the ways the gifts are administered. He discussed the dramatic increase in special offerings participation by congregations from 2020 to 2021.

The task force’s recommendation included language suspending “the goal of $20 million by 2025 and establish[ing] a new goal of increasing the percentage of Four for Four congregations by 10% by 2025,” and affirming “the current interpretation and distribution of Special Offerings.”

After a quick amendment updating the original report for 2020 to 2022, the committee approved FIN-01 unanimously with 22 votes.

The committee turned back to FIN-03, but still wanted more information from resource staff. Among those joining the conversation were Barry Creech of the PMA, the Rev. Michelle Hwang of the Racial Equity Advocacy Committee and the Rev. Dr. Lee Hinson-Hasty with the Presbyterian Foundation, who spoke about the support opportunities available to the Evangelical Seminary through the Theological Education Fund, which is connected to the Committee on Theological Education (COTE).

After a Theological Student Advisory Delegate from the Evangelical Seminary addressed the committee in Spanish, with interpretation in English (“Our seminary is going through a very difficult period financially,” the speaker said, adding that FIN-03 could help the seminary’s students in important ways), commissioners voiced support for providing more support to the school. But there were also concerns that explicitly linking that support to the Christmas Joy Offering could diminish resources currently being provided to three institutions through the offering.

An amendment to strike out language about the Christmas Joy Offering failed. But the amended overture was also voted down, on a tie vote of 11 against and 11 for.

The disapproved amendment, with a comment urging more support to the seminary through COTE, was sent to the full Assembly on a vote of 20 for and 1 against.

After the last break of the day, the committee turned to another Foundation-related item, [FIN-07]: Recommendations from the Presbyterian Church (U.S.A.) Foundation to the 225th General Assembly (2022).

Its five recommendations include four urging the Foundation “to continue” existing work and one to “explore and initiate ways to enhance its expertise and capacity in support of planned and deferred giving (including legacy gifts through wills, trusts and estates)” and the services of New Covenant Trust “to be ever more effective contributors toward the fulfillment of the Great Commission for the glory of God.”

Newly reelected president of the Presbyterian Foundation Taylor addressed the committee along with the Rev. Dr. Neal Presa, outgoing Board of Trustees chair of the Foundation and Moderator of the 220th General Assembly (2012). Presa touched on the successes of the past two years that Taylor had related during his morning presentation, and the work of investing in entities working to increase diversity, equity and inclusion. Taylor explained a competitive advantage the Foundation has over other financial firms — it has the same investing understanding but also “knows the church.” Its Project Regeneration is building ministries around the country, Taylor said, including Grace Presbyterian Church in Tuscaloosa, Alabama, which was highlighted in a video. 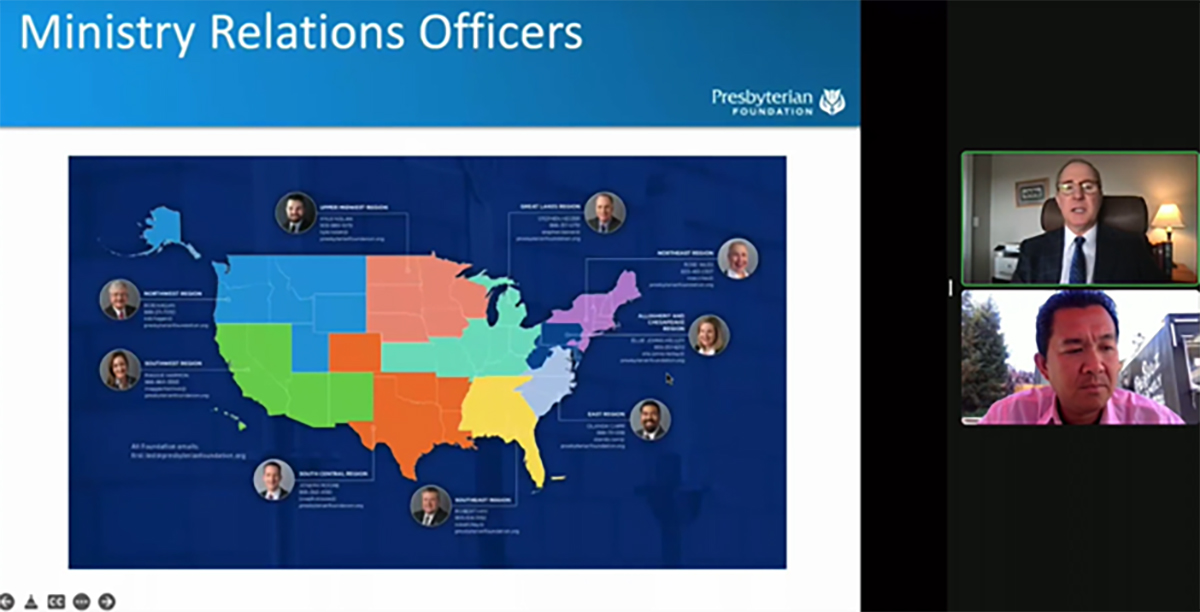 The Foundation’s Anita Clemons talked about its compliance with Mission Responsibility Through Investment, the PMA group that manages a list of divested-from corporations, and the Foundation’s close work with Northern Trust. Russo followed up with information on managing gifts and investments and securing data. Taylor returned to talk about Foundation support for stewardship education for church leaders, in part through a recent Lilly Endowment grant, and its investment in overseas projects, including in Israel-Palestine.

A commissioner asked about investments made to the Foundation that have become impractical to administer or don’t match the church’s values. The Foundation’s general counsel said it works using cy pres (“as near as possible”) to amend fund instructions to achieve a charitable purpose in keeping with the original gift but also 2022 laws and values. Taylor thanked the Advisory Committee on Social Witness Policy for its support of the report’s five recommendations alongside related language in RGJ-10: “Resolution on Race, Reparative Justice and the PCUSA.”

When time came for the votes, FIN-07 was unanimously approved with 22 votes.

In closing notes, the committee vice-moderator encouraged members to review GAMC-15, about the format of the next General Assembly, so it is in “the back of our minds” as the committee moves through its schedule of business on Friday and Saturday.