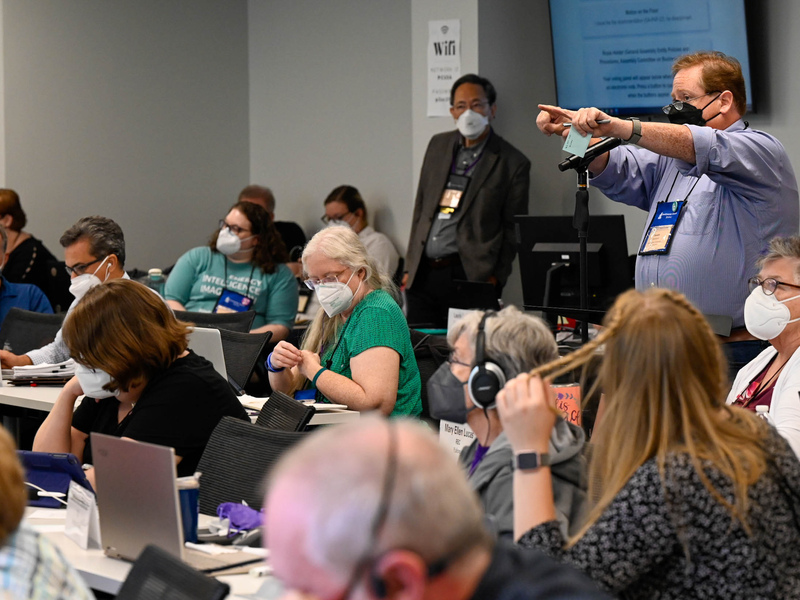 The General Assembly Entity Policy and Procedures Committee began the morning in prayer and reflection before going into 30 minutes of small group discussion around overtures PAP-01, PAP-02 and PAP-19.

The three overtures, while separate from a voting perspective, contained redundancies and inconsistencies among them, which made for much debate on how to best present them to the full Assembly. Much of the confusion centered on the agency review process for the Administrative Services Group and Presbyterian Church, A Corporation. PAP-02 would effectively add those two agency reviews separately, while PAP-19 proposes they would be included as part of the all-agency review. It was decided the best course of action was to deal with PAP-02 and PAP-19 first.

PAP-02 was disapproved due to redundancy with language in PAP-19, which in turn was approved unanimously. With those two items seemingly dealt with, attention turned to PAP-01, a referral from the 224th General Assembly (2020) which recommends several amendments to the Organization for Mission (OFM). There were lengthy deliberations between commissioners about conflicting language between PAP-01 and PAP-19, so it was decided to strike the offending language from PAP-01 and insert the content of overture PAP-19 in its entirety into PAP-01, thus approving PAP-01 with amendment.

That action, however, raised questions as to whether having two overtures with common but not identical language would risk one being voted down by the Assembly, so it was decided by parliamentary procedure to reconsider PAP-19 and it was amended to “answered with action by another resolution” —  PAP-01.

In short, PAP-01 will go the Assembly for vote; the other two overtures will not.

In contrast to the prolonged discussions around the first three overtures, PAP-04 and PAP-05 were approved swiftly without amendment.

PAP-04 recommends an amendment to the OFM that people nominated for election to General Assembly be eligible to serve a four-year term and be eligible for election to one additional term but “ordinarily” no person may serve more than two consecutive terms. The term of service begins at the adjournment of the last meeting of the Assembly that elects them, unless otherwise specified.

After the lunch break, the committee sped through the afternoon session, first considering PAP-16, which updates the OFM by allowing committee meetings and task forces of the General Assembly to be conducted through electronic communications media, as long as the technology enables all participants to have simultaneous aural communication. The overture passed unanimously without amendment.

The next item, PAP-21, passed unanimously and confirmed the Presbyterian Historical Society board members for the 2026 term. First-term nominees are:

“COTE places a strong emphasis on its role as a communications link and a catalyst for addressing the needs of our seminaries and the denomination and church,” said Tracy. “We have responded to an accelerated pace of dramatic change in theological education. Changes are happening not just in the PC(USA) but across all faith traditions. Consequently, we believe there is a need to be more agile than ever for us to fulfill our mission.”