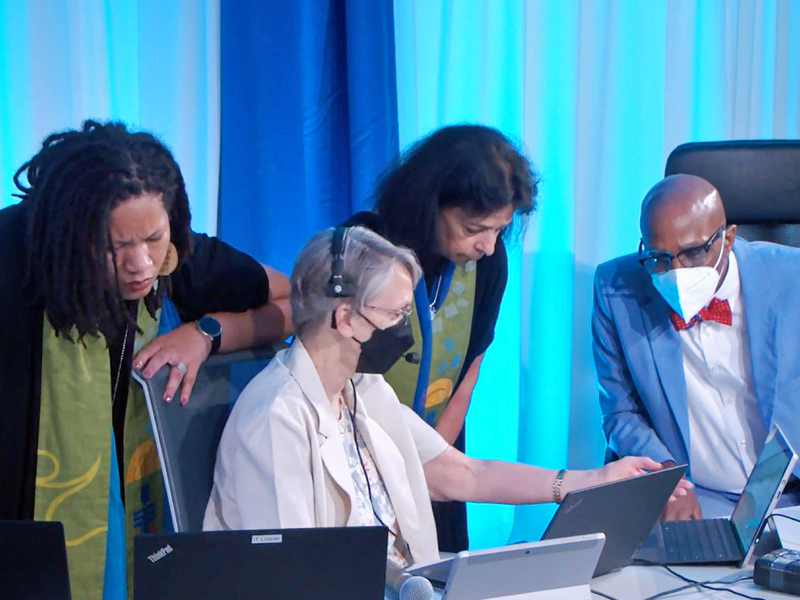 The commissioners considered seven overtures from the Committee on Mid Councils. MC-11, MC-05, MC-02, MC-03, and MC-08 all passed with little fanfare. MC-11 resolved that on an annual basis each presbytery compile a list of non-ordained persons who have died and who gave years of faithful service to the church, in order for them to be memorialized during the subsequent General Assembly. The commissioners approved the recommendation to refer the resolution to the Committee on the Office of the General Assembly, with a request that they work in coordination with the writer of the resolution.

MC-05 allows appointment of a ruling elder moderator or session moderator from a remote location in extraordinary circumstances. Although already in practice, it is not explicitly stated in the Book of Order. The resolution passed as amended.

MC-02 encourages the Board of Pensions to prayerfully consider allowing ruling elders serving in mid council staff positions the option of enrolling in the Pastor’s Participation Plan. It was approved as amended and included the comment that “in light of testimony from the Board of Pensions, who spoke in favor of the spirit of the amendment, which while being specific in regards to ruling elders in mid councils, believes further parity should be pursued and established.”

Establishing the authority of presbyteries to define severance plans for installed ministers is the focus of MC-03. The motion was approved with amendment.

Ellen Johnson-Price, of Yukon Presbytery, spoke in favor of adopting MC-08, which clarifies that presbyteries may authorize a ruling elder be commissioned to serve one or more validated ministries of the presbytery. According to Johnson-Price, this overture would be an immense help to smaller congregations in rural villages.

The intent of MC-06, which was approved as amended by the committee, is to allow synods more flexibility in fulfilling their participation and representation by providing for additional voting members beyond those elected by their presbyteries, including representation of the synod’s racial ethnic active leadership.

By far the liveliest discussion revolved around MC-10, which creates a task force to explore the theology and practice of ordination for ruling elders and recommend any changes to the 226th General Assembly (2024). The task force will include representatives who identify as BIPOC, immigrant congregations and New Worshiping Communities. Several amendments and motions were considered, but it was approved as amended by the committee.

After a short break, the assembly moved onto business from the Committee on Polity. Committee moderator Sarah Thornburg, Western North Carolina, submitted three items that were quickly presented and acted upon per the committee’s recommendations. POL-06 and POL-14 were both recommended for disapproval and were voted on accordingly. The intent of POL-16 is to widen the already expansive use of inclusive language as a way to celebrate and acknowledge all people. The resolution passed as amended.

Consideration for POL-10, a resolution to amend G3.0106 to add that all councils adopt and implement an antiracism policy, received most of the commissioners’ attention during this plenary session.

Commissioners representing small congregations expressed concern about having the capacity to write and enact some of the stated policies and suggested that the resolution clarify that the policy would not be required until templates were available for all churches to use.

Judy Wood, who serves on the Advisory Committee for the Constitution, felt putting “that level of granular detail into the Book of Order runs contrary to our form of government.” Others also noted the Book of Order is not meant to be a manual of operations.

Several amendments parsing language were offered and voted down by commissioners. The eventual language agreed on was, “All councils shall adopt and implement the following policies: a sexual harassment and misconduct policy, a non-sexual harassment policy, a child and youth protection policy, and an antiracism policy.”

POL-10 also included a comment that suggested “the Presbyterian Mission Agency create and/or provide template policies for use and adoption by councils of the church.”

POL-17 was passed as answered with action by POL-10, and POL-15, a resolution for receiving immigrant pastors as members of the presbytery, was approved unanimously before the assembly broke for its dinner break, halfway through its Polity Committee business.

The afternoon plenary session kicked off with a video from the Board of Pensions highlighting its work, including the stress of student loan debt for ministers.