Home News Moderators’ Conference to be hybrid event this year

office of the General Assembly

Moderators’ Conference to be hybrid event this year

Office of the General Assembly hopes to change things up 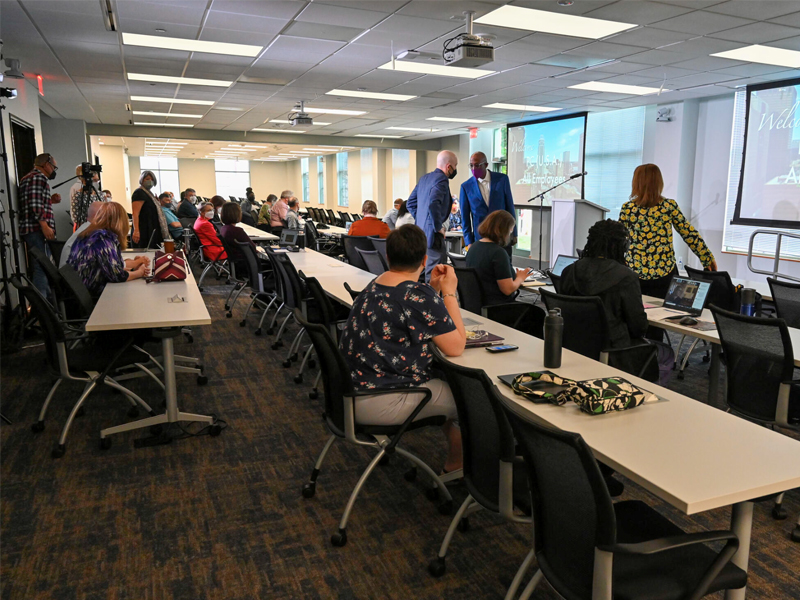 Those attending the 2022 Moderators’ Conference in person will meet in the new conference space at the Presbyterian Center in Louisville, Kentucky. Photo by Rich Copley.

For the first time in three years, synod and presbytery moderators in the Presbyterian Church (U.S.A.) will be able to gather in person this November for the annual Moderators’ Conference. For the past two years, the Covid pandemic has forced the Office of the General Assembly to move to an online gathering. But this year, attendees will have a choice to be virtual or in person.

The conference (often referred to as Mod Con) will be held Nov. 10–12 at the Presbyterian Center’s new conference facility in Louisville. Fresh off the success of the 225th General Assembly, OGA staff are taking what they’ve learned from the Assembly and creating a meeting that will provide opportunities for moderators to connect in a format that works best for them.

“In previous conferences, we’ve been in a hotel ballroom. There were a PowerPoint presentation, a schedule and people with a microphone. That was as high-tech as it got. This year, we will have technical assistance,” said the Rev. Tricia Dykers Koenig, associate director for Mid Council Ministries. “Some people will be on Zoom, so if we break into small groups, they can be in Zoom rooms and should be able to ask questions and participate. We’ll try to make the online experiences as robust as possible. This is a good opportunity to try out hybrid and see how it works with an event that we enjoy.”

Dykers Koenig says the online format the past two years prompted planners to look at the best way of delivering content at the conference, including some pre-conference reading through Equip, the PC(USA)’s online training and resource network. That will allow presenters to be a bit more creative in their interactions with attendees.

“Mid council moderators have a lot of different roles and one of the main things is running the meeting. So, they are very interested in parliamentary procedures training like I did for General Assembly,” said Dykers Koenig. “There’s a version that I’ve done for the Moderators’ Conference that we ask people to watch in advance. Then we try to be a little more playful with it during the actual event.”

Dykers Koenig says participants will be able, through Equip, to study the material at their own pace prior to the conference.

“They will have more opportunities to interact with each other, do some case studies or work on some assignments at the conference. We’ve done things like multiple choice parliamentary procedure trivia, which gives me a chance to interact with the moderators,” she said. “People have responded well to that type of interaction online. I think we can do the same thing in a hybrid situation, so we will be using Equip to give people some information that we hope they will look at in advance.”

The Co-Moderators of the 225th General Assembly, the Rev. Shavon Starling-Louis and the Rev. Ruth Santana-Grace, are taking on leadership roles for this year’s conference. They’ve chosen “Unbounded We Thrive” as the conference theme, which is also the theme for their tenure as co-moderators. The two will lead the opening and closing worship services.

Dykers Koenig says there will be plenaries and workshops, although the online attendees may not have the variety of selections as those in person.

“One of the things I enjoyed when we did this in person was the mission fair idea. When we had the event at the Brown Hotel in downtown Louisville, we put people on buses and brought them to the Center. We would have opening worship in the chapel and then let them loose in the building to meet staff and learn what they do,” she said. “We’ll probably do that again and give folks a chance to interact with staff. People who come will also have the opportunity to interact with Shavon and Ruth, and that is usually quite a highlight for folks. Attendees will likely hear from the Rev. Dr. J. Herbert Nelson, the Rev. Dr. Diane Moffett and other leaders at various times.”

Dykers Koenig says this will be the first visit for most of the moderators attending the conference.

“They are all fresh, interested and drinking in the information. They’re excited to be here and it’s always fun to have them,” she said. “Several committee meetings are scheduled this fall at the Center, but this will be the first non-General Assembly conference training in the new space that will be highly produced.”

More than 120 moderators are expected to participate this November. Registration is expected to open after Labor Day. Information on hotels will be forthcoming.