Managing GA business takes time and a lot of effort 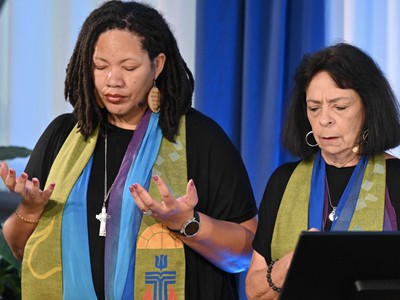 Co-Moderators of the Assembly the Rev. Shavon Starling-Louis and the Rev. Ruth Santana-Grace offered a prayer. - Photo by Rich Copley

It’s been nearly a month since the final gathering of the 225th General Assembly of the Presbyterian Church (U.S.A.), but the process of moving ahead with Assembly actions is just beginning. The Office of the General Assembly has begun the tedious task of poring through the decisions and developing a timeline for action.

Among the decisions reached were plans for the 226th General Assembly to be held in 2024. The Assembly approved a different version of the hybrid gathering, where committee meetings will be held online with commissioners and advisory delegates traveling to Salt Lake City for plenary.

“OGA staff is currently gathering all of the lessons learned from the 225th General Assembly that can be applied to the 226th Assembly,” said Julia Henderson, leader for GA Planning and Business. “In the coming months, the Stated Clerk, OGA leaders and the Committee on the Office of the General Assembly will finalize dates.”

The plenary portion of the 226th General Assembly is scheduled for June 29–July 6, 2024. Items that propose constitutional changes (Book of Order or Book of Confessions) require approval from 84 presbyteries. 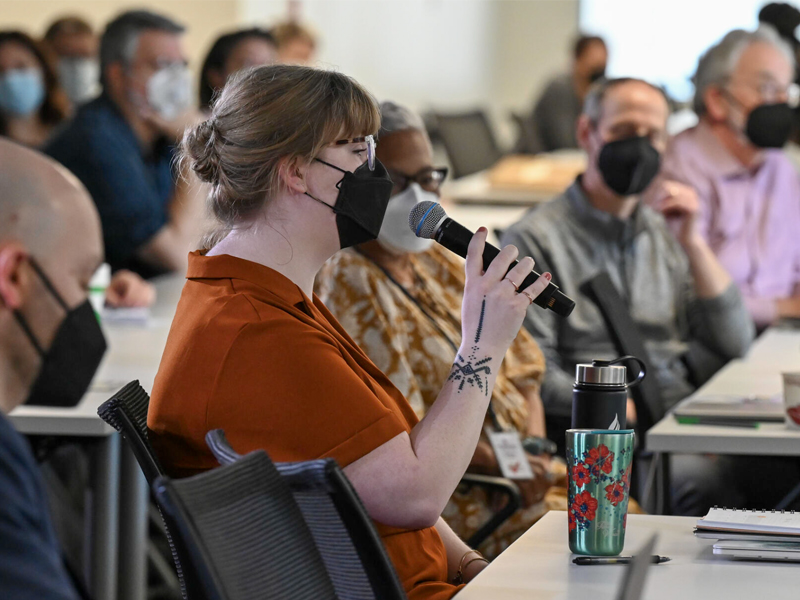 Kate Trigger Duffert, manager of GA Business and Per Capita Promotion in the Office of the General Assembly, answered a question from the audience. - Photo by Rich Copley

“Presbyteries have one year, or July 9, 2023, to submit their votes. Not voting counts as a ‘no.’ In order to open the portal for recording these votes, staff go through the constitutional actions in detail to confirm language, prepare a handbook to the proposed amendments, and then collaborate with Global Language Resources in the Administrative Services Group to translate the handbook,” said Kate Trigger Duffert, manager for GA Business and Per Capita Promotion. “Once that is complete, the voting system in the Stated Clerk’s portal will open. This will likely be in early fall. Regular updates on received votes will be sent to all stated clerks throughout the year.”

Duffert says there will be a final count on which Assembly actions were approved by presbyteries on July 9, 2023. That will allow OGA staff to amend upcoming publications of the Book of Order. Items that require action from agencies, entities or committees following General Assembly begin the referral process.

“In PC-Biz, each item shows the particular Assembly actions that require further work and to whom they have been referred. Agencies, entities and committees begin that work immediately and continue to do so through the next Assembly unless another timeline has been indicated by the Assembly action,” Duffert said. “Prior to the 226th General Assembly (2024), all entities that received a referral will respond in PC-Biz with the actions that have been taken. They will indicate that the item is still a ‘Referral in Progress’ and will take more time, or that this is the ‘Final Response to Referral,’ which indicates that the action assigned has been completed.”

Duffert adds that a document will go to the 226th Assembly with each of the responses compiled for review, but anyone who is interested will be able to see the process fully through PC-Biz — tracking the item from the original submitted text, to the committee’s action to the Assembly action, to the referral and finally the response to the referral.

“This is a new feature in PC-Biz that will enable everyone to see the life cycle of the item and enables us to hold one another accountable to the calls placed by the Assembly,” she said. “The process of assigning the referrals is complete, so now the timeline is just for groups to begin the work.”

For items that established a policy or established a statement on behalf of the 225th General Assembly (2022), the business process is complete.

“Those that were approved are now considered policy of the PC(USA). The social witness of the church does not bind individuals, but reflects the broader church’s witness in the world,” Duffert adds.