During September’s PHS Live, the Presbyterian Historical Society (PHS) welcomed participants in the Building Knowledge and Breaking Barriers (BKBB) archives-based learning project to speak on their experiences working together.

Among these panelists were David Prejsnar, a professor at Community College of Philadelphia (CCP), and Stephanie Santoro, a student exhibitor. PHS also welcomed two of their own into the discussion: public services associate Sonia Prescott, who acted as a research consultant on the project, and reference and outreach archivist Jenny Barr, who served as the archivist liaison for the students and teachers involved. 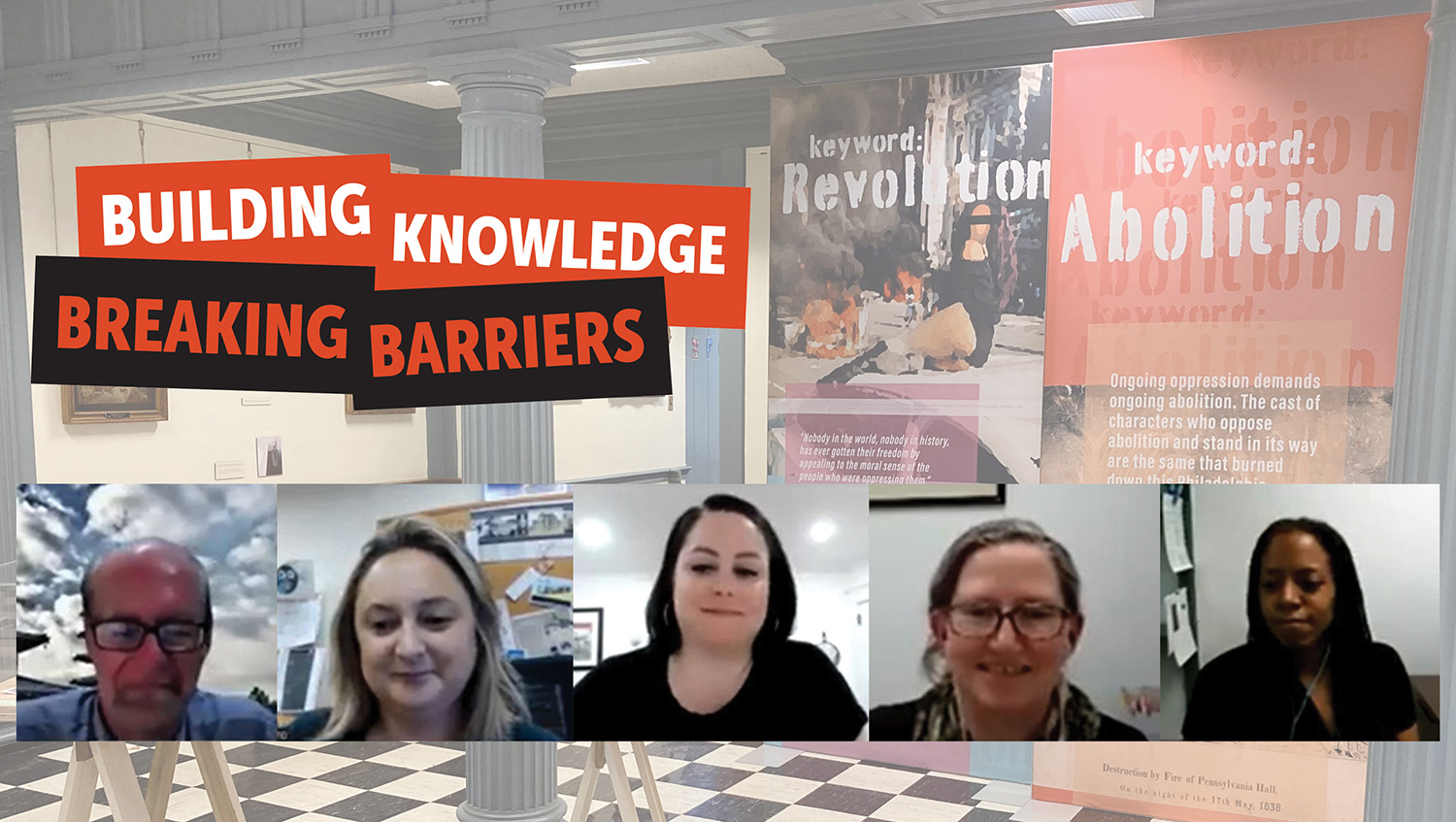 The BKBB website reads, “Building Knowledge and Breaking Barriers grew out of the belief that the Presbyterian Historical Society could create meaningful firsthand encounters between Community College of Philadelphia students and historically resonant documents, build research and critical-thinking skills important to student success in academic and vocational pursuits, and identify ways to assist Philadelphia students and educators more in the future. Confronting barriers to student access and inclusion at PHS was also a main project goal.” You can read more about the origins of this grant-funded project here.

PHS Director of Communications Kristen Gaydos, who also served as the communications coordinator on the project, highlighted the above goals in a brief introduction that outlined the timeline of BKBB, which blossomed from classroom collaboration projects that occurred between PHS and CCP in 2017.

As she spoke of the two-pronged goals of the project — to build knowledge and to break barriers — Gaydos made sure to draw focus to “one of the most persistent barriers: the Covid 19 pandemic.” Much of the work developing and designing the student exhibit was done through distance learning and online communication.

Despite this hardship, from 2019 into 2021, the seven student exhibitors worked collaboratively with each other, PHS staff and outside collaborators to create the various installations both inside the PHS building and on the PHS grounds.

On October 6, PHS is excited to welcome guests to experience in-person the BKBB exhibit — something that has been limited to virtual visitation until now.

Classroom collaboration and introducing students to the archives

Gaydos entered first into a discussion with Dave Prejsnar, a CCP professor who was an early classroom collaborator with PHS, and Jenny Barr, the archivist liaison for the project, about gathering and working with primary sources from the PHS archives.

“I have to say that I feel like I have the best job in this whole project,” Barr began. “Because I’ve been able to work with the instructors and with the students, and a lot with the materials themselves.” She then spoke about conscious collaboration, discussing with the instructors the reach of their curriculum and discovering how broad PHS’s relevant collections scope was while working with different classes. “We’ve really been able to partner with professors in a lot of different disciplines,” Barr explained.

Another important factor in her choosing materials was being mindful of finding documents that were meaningful to the curriculum and that were challenging, but not impossible, for students to master over the course of a single semester.

Barr then spoke briefly of the scope of sources available on the BKBB website — which includes the digitized primary sources made available to the students, as well as a number of source sets that vary in theme and can be utilized by instructors and educators.

Gaydos then asked both Prejsnar and Barr what they thought the students participating in the project took away from visiting the PHS archives. “They’re engaged in something that’s not just a classroom exercise,” Prejsnar responded. “I think one thing is that students are often scared to talk to librarians, and I think just working with PHS has been such a wonderful experience for so many students … if they go into a library or archive in the future, they’ll be much more comfortable.”

When questioned about her role in the BKBB project, Sonia Prescott made it clear that she knew to cater to the students’ interests and ideas rather than her own when looking through the collections with them.

“When students first came in and sat with me, my first thought was, ‘if you don’t have much experience with an archive, what can we do to speak to what you’re interested in?’ It was really important to me that, for them to be invested in the project, that they actually deal with things that were interesting to them.” In the instances when the collection did not produce anything substantial connected to a student-chosen topic, Prescott would apologize and redirect them.

She went on to explain that one of the most challenging parts of this collaborative project was the necessity of restraining her own personal style, opinion and interpretations. “I had to restrain my usual impulse to look at history a certain way, and just say, ‘what do you think, how do you want to tell the story and how can I help you tell the story in the way that you want to tell it?' It allowed me to learn from them, just as much as I hope that they were learning from me.”

Santoro, while sharing her experience working with Prescott and what compelled her to put her exhibit together, said, “We went through a lot more materials that we had to disregard or put aside for future research. It was overwhelming how much you had access to, and so with Sonia’s help I reined it in. The archivists at PHS helped me learn how to build something without going all over the place.”

Gaydos' final question was directed at Santoro: what are some of the challenges and successes that you experienced during the project? “Besides the pandemic completely disrupting our in-person collaborative process,“ Santoro began, “the biggest challenge for me was really wrestling with how to disentangle all these new tensions I was experiencing, with myself and with this history that I was exploring.” In terms of successes, she says that the project helped her in many ways: “It expanded my critical thinking, it made me more articulate…It was just transformative in lots of different ways for me.”

The session closed out after a couple of audience questions with a reminder of the Oct. 6 event, which is free and open to the public, as well as an encouragement to browse the exhibit’s online site at BKBBphilly.org.

Santoro’s exhibit, “keyword: Abolition, keyword: Revolution,” located in the lobby of the PHS building, is one of six installations that can be experienced at the Oct. 6 event in Philadelphia. Other exhibit topics include the Black church, LGBTQIA+ inclusion, representative public art and culture in Philadelphia, and white Christian attitudes toward Asian communities. Register for the event here.