This month in Presbyterian history 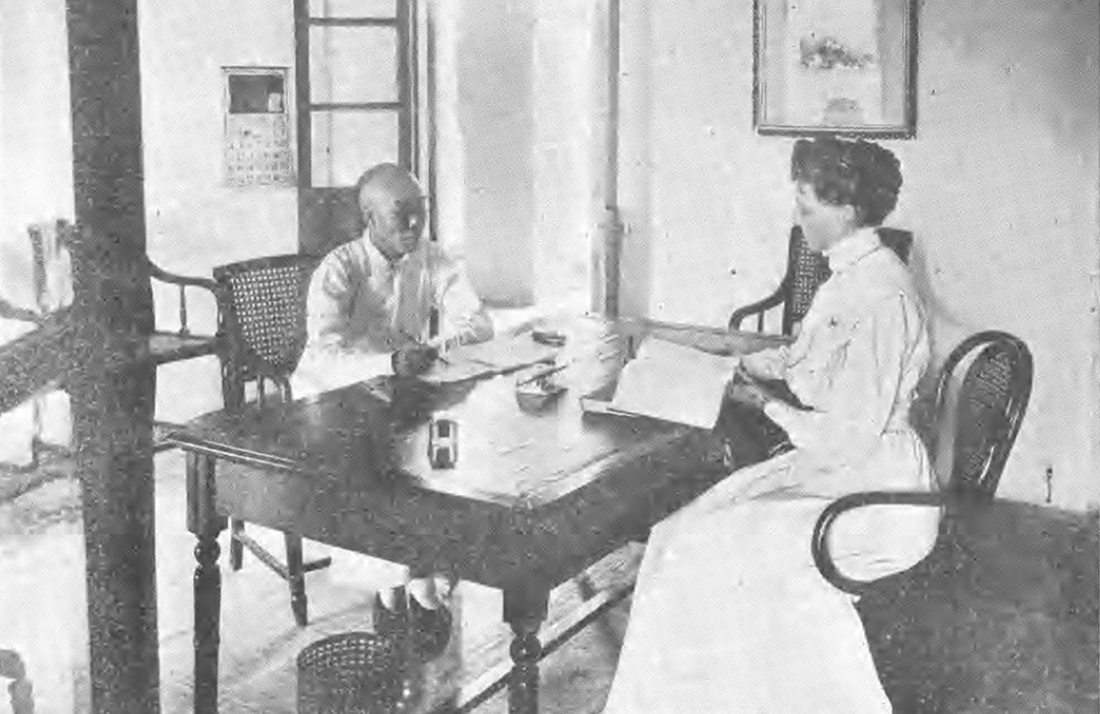 China was the first and eventually the largest mission field of the PCUSA. The first missionaries appointed there by the Board of Foreign Missions arrived in 1838. Though the mission in China was slow to grow at first — residency restrictions making it difficult to settle down, and illnesses breaking out among the group — by 1923 there were eight locations: Canton (South China), Shantung, North China, Hainan, Hunan, Central China, Kiangan and Yunnan.

Fulton was sent to Canton in 1884 to act as a medical missionary. A practicing physician, she made great strides in medical care for Chinese women and children. With the help of her brother, Fulton raised enough funds for the construction of the David Gregg Hospital for Women and Children, which opened in 1901. As she continued to serve in Canton, Fulton’s influence grew. She expanded the hospital, adding the E.A.K. Hackett Medical College for Women, the Julia M. Turner Training School for Nurses and a number of other facilities. 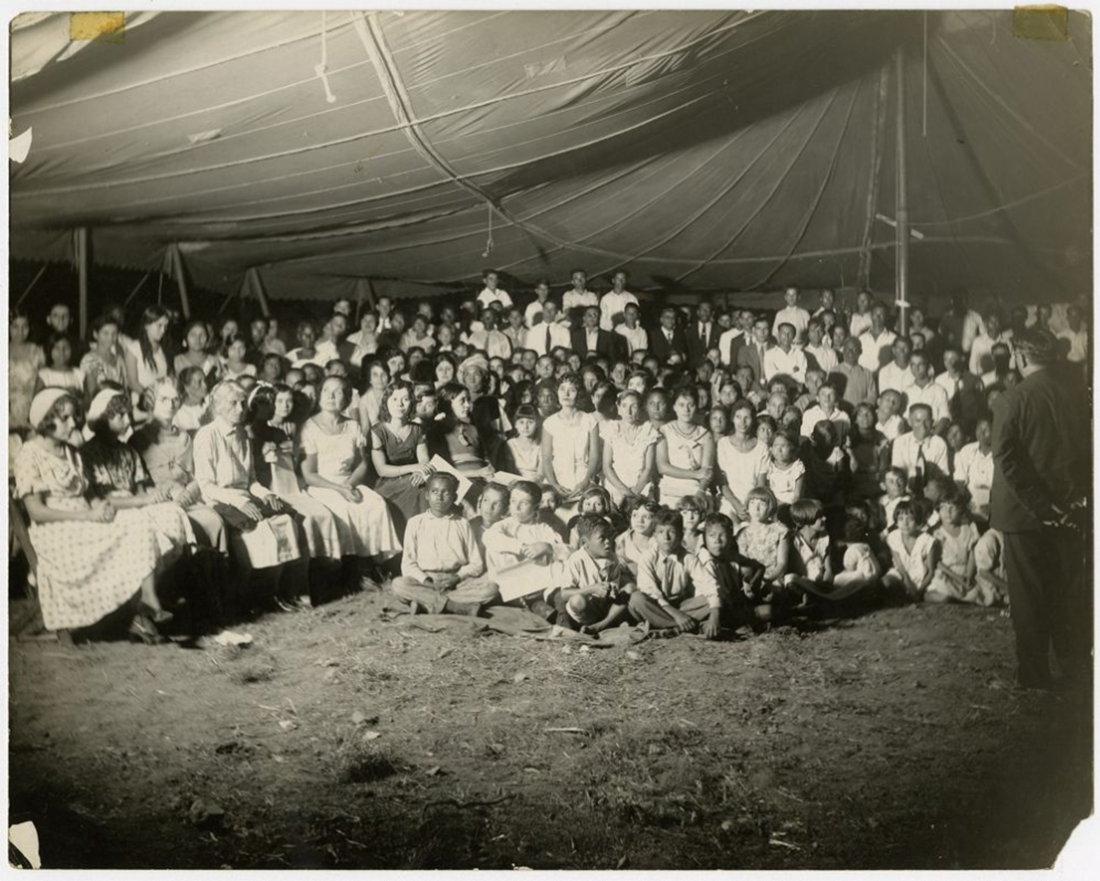 The records of the UPCUSA Support Agency (Record Group 303) consist mainly of photographs from the Program Agency and its predecessors, ranging from the Department of Program Services (1970-71) all the way back to the Board of Home Missions (1920-1923). The above image, one of the earliest within the collection, shows some of the 200 to 300 people who brought an “overflowing enthusiasm” to outdoor worship.

The typed caption is originally in Spanish:

The tent in Hormigueros! … Half of the people who attended the service on Sunday, January 29. … Crowds of more than 200 and 300 people, 50 spontaneous professions of faith and an overflowing enthusiasm. “The fields are ready for harvesting.” … They are so happy and enthusiastic that, since there is not a big enough place for the tent, they have cut trees and knocked down banana trees to make the necessary space. 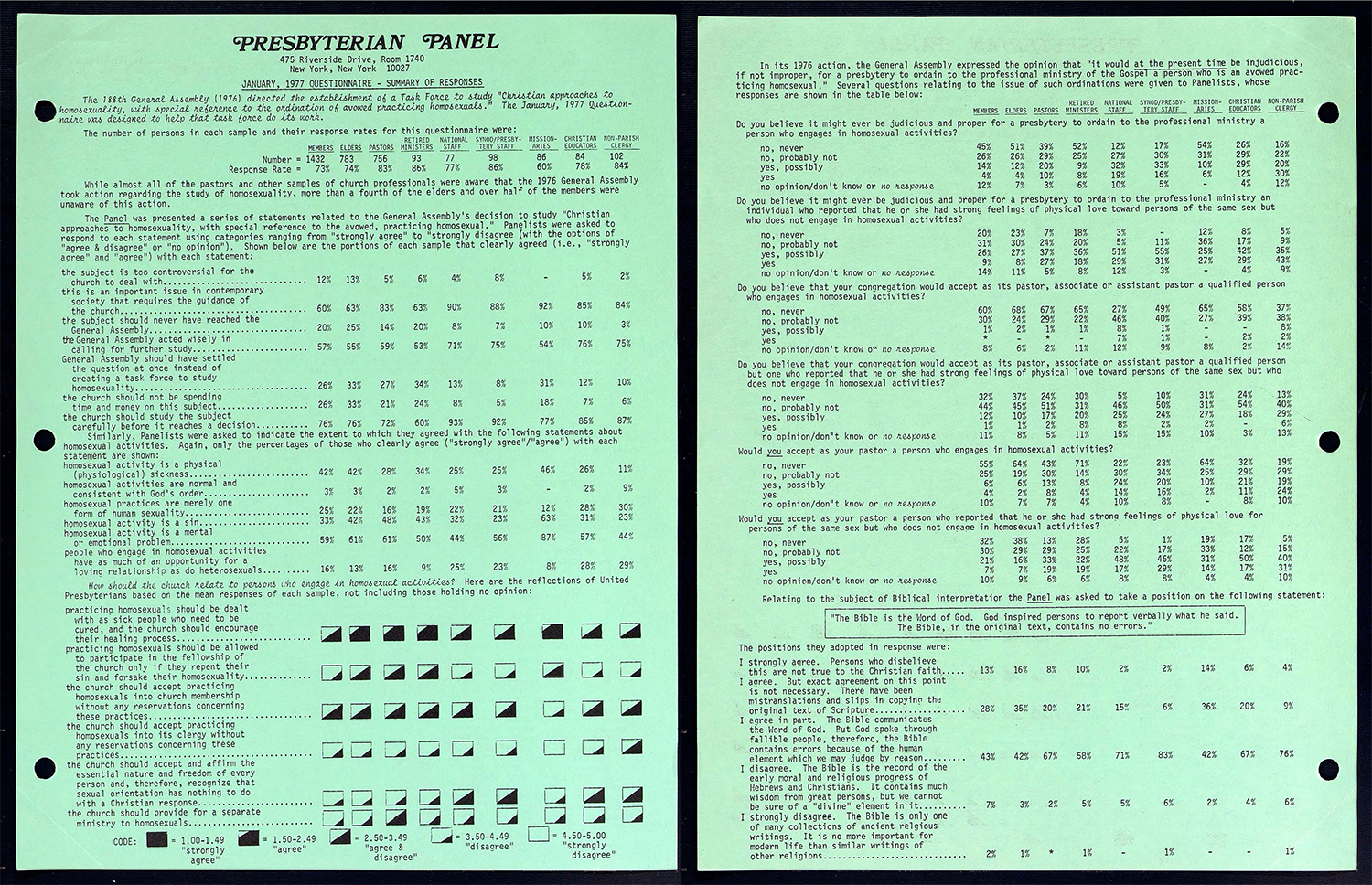 In January 1977, a United Presbyterian Church in the U.S.A.’s task force gathered and summarized responses to a controversial survey.

In response to a flurry of questions concerning the ordination of gay Presbyterians, the 1976 General Assembly of the UPCUSA addressed the topic. Along with analyzing scientific and religious articles on homosexuality and debates over Biblical interpretation, a 19-member Task Force was also charged with studying the general opinions of the church.

In January of 1977, the task force sent out a questionnaire designed to gather opinions of congregants. This summary of responses shows the sample groups who received the questionnaire, including church members, elders, pastors, retired ministers, national staff, synod and presbytery staff, missionaries, Christian educators and non-parish clergy.

Those who participated were presented a series of statements related to the General Assembly’s decision to study “Christian approaches to homosexuality,” and were asked to respond using categories ranging from “strongly agree” to “strongly disagree.” The percentages shown on the form are the portions of each sample group that agreed with each statement. For example, 90% of national staff members agreed that “the subject of homosexuality is an important issue in contemporary society that requires the guidance of the church.” On the same topic, 60% of members of the church agreed.

Read more about the UPCUSA Task Force on Homosexuality: https://www.history.pcusa.org/blog/2018/10/upcusa-task-force-study-homosexuality

Want to learn more about the national archives of the PC(USA)? Get to know PHS!