Home News New worshiping community getting ready to ‘Plant It’

New worshiping community getting ready to ‘Plant It’

Presbyterian Pastor Ben Johnston-Krase never dreamed he’d end up in a dense urban area between Duke University and downtown Durham, N.C. It wasn’t part of the dream he says God gave him more than a year ago. He saw himself being called to a new church. Except when he got there, there was nothing but a farm.

Johnston-Krase told his wife Karla about the dream, then his closest friends from seminary Allen Brimer and Brandon Wert. They’d all been part of a dinner group together at McCormick in early 2000, and since that time, had often talked about one day moving to a community to raise their children and do ministry together.

In March, Johnston-Krase went public with his vision of starting a church on a farm — centered in worship and in the mission for growing and sharing food. He’d just left his pastorate in Wisconsin, and was wondering where Farm Church would be, and where he and Brimer’s children would go to school. Wert, whose wife Jodi had just accepted a job teaching in Singapore, would continue to chime in as an organizing presence for Farm Church despite the 12 hour time zone difference.

“I was amazed at the reaction,” Brimer says, following response from a Presbyterian News Service story about the effort in March. “The Presbyterian world lit up. Almost immediately we had a nationwide search on our hands.” Numerous camps, presbyteries and individuals, all over the country approached Farm Church saying, “consider coming here.”

Johnston-Krase and Brimer began visiting places like Louisville, Chattanooga and Bloomington, Ind. As they talked with people in all kinds venues, including upstate New York, they kept praying — listening for where the spirit might be calling them.

Nearing the end of their discernment process, Brimer and his wife Kerry drove across North Carolina, visiting 33 towns in five days. Always asking, “How long does it take to get out of the city to [farmable] land?” and, “Why would God be calling us to this place?”

When the families finally gathered in July to make their list of pros and cons for a potential Farm Church location, Durham, N.C., rose to the top. “It really caught us off guard but it had all ‘pro’ reasons to go,” says Johnston-Krase. “The only exception — we didn’t have a network of family or friends waiting for us there.”

But Durham had a population center that Farm Church believed could support an eventual congregation hoping to employ two full-time pastors. They could get out of downtown quickly, encountering open land within four miles. While the city has a farmer’s market profile — they find it also has “food desert” and “food security” issues, where “real ministry” could happen.

As Johnston-Krase began to leak the news that Farm Church would be in Durham, he says all kinds of “small miracles” began to happen.

There were people waiting for them after all. Robert and Jane Brawley, who had served at McCormick as New Testament professor and director of admission, had retired there. Along with professor of pastoral care Homer Ashby, who lived there too, they helped Farm Church get in touch with Joe Harvard. The retired pastor at First Presbyterian Church was well connected. He knew everyone in town, and made sure they got introduced, paving the way for a smooth transition.

Johnston-Krase and Brimer quickly realized there wasn’t much rental property available on or near farmland. Even though it wasn’t part of their plan they made a key decision to get enmeshed into the heart of the city.

“It led to so many connections and relationships,” says Johnston-Krase. “If we had lived outside of the city we wouldn’t have had access to these opportunities that were critical in helping us get started.” 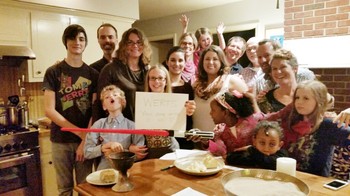 Farm Church was given free office space by Trinity Avenue Presbyterian Church. They’ve established a leadership team that is worshiping in homes around Durham. Already, some of the people in their neighborhood are interested in Farm Church.

“Our kids, who had been there less than a week, walked to the park and began talking to a group of adults about how they were going to go to church with chickens and goats,” says Johnston-Krase. “The adults just loved it.”

Brimer and Johnston-Krase are amazed by the connectional nature of the church. Both say they felt incredibly welcomed by New Hope Executive Presbyter Ted Churn. When they were being introduced at the presbytery meeting, as members at large, the person introducing them realized “they didn’t have any church members to stand with them yet.” One by one those present began to stand with them, saying, “yes they do, we’re your church,” until the entire room was on their feet.

Stories like this sustain Brimer and Johnston-Krase, who are currently living off savings. Brimer has a bit of a cushion thanks the sale of a portion of Kerry’s business, but Johnston-Krase’s are dwindling. Yet, he says, “I’ve never been as exhilarated as I am right now in my ministry.

Brimer is grateful for all of the enthusiasm and prayers for Farm Church, saying he’s thankful to the Holy Spirit for calling them to this ministry. “The pieces come into focus at the right time and place, for the right reasons,” he says. “It is thrilling and humbling at the same time.”

As Farm Church works to develop a steady source of revenue they’re engaged in their year-end “Plant It” campaign at farmchurch.org. And the gifts keep coming.

Recently, people in Durham offered the church urban lots, which means they’re have a place to put seeds in the ground come spring. “That was part of our vision,” says Johnston-Krase. “To partner with the city by using urban land as a teaching tool. We’ll get that started as we continue to work at landing acreage outside of the city limits.”