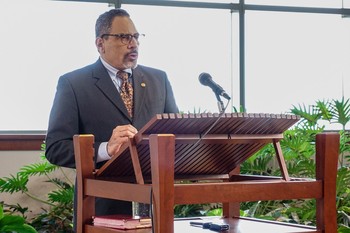 As expectant worshipers entered the chapel of the Presbyterian Center for this year’s Advent service—eager to meet De La Rosa and welcome his preaching and his leadership—each was handed a peppermint lifesaver.

The unexpected token was a tangible reference to De La Rosa’s sermon title, “Lifesavers,” and—unbeknownst to them—to every employee of the six independent agencies of the Presbyterian Church (U.S.A.) housed at 100 Witherspoon Street.

After first offering the congregation a word of apology for his “late appearance” here today—De La Rosa had been expected to begin his new role on Dec. 1—he opened his meditation by unfolding the tale of how his original departure plans “went awry in the bitter cold on that early [Thanksgiving] morning, when a dastardly sidewalk curb snuck up in front of [him] and caused irreparable damage to one of [his] car’s tires.”

As he then described with both humor and poignancy the circumstances of his subsequent Thanksgiving Day “rescue,” De La Rosa said that “all sorts of miracles” came his way.

“Both friends and strangers came through in ways that looking back on it were signs of grace from a beneficent God,” he said. “Satan and his henchmen, Chaos and Disappointment, were not about to have their way.”

Deftly interweaving the story of his own Thanksgiving travel mishap with reflections on the two scripture passages for the day—2 Peter 1:12-21 and Psalm 33—De La Rosa reaffirmed the Psalmist’s conclusion that “God knows best.”

“And sometimes, the intercession of a gracious God means frustrating the best laid plans of humankind, an upsetting turn of events that just may lead to a more fortuitous result,” he said. “The Psalmist knows that God is ultimately wise and loving. Psalm 33 is not a cry of existential resignation. The psalm does not voice anger or regret; it is a hymn of deep, fundamental joy.  God is indeed in charge, and God is good.”

Later in the service—as De La Rosa presided at the Communion Table with the Rev. Gradye Parsons, Stated Clerk of the PC(USA)—the words of his sermon, and its affirmation of the six agencies’ employees, echoed in their joint invitation to the table, in which Parsons named and acknowledged every floor of the Presbyterian Center.

“The people in this building save lives,” De La Rosa said at the conclusion of his sermon. “You serve and preserve a denomination about to embark on a long journey to a place none of us quite yet perceive, but rest assured, God knows…You walk in the footsteps of Jesus, who brings all of us around this table, an operating table of sorts where the wounded and infirm are brought, re-fashioned and made new; a simple, yet holy table that offers us a taste of grace and a glimpse of the light afar on Advent’s horizon.”

Mindful of the Thanksgiving holiday just past and the Advent season, in which Christians recognize their hope in God as they await Jesus’ coming, De La Rosa ended his sermon on a profound note of gratitude.

“Here in this place, we come now with all our chaos and disappointments set aside for sacred moments like these, and we come to get reacquainted with the One who confounds our plans for the better and has saved our lives for all time,” he preached. “Here, we dare to approach and say that one thing that means the world to any lifesaver:  ‘Thank you.’”

A lifelong Presbyterian, De La Rosa most recently served as a commissioned ruling elder and interim lay pastor of Newport Presbyterian Church in Bellevue, Wash. He was commissioned by the Presbytery of Seattle in May 2015 to lead the Newport congregation of over 350 members during their time of pastoral transition.

A former clerk of session at Immanuel Presbyterian Church in Los Angeles, De La Rosa has volunteered for over 20 years on various PC(USA) General Assembly-level entities, including the Advisory Committee on Litigation and the Special Committee on Church-wide Compensation Policy Guidelines. More recently, he worked on the Special Committee to Study Issues of Civil Union and Christian Marriage that reported to the 219th General Assembly in 2010. In 2012, the 220th General Assembly elected him as a Director of the Board of Pensions of the PC(USA). De La Rosa resigned his Board of Pensions position prior to assuming his role at the Mission Agency.

Before serving at Newport Presbyterian Church, De La Rosa was the interim executive presbyter of the Presbytery of New York City where he led a staff of five employees, 223 clergy members and 96 congregations comprising over 14,500 members. During his three-year term of service in New York, De La Rosa led the presbytery to adopt unified financial planning and a reconfigured staff, resulting in a balanced budget.

Prior his work in New York City, De La Rosa served for 10 years with L.A. Care Health Plan, the nation’s largest public health maintenance organization, with over 1.2 million Medicaid, S-CHP and Medicare members. From 1991 to 1999, De La Rosa served as the executive director of the Los Angeles Center for Law and Justice. He managed the agency’s transformation from a storefront legal services program to a prominent advocacy firm for the poor and disenfranchised of East and Northeast Los Angeles.

De La Rosa received Bachelor of Arts, Master of Divinity and Juris Doctor degrees from Yale University. He and his husband, Michael P. Bendgen, have been together over eight years and were married in June 2015 at Immanuel Presbyterian Church. The couple is in the process of relocating from their residences in Los Angeles and Bellevue to Louisville.