Lifelong Presbyterian to lead PMA during a ‘pivotal time’ 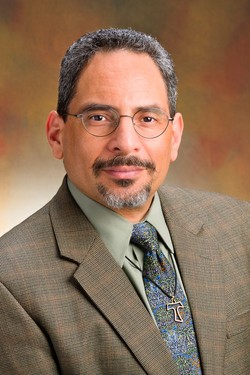 A lifelong Presbyterian, De La Rosa most recently served as a commissioned ruling elder and interim lay pastor of Newport Presbyterian Church in Bellevue, Wash. He was commissioned by the Presbytery of Seattle in May 2015 to lead the Newport congregation of over 350 members during their time of pastoral transition.

De La Rosa is expected to begin his role Dec. 1, 2015. The term of his tenure has not been announced, although Marilyn Gamm, chair of the Presbyterian Mission Agency Board, has indicated the interim may serve up to three years. The permanent executive director of the Mission Agency must be confirmed by the General Assembly, which meets every two years.

De La Rosa’s appointment is a unique one for the Mission Agency: He is only the second Latino, and the first openly gay person, to take the helm of the agency.

“My sense of call leads me toward opportunities within the church that make use of my training in both law and theology,” De La Rosa said via an email interview. “I believe that the opportunity to serve the PMA as interim executive director at this pivotal time in its history permits me to exercise my training and my gifts. I am humbled beyond measure to be asked to lead the PMA into the next phase of its history as the coordinated mission expression of the PC(USA).”

“We are hoping Tony is the person to at least, in part, begin to inject the Mission Agency and the wider church with hope,” said Gamm when questioned why the PMAB selected De La Rosa. “We loved Tony’s energy and his passion for both the Presbyterian Mission Agency and for the Presbyterian Church (U.S.A.) Tony balances healthy realism with creative, out-of-the-box thinking.

De La Rosa inherits an agency facing financial challenges. Gamm has called the impending depletion of supplemental mission budget monies, known as the Presbyterian Mission Program Fund (PMPF), a “fiscal cliff.” PNS previously reported on a projected funding gap of $925,000 in 2016 that could widen to $4.5 million in 2017 as the balance of this fund decreases to its mandated floor, resulting in the recall of approximately 40 of the 162 PC(USA) mission co-workers.

“In our interviews with candidates for the interim executive director we endeavored to paint a realistic picture of financial challenges, and an expected need to be willing to cut both programs and staff,” said Gamm. “To be honest, we see no way around the latter and we wanted to ensure that the candidates understood that these kinds of difficult decisions would be on the interim executive director’s plate.

De La Rosa, the former clerk of session at Immanuel Presbyterian Church in Los Angeles, has volunteered for over 20 years on various PC(USA) General Assembly-level entities, including the Advisory Committee on Litigation and the Special Committee on Church-wide Compensation Policy Guidelines. More recently, he worked on the Special Committee to Study Issues of Civil Union and Christian Marriage that reported to the 219th General Assembly in 2010. In 2012, the 220th General Assembly elected him as a Director of the Board of Pensions of the PC(USA), where he serves on the Assistance Committee.

Before serving at Newport Presbyterian Church, De La Rosa was the interim executive presbyter of the Presbytery of New York City where he led a staff of five employees, 223 clergy members and 96 congregations comprising over 14,500 members. During his three-year term of service in New York, De La Rosa led the presbytery to adopt unified financial planning and a reconfigured staff, resulting in a balanced budget.

Prior his work in New York City, De La Rosa served for 10 years with L.A. Care Health Plan, the nation’s largest public health maintenance organization, with over 1.2 million Medicaid, S-CHP and Medicare members. From 1991 to 1999, De La Rosa served as the executive director of the Los Angeles Center for Law and Justice. He managed the agency’s transformation from a storefront legal services program to a prominent advocacy firm for the poor and disenfranchised of East and Northeast Los Angeles.

De La Rosa received Bachelor of Arts, Master of Divinity and Juris Doctor degrees from Yale University. He and his husband, Michael P. Bendgen, have been together over eight years and were married in June 2015 at Immanuel Presbyterian Church. The couple will relocate from their residences in Los Angeles and Bellevue to Louisville later this year.