By participating in Easter moment with church, neighborhood kids they learn how to actively share the gospel—using words when necessary 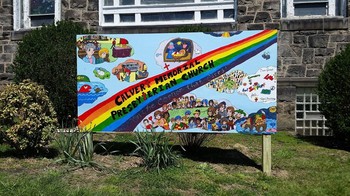 “Art Mural/outdoor sign created by neighborhood kids at Calvert Memorial Presbyterian Church’s after-school program — with images of life in the church and the children who helped create it.”

An intentional young adult Christian community, “ConFluence” being formed at Crestfield Camp and Conference Center recently participated in a transformative moment for an aging Presbyterian Church — and for neighborhood kids in a working class neighborhood.

“ConFluence” began in October of 2015, when Crestfield Program Director Paul Humphreys came in contact with three young adults, who were discerning what might come next in their Christian spiritual journey.

After multiple conversations with Humphreys, Tyler Musher, Lauren Mack and Jeremiah Wagner signed up for a nine-month long internship - principally about them coming together in community to discover through their experiences together where God was leading them.

“As part of our spiritual practices together we decided to offer ourselves as a resource for churches in our Presbytery (Pittsburgh),” says Humphreys. “So far three church have taken us up on our offer.”

One congregation used the young adults at “ConFluence” help during an interim transition period; another needed them for additional support for their Sunday morning children and youth program.

The third congregation, Calvert Memorial Presbyterian Church in Pittsburgh, needed help with their after-school program for kids, “Tuesday Club.” Started by artist Eve Schafer in 2010, those in the church who had helped had all retired or moved away. Tuesday Club and the congregation were in transition. Increasingly the neighborhood kids coming to the after-school program were non-churched, being raised by parents who had were longer actively involved in churches representing the faith of their childhood.

“Yet most of them believed in something,” says Tor Voller, who helps Calvert coordinate the after school program, “because they felt it was important for their children to come to this after-school program.”

For whatever reason, the children (middle school and younger) and leaders at the Tuesday Club hit it off with the young adults from “ConFluence.” Paul Humphreys thinks it’s because they were learning together what he thinks is one of the most important things about the Christian faith. “Are we talking about Jesus?” he asks, “No. Are we talking about Jesus? Yes. Through our actions, using words when necessary.”

“What a pleasure to have Paul, Tyler, Lauren and Jeremiah with us,” says Voller. “We’re grateful for the help they provided and knowledge we learned. It was a blessing to our lives— and to the children.”

This was evident in the Calvert’s recent end of the church/school year celebration for the after-school program. The children had been secretly painting an art mural that would replace the church’s aging outdoor sign that was damaged beyond repair. Only the church session knew about the project.

Finally, on the 4th Sunday of Easter (April 17) the art mural was ready to be unveiled. “They owned much of the worship experience that day,” says Humphreys. “Most of their parents were there to see and experience it with them.”

After worship Calvert had lunch with everyone in attendance. Food was provided by church members and Crestfield, some of which was even cooked by the kids. As they made ice cream cones after lunch everyone got to see what they’d been working on.

As they saw the art mural complete with scenes of life in the church and images of each of the children who had participated in the after-school program, the applause was “thunderous.”  Both church members, and parents were touched by the gifting of this mural as a new sign to the church—and by what they had experienced together in worship.”

“The kids produced something tangible, that they could take ownership of, to give back to the church,” says Voller. “They also warmed our hearts by showing us their faith and spirit through their participation in our service.”

It was a timely gift to the church and to the Etna community. Just 72 hours earlier, there’d been a double homicide in the neighborhood. The borough’s mayor Tom Rengers, was invited and gladly accepted an invitation to be at Calvert that day. He was so impressed that he approached the Tuesday Club kids and leaders, saying, “So what are you doing June 25?” Open Streets community day is held on June 25. The streets are closed off and folks come downtown to all be together. He insisted they come to be part of that celebration, indicating it would be great if they made and served ice cream cones at the event.

“It was really phenomenal to see his and other folk’s reactions,” says Humphreys. “We’re connecting with folks, who are listening to the gospel in action. This is what our kids have done, we can’t miss it. What a joy for us, as a new intentional community, to be with those who see it.”

Frick and Santos, leaders of Camp and Conference, and Collegiate Ministries, respectively, in the Presbyterian Church, (U.S.A.), are collaborating to support efforts of intentional Christian communities for young adults being formed— around spiritual practices, including shared work.

The group, along with 16 other college ministry professionals — including five camp and conference personnel, will travel to the Taize Community in France May 15-23, thanks to a F.I.S.H. Foundation grant. The world-renowned community, which is monastic, ecumenical, and committed to simplicity, is made up of over a hundred brothers, Catholics and others from various Protestant backgrounds, from around thirty nations.