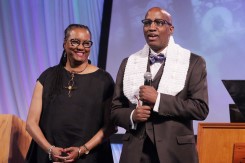 Commissioners to the 222nd General Assembly (2016) selected Nelson over Dave Baker, stated clerk and communications director of the Presbytery of Tampa Bay, by a 447-112 margin.

Nelson, director of the Presbyterian Church (U.S.A.) Office of Public Witness, succeeds Gradye Parsons, who is retiring after eight years as Stated Clerk.

He was installed immediately after his election and will begin his duties Aug. 1.

“This is a powerful day, a powerful day in my life and for many people of color who did not envision the possibility of this ever happening,” Nelson told the assembly, adding he asked only one thing of commissioners: “Pray for me and work with me – and not on me – and we’ll get some things done in the name of the Lord.”

Following the election, Nelson stood arm-in-arm and hand-in- hand with his wife, the Rev. Gail Porter Nelson, as he was being installed.

Parsons reminded his successor that 1.5 million people will be praying for him, and that “this is as much Gail’s ministry as it is yours.”

Some nights, Parsons said, Nelson will go to bed knowing he’s accomplished much. On the nights he doesn’t, “know that you will have the next morning to do it again.”

Both Nelson, the unanimous choice of the nomination committee elected by the 221st General Assembly, and Baker, his only challenger, addressed the assembly for five minutes each before taking questions for more than 30 minutes.

Nelson, 57, said he believes the denomination “is not dying, but I believe we are reforming. Only through the eyes of faith can we see beyond death.”

To think only of the survival of the church “means our aim is too low,” Nelson said. 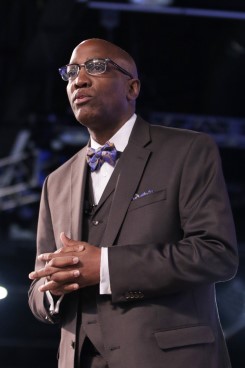 When he was considering whether to seek the job, he spoke with his daughter, Alycia, who advised him to put his name forward “because you are a fixer.”

Those fixes, he said, weren’t “done simply by me, but by a God who held my hand at every turn, a God who promises even now to take all that has been done, put a comma there, and then shift gears to build a powerful future for the PC(USA). Thanks be to God.”

During the question and answer session following their speeches, Nelson said the denomination can “no longer be 93 percent white and expect to grow.” He said each Presbyterian can be “a committee of one” working on the issues that divide them.

Nelson suggested that Presbyterians spend the weeks and months leading up to the next general assemblies in St. Louis and Baltimore – two communities dealing with the effects of police violence – arriving early to build Habitat for Humanity homes and engage in other helpful ministries.

“We are Presbyterians, and we would be celebrated for coming to St. Louis and Baltimore, not just for spending a bunch of money (at the assembly) and leaving the city in the same way we found it,” Nelson said.

“I believe the PC(USA) is at a crossroads,” he said. “The way forward that I see is a focus on the local congregation and the local presbytery. What I would really like to see us do is better outreach, particularly online. It’s something we ought to have been doing 10 years ago.”

During the installation service, Parsons told Nelson that the grace bestowed upon him “is sufficient because it is God’s grace. The assembly was convened to discover God’s will and follow it.” 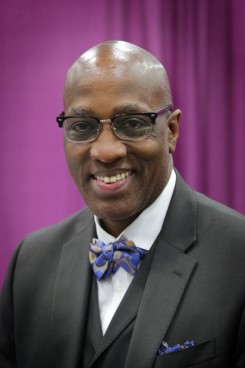 Nelson thanked God “for bringing me up in a place like Orangeburg (South Carolina), where I grew up in a manse with a father and mother who believed in a faith that would not let them go.”

He remembers his father helping to integrate an Orangeburg bowling alley.

“Those two people together now stand in heaven with tears in their eyes. They’re tears of joy,” he said. And if it rains in Portland Friday, commissioners would know just how happy and proud his parents are, he said.

During a news conference following his installation, Nelson said he saw significance in the increasing diversity of national Presbyterian leadership, including the denomination’s two female co-moderators and the interim director of the Presbyterian Mission Agency, Tony De La Rosa, a gay, married Latino.

“I am quite excited about the future of our denomination,” he said. “My intent is to challenge the church to be the church, to go into places different than what we are accustomed to, and to help congregations be a refuge, a way station.”

Once General Assembly concludes Saturday, he said his first two orders of business will be to find somewhere to live in Louisville – his wife will join him once her ministry commitment is fulfilled Dec. 31 – and then take a vacation, “because we both need quite a lot of rest and we need to reflect on what has happened.”

Those conversations, he said with a smile, are more effective on the beach than at home.

He said he’s enjoyed seeing Young Adult Advisory Delegates set the tone for the rest of the church, including dining together with no separate seats based on race or sexual orientation.

“Nobody’s focused on particularities,” he said. “They are modeling right now the role we have to create for each other in order to be viable going into the rest of the 21st century.”

A heavy travel schedule during his six years directing the Office of Public Witness has taught him the value of “a ministry of presence, of being in the place where the conversations are being held.”

Just as important is meeting face-to-face with people when there are problems, he said.

“I am a pastor at heart, although I’m framed as ‘that justice person in D.C.’,” Nelson said. “I learned a long time ago that people don’t care how much you know until they know how much you care. Engaging people where they are will be an important role.”