Group looks at its role in the future of the church 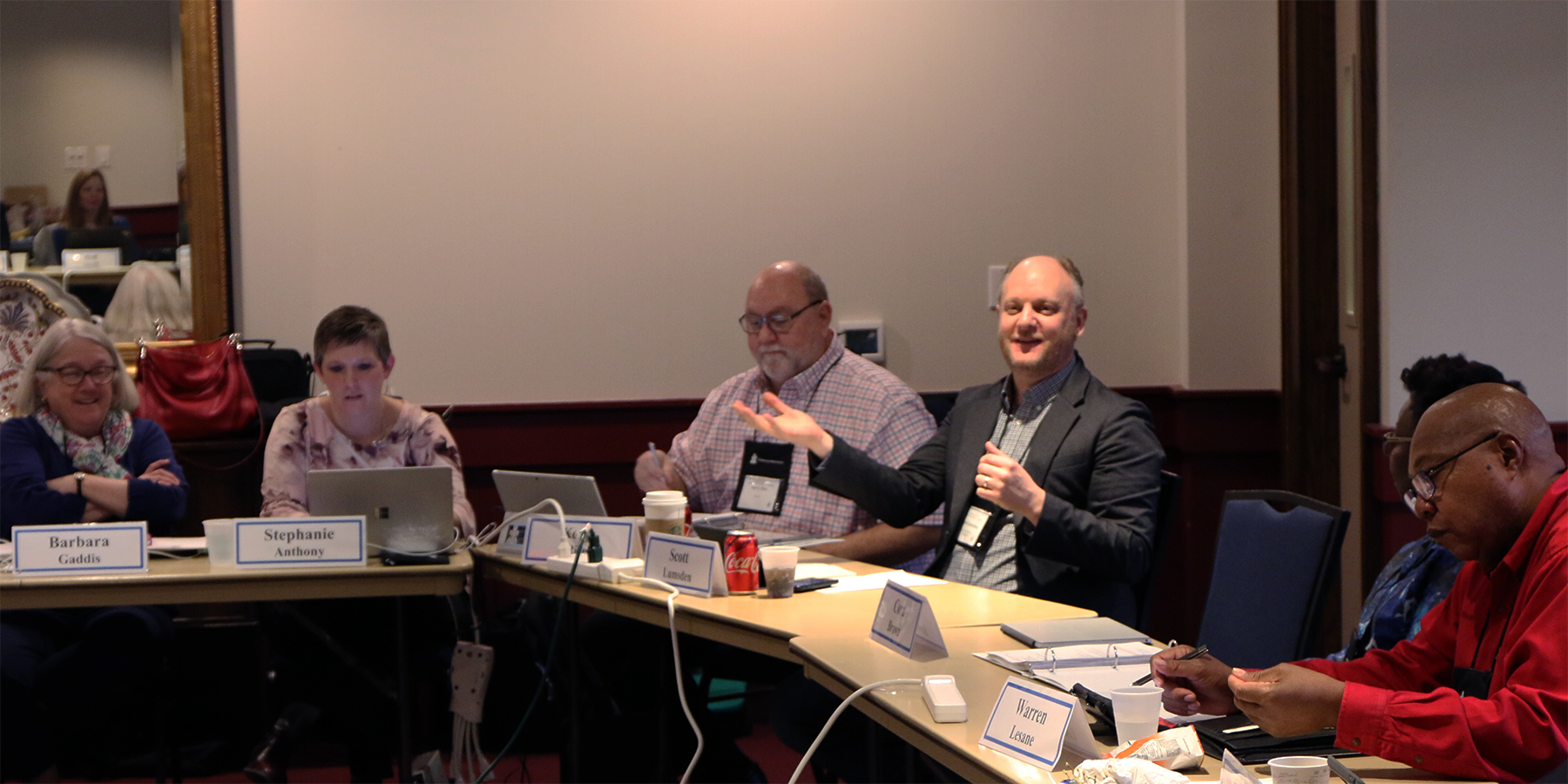 What do we do that no one else does? Are we living up to our mandate as we understand it now? These are some of the questions that the Committee on the Office of the General Assembly (COGA) took up in its first day of meetings this week at St. Philip Presbyterian Church in Houston.

After a brief welcome and opening prayer, the committee jumped into discussion around its work and role, including how COGA can be an instrument of transformation and change in the Presbyterian Church (U.S.A.).

Scott Lumsden, executive presbyter with Seattle Presbytery, led the three-hour discussion, basing the conversation on Acts 9:1–19 and the interaction between Saul and Ananias, as Saul encountered Christ on the road to Damascus.

“We all have a little Saul and Ananias in us and we’re working together,” he said. “The issues are different for each of us, but we have to figure out our roles together. We need each other’s perspectives and the insights from others, including insights from the outside world to determine the best way to move forward as a church.”

Conversation centered around COGA’s role in working with staff in the 21st century church and how to best connect with and serve the needs of congregations. Lumsden said churches and leadership need to be open to being surprised.

Members broke into smaller groups to discuss the issues where COGA could have influence.

“I would hope we could establish protocols for healthy communications around the church,” said the Reverend Warren Lesane, stated clerk of the Synod of the Mid-Atlantic. “It’s clear in many conversations there is a gulf between what’s happening in local congregations, presbyteries, and synods. We need to challenge people to have open dialogue.”

There were as many questions as there were answers among the groups.

“We cannot stop the church from changing. Do I resent, regret, grieve, or celebrate? Do I give up or do I help shape it and respond to change? I have control over how I respond and that will be the bigger question of what we’re doing as the church,” said the Reverend Leanne Masters, pastor of Southern Heights Presbyterian Church in Lincoln, Nebraska. “How do we respond in a way that is faithful as Presbyterians, but also look at the future and what it means to be Presbyterian tomorrow?”

Others discussed the need for COGA to be available to understand what the heartbeat of the church is and how to respond and listen faithfully.

The Reverend Dr. J. Herbert Nelson, II, Stated Clerk of the PC(USA), told COGA it is a “time of contextual change” across the world and that the church will not be relevant in the 21st century if it doesn’t change as well.

“If we are to talk about change in the 21st century, it requires us to build an internal mechanism of teaching and training, but when we get to a place of resistance, we need to be ready to respond,” he said. “I’ve never heard of Jesus trying to find a committee when someone was hungry. I see Jesus going to places of greatest resistance—healing and clothing those in need. He just does it. That’s where we are in the 21st century.”

COGA members agreed to continue the discussions in the remaining two days of their meeting in Houston.

Tags: coga, committee on the office of the general assembly