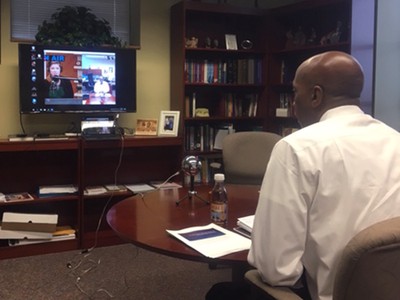 Rev. Dr. J. Herbert Nelson, II, Stated Clerk of the General Assembly of the PC(USA), takes part in Warming Trends, a podcast from the Weather Channel about the role of churches in the climate change debate. —Rick Jones

What role does the human race play when it comes to the earth’s natural resources? Are they gifts from God to use at will, or should people do more to protect what God has given? Those were some of the questions recently asked of the Rev. Dr. J. Herbert Nelson, II, Stated Clerk of the General Assembly of the Presbyterian Church (U.S.A.). Nelson recently appeared on Warming Signs, an audio podcast from the Weather Channel.

Host Kait Parker, a Presbyterian, saw a letter the clerk wrote last fall on the global climate report, in support of climate action. She asked Nelson if organized religion should have a place in those discussions.

“Not only are we creating problems in our own communities, there are predictions we could actually move toward our own destruction if we are not careful,” said Nelson. “You have to take that seriously and cannot pass this off that abusing the earth is a privilege because we are dominant over the earth. God is still dominant and has a calling for us to protect that which has been given.”

Nelson says the PC(USA) defines climate change as a justice issue because of the potential impact on earth’s resources.

“The evidence is there, not simply science, but as our call as Christians to protect the earth. It has been given to us by a God of creation. We have been given dominion, but dominion does not mean domination,” he said. “It means as stewards, we have a responsibility to take care of the earth. We should take seriously the understanding of what it means to be involved in climate and climate change.”

Dr. Katherine Wilkinson, author of the book Between God and Green: How Evangelicals are Cultivating a Middle Ground on Climate Change, agrees with the clerk’s stance.

“I think there is a role for anyone on climate change, but religion has a powerful role to play because climate change is confronting us with big questions about morality, responsibility- the bread and butter of religion,” she said. “Religion can be a space where conversations grounded on values, ethics and beliefs can find a home. It’s helpful to have those conversations in community.”

Wilkinson, who also appeared on the podcast, said the question is how to help those most at risk, especially the poor.

“If you know there’s harm being done, particularly those who really don’t have the means to respond or protect themselves, you have the responsibility to take action and try to support people,” she said. “We already live in a climate changed world and we have to help people respond, adapt and be resilient.”

Nelson says we are already seeing the impact of climate change on our health.

“Look at the increase in asthma and respiratory problems. We can go to science for different issues, but we in faith, try to draw people to the personal aspect of what is taking place,” he said. “There’s a cause and effect for the things we are facing in terms of medical histories. We are seeing the evidence of dying plants, the killing off of some of the food supplies for animals and we have no plausible explanation other than something has significantly changed in the earth and how do we begin to reverse that?”

Nelson says he finds it gratifying that Presbyterians are not standing still, but becoming caregivers or stewards of the earth. “That is where we begin. It is a stewardship question for us. How do we treat it? God gave us the earth for our own survival and prosperity.”