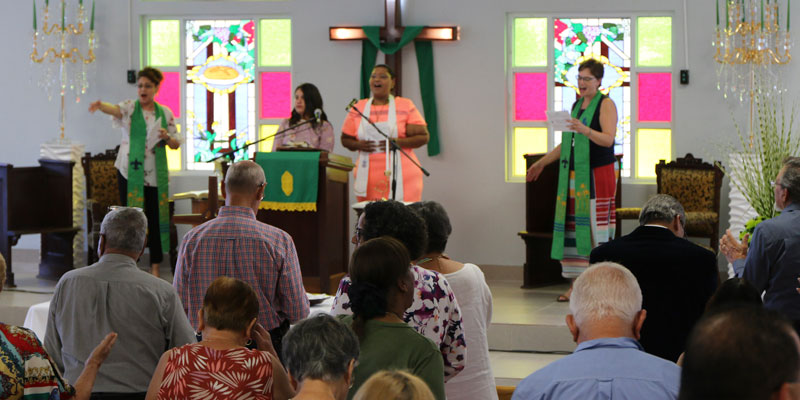 As the political drama continues to unfold in Puerto Rico, the Reverend J. Herbert Nelson, II, Stated Clerk of the General Assembly of the Presbyterian Church (U.S.A.), has voiced support for its citizens and Presbyterians who are calling for change in the government.

“We cannot ignore the political and social violence that has continued to plague our sisters and brothers in Puerto Rico,” said Nelson. “As they face continuing transitions in political leadership, we stand with them, especially our Presbyterian partners in the Sínodo Presbiteriano Boriquén.”

Nelson says the political corruption in Puerto Rico cannot be broken without substantial change in leadership, adding that the church strongly condemns any rhetoric that supports the systemic oppression of people.

The Co-Moderators of the 223rd General Assembly (2018), Ruling Elder Vilmarie Cintrón-Olivieri and the Reverend Cindy Kohlmann, have also spoken on the crisis.

“Please join us in solidarity and prayer for our siblings, mis hemanas y hermanos puertorriqueños, for our plight to be heard, and for justice to 'roll down like waters, and righteousness like an ever-flowing stream,’” they said.

In her sermon at last week’s Convocation for Communities of Color in Baltimore, Cintrón-Olivieri spoke about the crisis in Puerto Rico.

“We continue to pray and to stand with all those who are marginalized … and with our siblings in the beautiful island of Puerto Rico as they continue stepping out in faith, reaching out and touching that robe of justice,” she said. “For the struggle, my siblings, is not over yet.”

The PC(USA) Office of Public Witness in Washington, D.C., has also issued a statement standing in solidarity with Presbyterians in Puerto Rico.

“God has blessed the Church to be a guiding force and source of strength for the Puerto Rican community,” the statement reads. “It is our prayer that nuestros hermanos y hermanas puertoriqueños will remain strong and not be discouraged in their fight for justice.”

In the midst of the unfolding crises over continuing violence against people of color in the United States, we cannot ignore the political and social violence that has continued to plague our sisters and brothers in Puerto Rico. As they face continuing transitions in political leadership, we stand with them, especially our Presbyterian partners in the Sínodo Presbiteriano Boriquén.

The long-standing political corruption that has brought ruin to much of Puerto Rican society and has increased the plight of the poorest Puerto Rican citizens cannot be broken without substantial change in leadership, backed by forthright, compassionate decision-making by leaders in the United States. Too many putative leaders in both Puerto Rico and the United States have preyed on the people without regard for their future well-being and the impact of those efforts is now reflected in the instability from which our Puerto Rican sisters and brother suffer.

A major part of the context for this struggle is the terrible damage inflicted on the island in 2017 by Hurricane Maria, which was exacerbated by the grossly inadequate efforts of the United States leadership to implement a disciplined, fully resourced effort at amelioration and reconstruction. Many of the poorest areas of the island, even today, remain partially inaccessible, with limited utilities and other services. An enduring image of the U.S. effort will be that of the President of the United States throwing rolls of paper towels to beleaguered Puerto Ricans.

Now the people have said “Enough!” and have marched for genuine change. We join our Puerto Rican sisters and brothers in demanding leaders in both Puerto Rico and the United States who are not complicit in the long-standing corruption that has postponed the full development that benefits all the Puerto Rican people. And we pledge to our partners there our prayers, our vigilance, and our advocacy as we work together for legislative and judicial decisions that create a brighter future.