A Statement from the Special Committee on Racism Truth and Reconciliation

The Special Committee on Racism Truth and Reconciliation - June 25, 2020 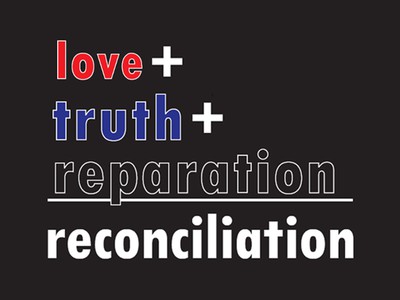 Once again, the United States finds itself at a crossroads in dealing with racism and white supremacy. Racial inequities have been exposed in the COVID-19 pandemic and the murders of Ahmaud Arbery in Georgia, Breonna Taylor in Kentucky, Tony McDade in Florida, George Floyd in Minnesota, and Rayshard Brooks in Georgia. These tragedies have caught the national spotlight, and inequities, racism, and unlawful acts happen to Black, Indigenous, and people of color on a daily basis.

As followers of Jesus Christ, who loves all and calls us to challenge the unjust structures of church and society, we are called to work for justice and peace for all God’s people.

While recognizing that racism victimizes many different racial ethnic groups, we acknowledge its unique impact on the African American community. Given the particular forms that anti-black racism has taken in the United States of America both historically (including slavery and Jim Crow) and today (including mass incarceration, disproportionate policing, economic inequality, and continuing acts of racially oriented violence and hate), we state clearly: GOD LOVES BLACKNESS. Too many have denied this basic truth for too long. Our choice to align ourselves with love and not hate requires both a rejection of racism and a positive proclamation that God delights in black lives.

The PC(USA) Special Committee on Racism Truth and Reconciliation calls for justice for those who have been and continue to be impacted and injured by the unjust structures of racism and oppression.

We call for our denomination and society to commit to engaging in the work and practice of eliminating racism.

We call the Presbyterian Church (U.S.A.) to a season of repentance for its complicity in the horrific history and unjust treatment of people of color, which continues to this day.

We call for white people to recognize their privilege in society and engage in the work of eliminating racism and racist acts against people of color.

The Special Committee on Racism Truth and Reconciliation continues to lift up condolences and prayers for the Arbery, Taylor, McDade, Floyd, and Brooks families, as well as Black, Indigenous, and people of color communities. We commit to amplifying not only “the voices of those long silenced,” but also the voices long ignored.

The Special Committee on Racism Truth and Reconciliation is charged with conducting a churchwide listening campaign “to hear the voices of peoples long silenced regarding the state of institutional racism and oppression within our church.” The special committee will report the results of its listening campaign as well as a statement of findings and recommendations to the 225th General Assembly (2022) in Columbus, Ohio. The Reverend Dr. Byron Wade and Ruling Elder Marta Pumroy serve as the special committee’s co-moderators.

Author: The Special Committee on Racism Truth and Reconciliation