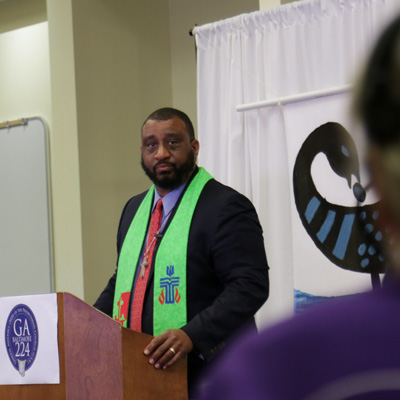 Following a heady morning session—in which the Reverend Dr. J. Herbert Nelson, II, was elected to a second, four-year term as the Stated Clerk of the General Assembly of the Presbyterian Church (U.S.A.)—the fourth plenary session moved immediately from an air of celebration to the serious consideration of amending the Presbyterian Church (U.S.A.) Child/Youth/Vulnerable Adult Protection Policy and Its Procedures, one of three business items originally scheduled for assembly action prior to the midday recess.

Before the break, commissioners voted 465-1 to approve the policy as further amended by the assembly. Among the four amendments passed by the body were two related to removing ableist language in the policy rationale. In introducing the first of the two related amendments, the Reverend Brian Entz, teaching elder commissioner, Presbytery of the Twin Cities Area, recommended alternate phrasing to replace the term “crippled by” with more inclusive language. “I just want that word [crippled] to be taken away,” he said.

The assembly resumed at 1:45 p.m. with an opening prayer by Karla Diaz, commissioned ruling elder and pastor of Londonderry (N.H.) Presbyterian Church, Presbytery of Northern New England. Following a poignant rendition of the African American spiritual, “Nobody Knows the Trouble I’ve Seen,” Diaz called the church “to love our neighbor and each other until no one experiences a knee-on-the-neck feeling anymore.” Her prayer and remarks were followed by a memorial moment delivered by the Reverend Dr. Diane Moffett, president and executive director of the Presbyterian Mission Agency, and a brief video honoring the life of the Reverend Joan Salmon Campbell, who died in 2019. Salmon Campbell, Moderator of the 201st General Assembly (1989), was the first African American woman elected to that office following the 1983 reunion of the northern and southern streams of the Presbyterian church.

Before taking up a full docket mostly related to theological education, the assembly approved by a vote of 469-4 an amended motion to revise the bylaws of the Presbyterian Church (U.S.A.), A Corporation. An amendment calling for an increase in the number of members on A Corp’s Board of Directors to eighteen rather than the proposed fourteen, failed. The second of the two reports from the General Assembly Nominating Committee was declared approved by unanimous consent.

After Co-Moderator Elona Street-Stewart passed the gavel to Co-Moderator Gregory Bentley, he delivered a prepared, joint statement concerning what they called the “discord related to the relationship that the University of Redlands Graduate School of Theology/San Francisco Theological Seminary has to the Presbyterian Church (U.S.A.).”

While acknowledging this as an important issue not to be diminished, Bentley said that the assembly would be limited in its capacity to fully address and resolve such a complex matter.

“There are many issues the church is facing today—and we don’t think that this assembly wants to be defined by this conflict in this time and place, when so much of the world is in pain and yearning for a word of hope,” their statement read in part. “Therefore, Elona and I are committing ourselves and the office that we now hold to call both parties together as soon as possible after this assembly to continue conversations in earnest in an attempt to settle their dispute. If need be, we will engage a mediator to assist us.”

In other business Saturday afternoon:

The plenary session closed with prayer shortly after 4:00 p.m., and the assembly stood in recess until 4:30 p.m.