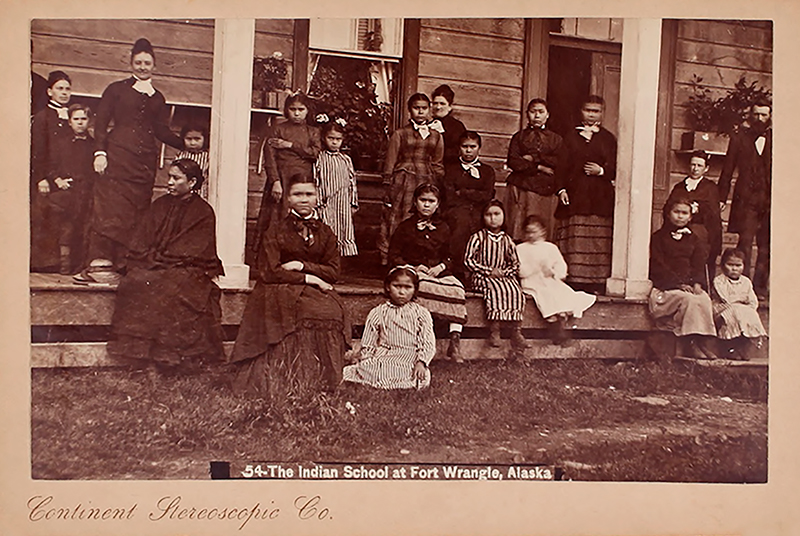 During conversations with Alaska Natives, the Presbytery of the Northwest Coast and Juneau’s Northern Light United Church, the Rev. Bobbi Neason learned that one resource would go a long way toward increasing understanding of the history of Presbyterian-affiliated residential boarding schools in Alaska: a list of Native students who were enrolled at those schools.

Without knowing the names of students, the schools’ impact on individual Native Alaskans could not be gauged, and attempts to understand and atone for harm caused to Native communities by the schools delayed.

Federal and denominational church entities established most Native American residential boarding schools in the 19th and 20th centuries. Experiences varied by school, but many demeaned Native culture and forced assimilation, including banning Native language and spiritual practice. At some schools, children were enrolled against their families’ wishes.

Over the summer and fall, attention was raised about the legacy of residential schools following the discovery of 751 bodies in unmarked graves at a former residential school in Saskatchewan, Canada. Kaitlin Curtice, writing for the Religion News Service, noted that U.S. Secretary of the Interior Deb Haaland has announced an initiative to investigate boarding schools in the United States, “which will reveal a part of our history we seldom talk about in schools, government or churches.”

“Nothing can be healed until we collectively name the wounds we are dealing with as a nation,” Curtice wrote. “I hope we can begin to name those wounds.”

Neason, who is pastor at First Presbyterian Church in Petersburg, Alaska, set out to begin compiling the list of students who attended residential schools in Alaska. When she couldn’t find the information online, “the first place I turned was the Presbyterian Historical Society,” she said.

PHS has thousands of cubic feet of records and other archival materials that connect to the history of church work with Native communities, including Sheldon Jackson’s planting of congregations and schools throughout the Northwest and Alaska. But when Neason contacted the national archives of the PC(USA) there was no list of Presbyterian-affiliated Native residential schools for researchers to start exploring. Without such a list, it would be difficult to know which collection items to examine for specific information.

This week, PHS has announced the creation of just such a list: the Guide to Presbyterian-affiliated Native American Schools.

The guide’s digital availability will help researchers like Neason and others who have contacted PHS to find out more about Presbyterian involvement in residential schools — specifically what materials about that history can be found at PHS in Philadelphia. The guide will also help Indigenous people, Presbyterian congregations, mid councils, and the national church further reckon with the church’s complicity with the Doctrine of Discovery in different states and mission fields.

Since the 222nd General Assembly in 2016, the PC(USA) has sought to address historic injustices toward Indigenous peoples harmed by the Presbyterian Church and its exercise of that doctrine.

According to a Gender and Racial Justice page of the Presbyterian Mission Agency website, “laid the groundwork for the genocide of Indigenous peoples around the world; the colonization of Africa, Asia, Australia, the Pacific Islands, and the Americas; and the transatlantic trafficking in persons used as slave labor.”

In a blog post announcing the new guide, Kristen Gaydos, PHS Director of Communications, wrote that the online resource “offers brief histories of each school (including alternative names the institutions have been known by) as well as a list of the society’s collection materials that speak to the history of the school. Categories of schools include early mission schools, on and off-reservation boarding schools, day schools, agricultural and industrial schools, and higher education schools.”

Some guide entries connect to Pearl Digital Collections, where scans of archival materials, including institutional records and photographs, can be explored remotely.

“This is very much a work in progress,” said Natalie Shilstut, PHS Director of Programs and Services, who developed the guide with Charlene Peacock and Sonia Prescott, members of PHS’s reference team. “Information will be added as we look into more of our collection materials and databases.”

“Links to finding aids and other digital resources are included in the guide,” Shilstut said, adding that there are several schools that will be included after additional research can be done to confirm their connection to the church and provide historical background.

Although Neason’s question predated the guide, she was helped by PHS Records Archivist David Staniunas, who located inside Record Group 301.3, Board of National Missions, Alaska Records collection materials that included the names of children who attended Presbyterian residential schools.

Staniunas worked with Allison Davis, Digital Collections Specialist, to digitize the most promising leads and share the scans with Neason, who began looking through them on her computer in Alaska.

In an email update to Staniunas, Neason mentioned some of her findings from looking inside those digitized materials, including a list of student names from the school newspaper (The Verstovian) for Sheldon Jackson College. “Most years include a complete student list with home community noted. I’ve gotten through about 35 pages, about a fifth of the very large file, but will work through the rest.”

Neason plans to share the completed list with the Presbytery of the Northwest Coast and the Northern Light United Church Native Ministries Committee, groups that are looking at ways to address historic racism against Native Alaskans.

Recently, the presbytery passed an overture drafted by Northern Light United Church about the closure of Memorial Presbyterian Church, a majority Tlingit congregation in Juneau. Scanned records of Memorial (more information is here) were examined while researching the overture.

Learn more about the PC(USA)’s repudiation of the Doctrine of Discovery here.