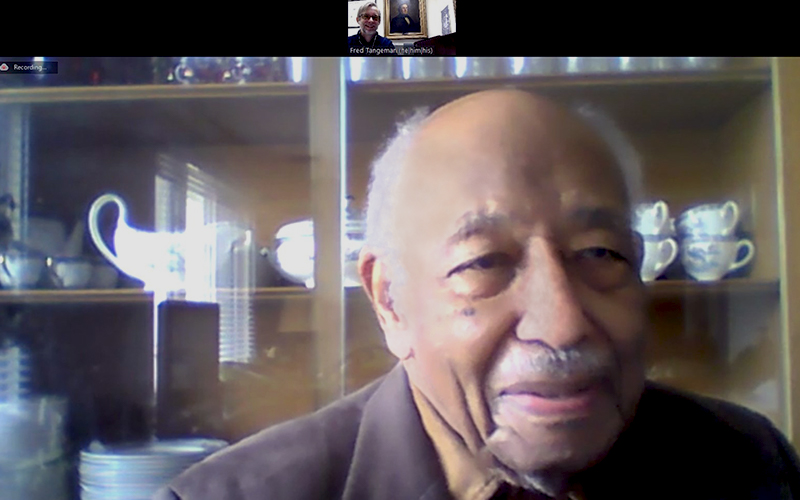 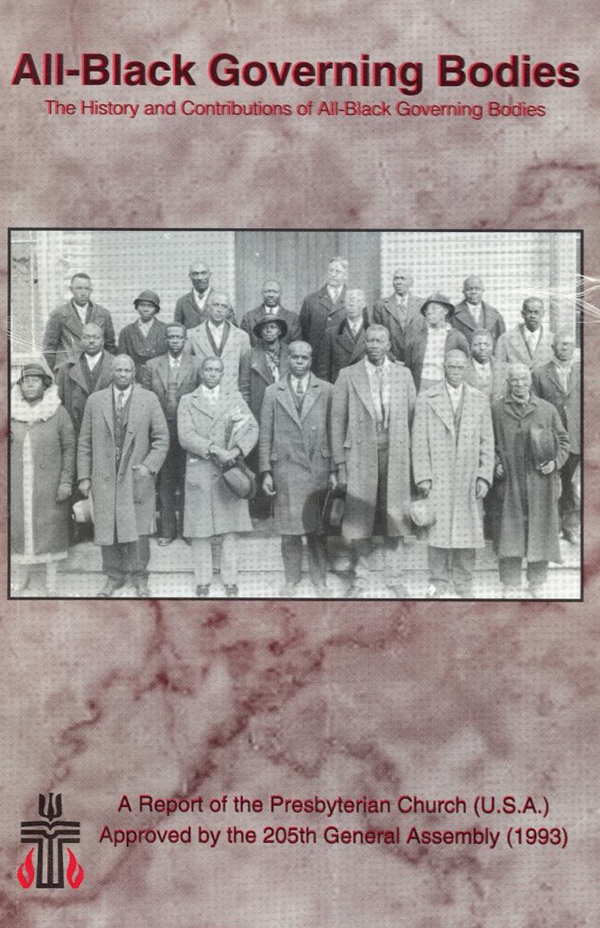 January 2021 marked the 25th anniversary of "All-Black Governing Bodies," a groundbreaking work of denominational history that grew out of a General Assembly overture. At the end of 2021, the Rev. Dr. James Foster Reese, chairperson of the task force that researched and wrote the book, remembered the project during a Zoom interview.

Reese, who is 97 and lives in West Hartford, Connecticut, spoke with impressive recall about the six General Assembly cycles it took to complete the book. Dr. Darius Swann, who joined the effort in 1991, provided research assistance to Reese and six other task force members. Staff at the Presbyterian Historical Society (PHS) helped gather research materials, including church records, photographs and maps. Other Office of the General Assembly staff coordinated task force meetings and publication details.

Reese spoke for more than an hour about the project, its many helpers, the history detailed inside "All-Black Governing Bodies" and some ways today’s church can further support racial ethnic ministries.

As he answered questions, Reese’s face moved in and out of focus on the Zoom screen even as his preacher’s voice remained measured and clear, summoning conversations and organizational milestones from decades before as if they had happened last week. He mentioned being the last living member of the task force and appreciated the renewed attention "All-Black Governing Bodies" was receiving.

Many of Reese’s remarks connected Presbyterian history to today’s America, where Langston Hughes’s line “Let America be America again” — referenced in "All-Black Governing Bodies" — has an uncanny resemblance to a recent political slogan. “America never was America to me,” Hughes wrote in that same poem, and yet, “its dream lies deep within my heart.”

All-Black governing bodies worked to make the dream of America real for all Presbyterians, something the church is still trying to achieve. 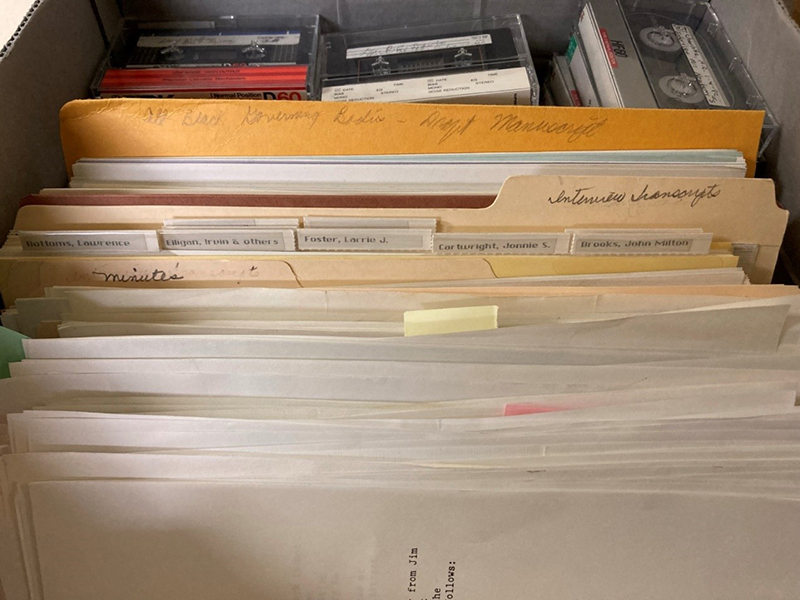 All-Black governing presbyteries emerged after the Civil War, when African Americans, many newly emancipated, set about founding congregations and schools throughout the South. The three largest Presbyterian denominations — the Southern PC(US), the mostly Northern PCUSA and the mostly midwestern UPCNA — established Black mid councils to support the new ministries. A large number of mission workers from the PCUSA and UPCNA assisted that work, including at schools that grew into institutions of higher learning such as Barber-Scotia College, Johnson C. Smith University and Knoxville College.

But all-Black mid councils also isolated African American Presbyterians away from white congregations, seminaries and mid councils —denominational centers of power. "All-Black Governing Bodies" shares stories of how African American presbyteries thrived despite this separation and periods of neglect or outright oppression. The book is ordered by historic era, with anecdotes about mid council and congregational life — such as the Rev. Joseph Metz Rollins’s civil rights work at Trinity Presbyterian Church in Tallahassee, the attempted formation by E.W. Williams of an independent African American denomination and the educational pioneering of Lucy Craft Laney — that bring historical figures into sharper focus.

A sermon Rollins delivered about pressure Trinity Presbyterian Church received from church officials to stop supporting desegregation efforts was added as an appendix. Its inclusion was one of many suggestions the task force received as it drafted and revised the book. 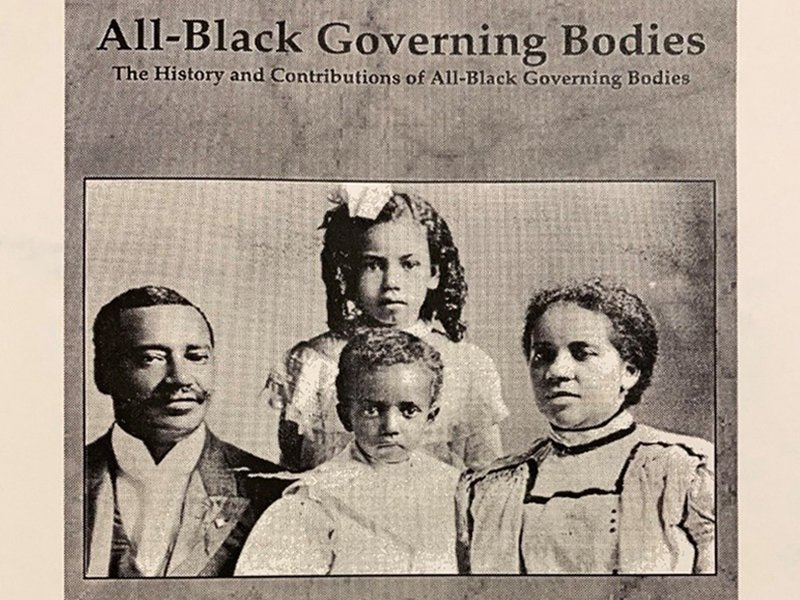 The 201st General Assembly (1989), in response to Overture 89-2 from the Presbytery of Arkansas, directed the Rev. Dr. Joan Salmon Campbell, Assembly moderator, “To appoint a task force of not more than six [persons] to document the history and contributions of all-Black presbyteries of the South.”

Soon after that summer’s assembly in Philadelphia, Salmon Campbell selected Reese as task force chairperson. At a later assembly the task force became a special committee, and the scope of the project was widened to include historical information about all-Black synods.

Over Zoom Reese pointed out that, despite the additional latitude, "All-Black Governing Bodies" ended up focusing on presbytery history. He said that a deeper look at all-Black synods — and the history of all racial ethnic synods inside the PC(USA) and predecessor denominations — would be a worthy sequel.

Reese said that Salmon Campbell likely picked him as chairperson because of their previous work together, including through the Presbytery of Philadelphia. In 1989 Reese was director of the national church’s Racial Ethnic Ministry Unit. At a previous posting with the General Assembly Mission Council, Reese worked with ordained women of color, including national church leaders such as Salmon Campbell and the Rev. Dr. Katie Cannon.

“I think that the naming of other people on the committee was also done by her,” Reese said of Salmon Campbell. 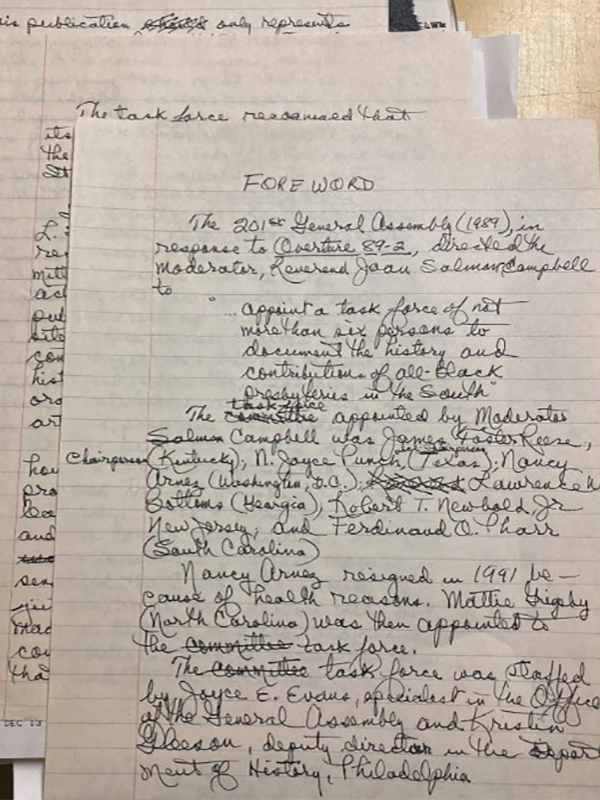 With Reese as chair, the task force pored over available church records, including documents collected at PHS’s two locations at the time, in Philadelphia and Montreat, North Carolina. A problem was the lack of documentation. The task force “was unable to locate a single meeting docket from an all-Black mid council,” Reese said, and the records of PCUS-affiliated Black congregations were extremely difficult to find. Some records were eventually found at other repositories or congregations.

Reese remembered one especially helpful trove of histories from Johnson C. Smith Theological Seminary, where students had stored dissertation theses about congregations, mission fields and all-Black mid councils. He noted that one of the task force members, Mattie Solice Grigsby, had been a librarian at Johnson C. Smith. Reese thought the theses were eventually sent to Atlanta University, a recollection supported by Worldcat listings of Atlanta University Center microfilm.

The years of research and editorial work went smoothly, Reese said. Task Force/Special Committee records at PHS show Reese being consulted about the final title, art selection and line edits. An early draft of the book’s foreward is in his handwriting.

Reese’s undergraduate years at Knoxville College and graduate work at Pittsburgh-Xenia Seminary gave him insights into the UPCNA, leaving him well positioned in the ‘80s and ‘90s to chair a PC(USA) task force comprised of Presbyterians from the three major predecessor denominations. Four of the final task force members had worked in the UPCUSA prior to Reunion in 1983, Reese said, and two in the PCUS.

"All-Black Governing Bodies" shows that the UPCNA’s Women’s General Mission Society energetically supported Black congregations and schools in the parts of the South where that denomination was present. Across the denominational mission schools for Freedman founded after the Civil War — institutions that would be centers of Black Presbyterian life into the 20th century — most of the teachers were women.

Reese said that during the civil rights era the UPCUSA was well organized in its support of all-Black mid councils, creating a climate where close personal relationships could form among pastors, church members and national staff. As "All-Black Governing Bodies" emphasizes near its end, that closeness helped develop generations of African American leaders who went on to lead church agencies and General Assemblies, including Salmon Campbell and the Rev. Lawrence Bottoms, moderator of the 1974 PCUS assembly in Louisville and a task force member. The book is dedicated to Bottoms, who passed away shortly before its publication.

“There was a holy pride in being able to help these persons,” Reese said about the closeness of all-Black mid councils. His own pride in that group history has helped him remember details large and small.

“The third Sunday of each October was the meeting time for Tennessee Presbytery,” he said. That mid council last convened 64 years ago, during the Eisenhower administration. 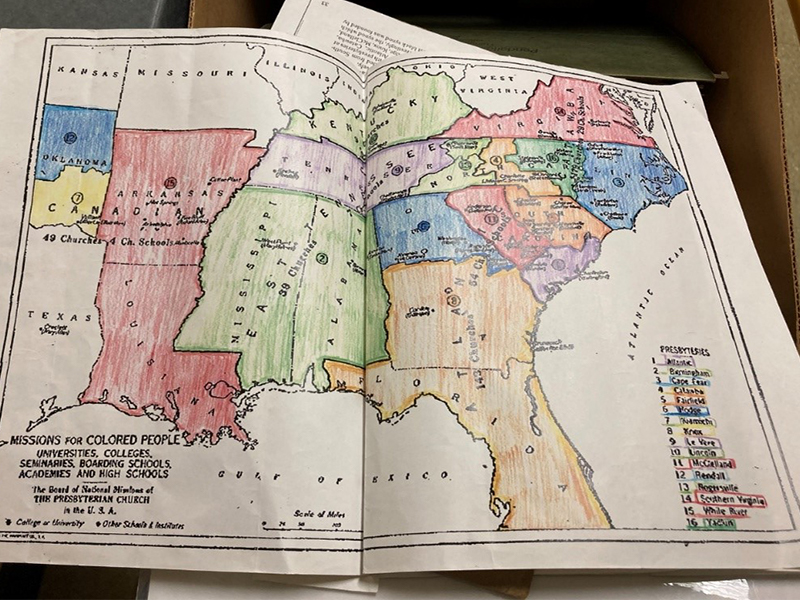 “There was a tendency to want to turn the page on the history of those groups,” Reese said. “In doing that, something was lost.”

"All-Black Governing Bodies," dating back to Overture 89-2, gathered and shared that Black Presbyterian history — a history that even in the late 1980s was at risk of receding into the distant past.

Reese sees a through-line between the experience of researching and writing "All-Black Governing Bodies" and the PC(USA)’s approach to supporting racial ethnic ministries today. The biggest struggle faced by the task force, he said, was convincing the General Assembly between 1989 and 1995 to continue funding the project.

Reese said that the Racial Ethnic Ministry unit he directed ended after five years due to funding changes. “I was the first, last and only,” director, Reese said.

From the 1990s on, Reese held other positions with the national church, mid councils and Germantown Community Presbyterian Church in Philadelphia. In 2019 he retired from the position of Minister of Specialized Interpretation with the Presbyterian Foundation. 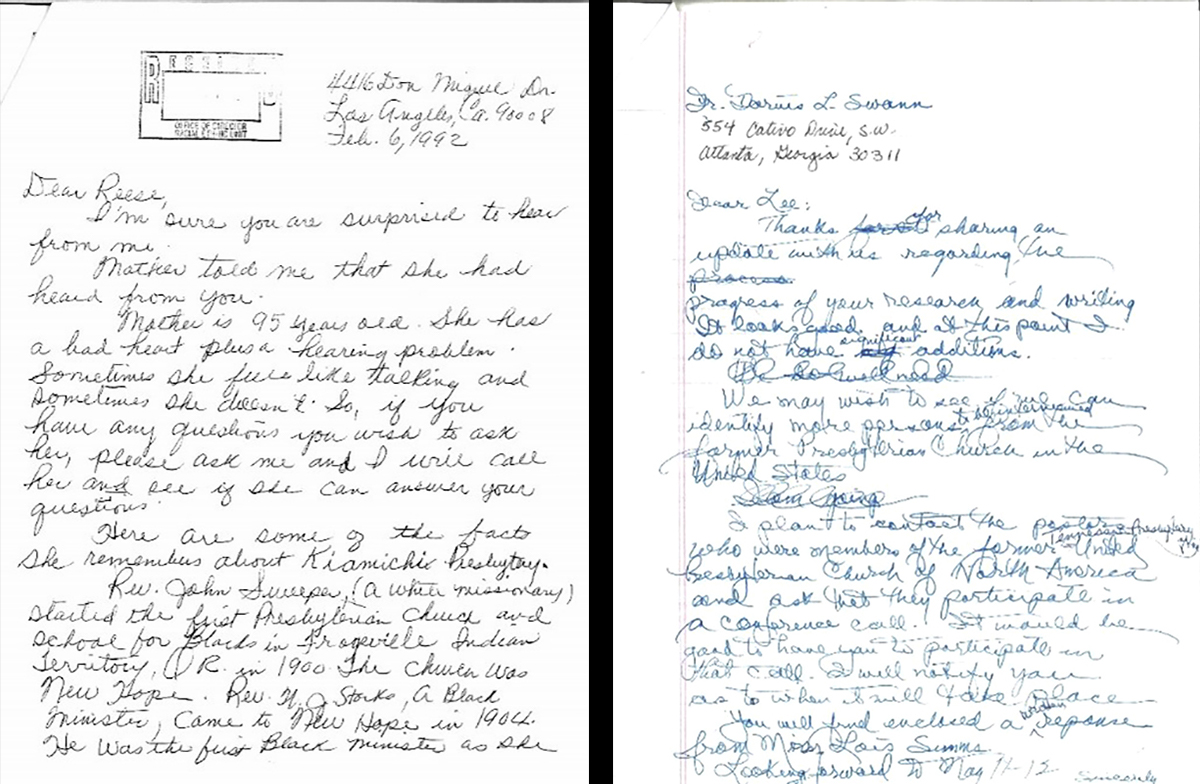 Today’s PC(USA) supports racial ethnic ministry through offices such as the Presbyterian Mission Agency’s Racial Equity and Women’s Intercultural Ministries and the Office of the General Assembly’s Committee on Representation — a permanent committee that "All-Black Governing Bodies" points out in its concluding “Facing Forward” chapter was created during reunion “to ensure minority representation within organizational structures at all levels” of the church.

When Reese was asked if the church’s current financial support of racial ethnic ministry is adequate, given the scope of work, he said, “No, I don’t think it is adequate. That’s my opinion.”

Later he joked that financial support is always crucial to ministry, whatever its focus. “You want some free advice? Find money!”

As the church emerges from the pandemic, Reese hopes to see a rededicated effort to support racial ethnic ministries, both financially and programmatically. Using his own region as an example, he said that conducting a survey of racial ethnic congregations active in the Northeast would be a good step toward “making those congregations more inclusive in the life of presbyteries and synods.” Reese noted that this idea came up at a recent meeting of the National Black Presbyterian Caucus he attended as an NBPC board member. NBPC has continued the connectional tradition of all-Black mid councils, affirming the ministries of African American church leaders and congregations.

Another area Reese would like to see more progress in is the continued lack of Black pastors leading white congregations, and the lack of white pastors leading Black congregations. Allocating resources toward future church building and educating more BIPOC seminarians are other priorities he discussed.

As a last interview question, Reese was asked what he thought was the most important legacy of "All-Black Governing Bodies" 25 years after its publication, one of his many contributions to the history of the PC(USA).

“I would like people to remember that there was a time when all-Black governing bodies were necessary,"Reese said, "and they filled that need by providing the leadership necessary for the church.”