Bridging and bonding toward inclusion

“Practicing Inclusion,” the most recent webinar in the Leader Formation series, offered ruling elders and deacons a chance to learn about implicit bias. The 90-minute Zoom gathering also gave practical advice on group approaches to working through that common obstacle to inclusion.

The Leader Formation series is managed by Mid Council Ministries (MCM) in the Office of the General Assembly (OGA). Jihyun Oh, Director of MCM, gave the main presentation. Martha Miller, Manager of Ministry Education and Support, facilitated this and previous Leader Formation webinars. Miller is also a certified Christian educator and a ruling elder.

After the meeting Miller reported that 144 people had registered for the webinar and nearly 60 participated. “We’ve found that many people register thinking that is the only way to get access to the recording," Miller said.

In reality anyone who cannot attend the live webinar can watch the recording later. Access “Practicing Inclusion” from the Leader Formation webinars page.

After a Native land acknowledgment from Miller and an invitation for participants to type their own land acknowledgements into the chat, Oh began her presentation.

“It is so good to be with you this evening to talk about how we might practice inclusion within the church and create spaces of belonging,” she said.

After pointing out polity and theological supports for inclusion work — including the Book of Order’s F-1.0404 (“church members share with all humanity the realities of creatureliness, sinfulness, brokenness, and suffering…”), 2 Corinthians 5:16-17 and Galatians 3:27-29 — Oh said that being “heirs according to the promise” means that Presbyterians are able to relate across differences and across power dynamics that could put us in different places from one another. 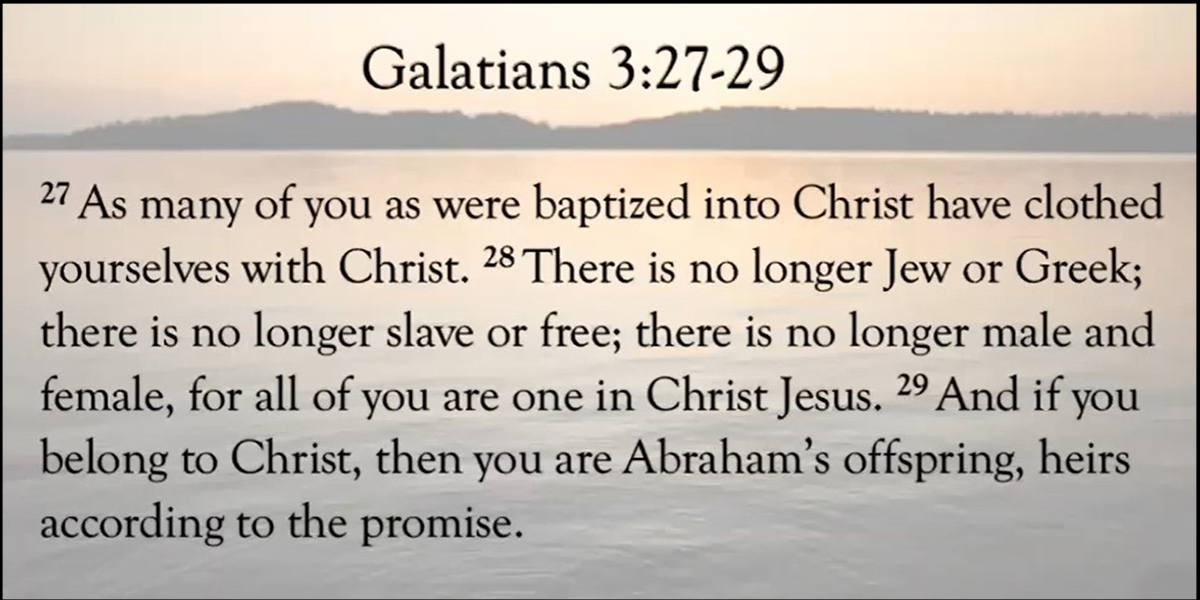 “We are made one, united but diverse,” Oh said, adding that it is important to remember that people can be united, and belong to one another, without being the same.

From there she asked, “What can get in the way of full participation?” Participant responses displayed in real time as a word cloud: 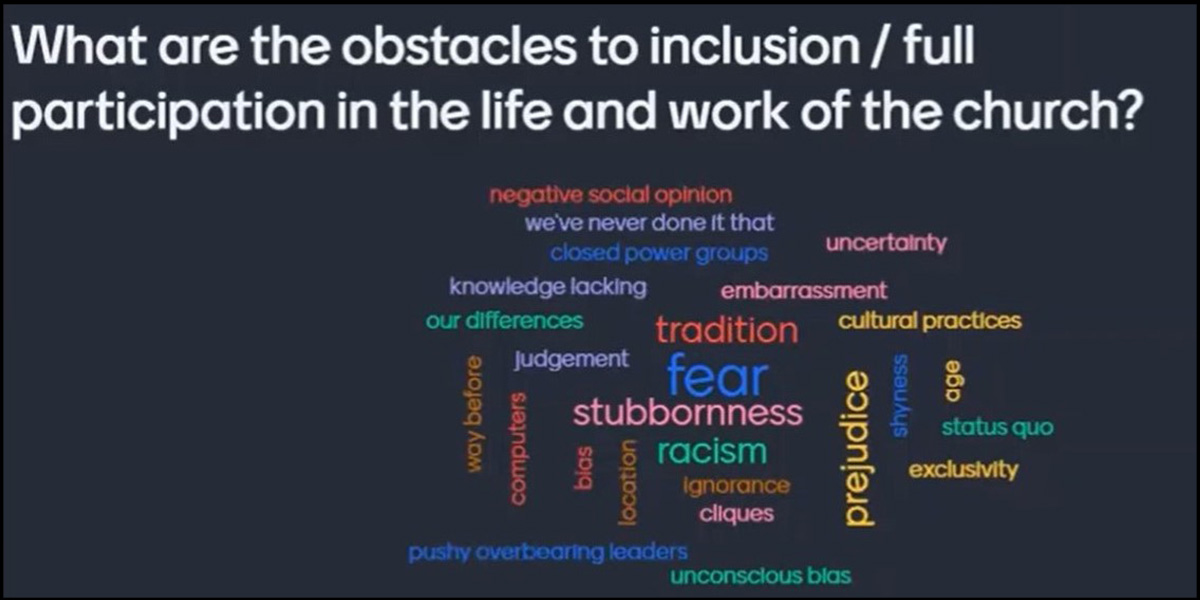 Oh said a lot of the obstacles identified above are attributable to implicit bias, which she then defined as a “relatively unconscious or automatic association towards a group, which may be in direct conflict with one’s explicit beliefs and values.”

Implicit bias is so common in part because it can feel helpful in the moment, expediting decision-making. Leadership selection can be informed by implicit bias, as can classifying people as objects of mission instead of partners in mission. Implicit bias can also prejudice individuals and groups toward maintaining a status quo, “because things have always been done that way,” Oh added.

Implicit bias is especially concerning for churches looking to connect with new members of their community. “Unconscious biases may be causing us to exclude those we want to welcome,” Oh said.

From there she turned to practical steps that can allow churches to “remain open to the people who are bringing us new ideas,” including adopting universal design concepts, arranging for non-participants to observe how meetings are proceeding, using “Informal Procedures for Small Boards” when operating with "Robert’s Rules of Order" and making sure that nominations and other forms of participation achieve diversity.

Before the webinar Miller had explained that interest from ruling elders and deacons about using equity primes at congregations was one of the reasons the MCM team wanted this presentation to focus on inclusion. Equity primes used at the General Assembly are currently being adapted for use at local churches and will be shared later online.

Oh mentioned that introducing minute pauses during committee discussions at GA225 had proved a simple way to create room for new voices and help persons process information — including individuals using interpretation. Building in short pauses, or postponing votes until after those most impacted by a decision are heard from, can result in more inclusive decision-making and greater buy-in from the whole community.

“Inclusion-building tools and approaches not only break preexisting associations in the brain,” “Oh said, “but help to form new ones.” That works for worshiping communities the same way it does for individuals.

Near the end of the webinar, Oh compared the inclusion work of today’s churches to the “bridging and bonding” that happened between communities in the early Christian church.  “We also see from the biblical witness that it was really hard work.”

Fitting the webinar’s topic, Oh paused to ask participants what doing this work could mean for their church or presbytery and observed that their responses, which again formed a word cloud, were more hopeful than the early answers about obstacles. 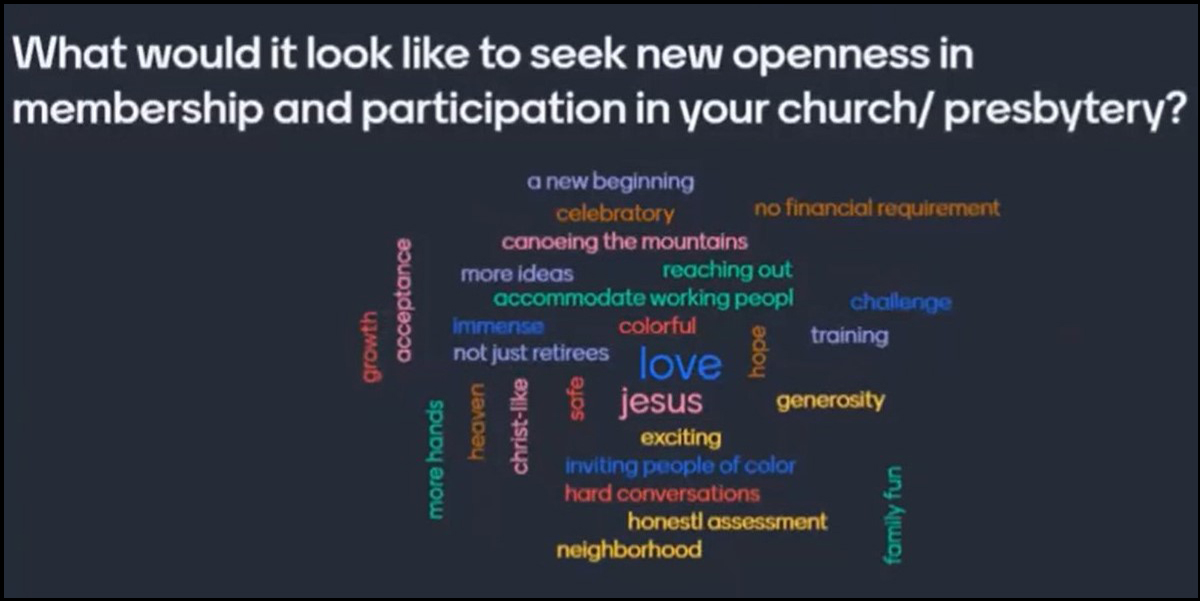 Oh said that the question posed in the slide was also one that the staff of the Office of the General Assembly is continually asking itself, and one of the reasons she and others from the Leader Formation team were pleased to be able to share about inclusion during the webinar.

In closing, Oh answered questions from audience members read by Miller, including questions about the state of inclusion instruction at seminary, how women on a church session might communicate with a male pastor and how outreach efforts can build partnership and not a sense of exploitation.