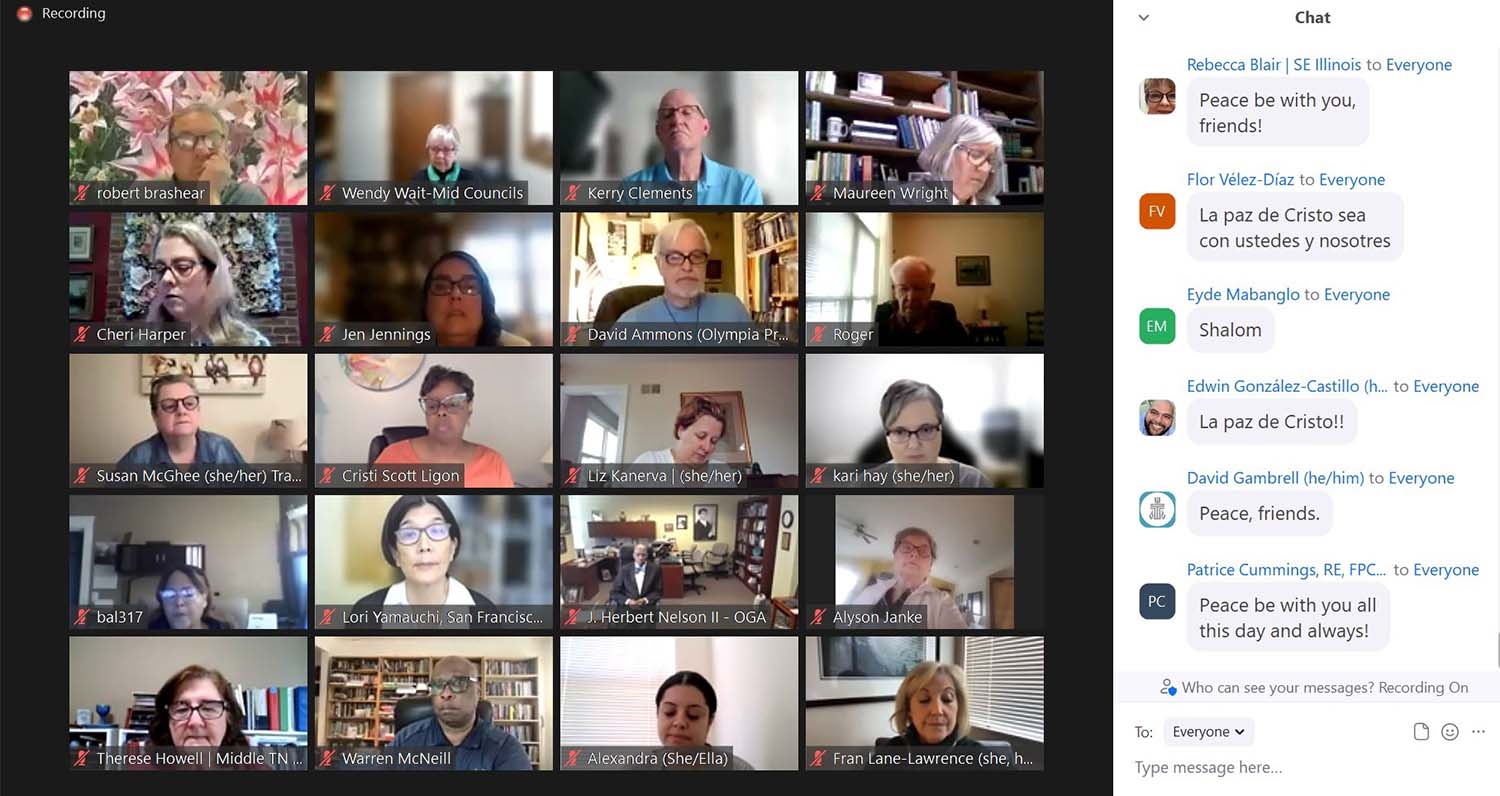 Leader Briefing II for committee moderators and vice-moderators of the 225th General Assembly took place online Tuesday and Wednesday, with more than 100 participants hearing from GA staff and applying their learning to the drafting and submitting of committee agendas through PC-Biz.

The trainings picked up where Leader Briefing I left off in March. The third and final Leader Briefing will have a hybrid format and take place June 18, the day the Assembly begins. Commissioners and advisory delegates will travel to Louisville for committee hearings on a staggered schedule, with plenary sessions occurring online.

Nelson alluded to historic and pandemic-related struggles in the church, and encouraged leaders to continue innovating alongside national staff up to and after the Assembly.

“The 21st century demonstrated to us we couldn’t be the church we used to be. God in many ways used the pandemic to help us see a new way of living and being a church in the 21st century," Nelson said.  “Faith has led us here. Faith will lead us through this Assembly.”

Kathy Lueckert, President of the Presbyterian Church (U.S.A.), A Corporation, updated leaders on renovations to the Presbyterian Center, including new welcome, rest and meal areas; a new production center for video recording and broadcasting, an improved air-handler system; and new conference rooms.

“This project has included a significant investment in technology,” Lueckert said, equipping the spaces for enhanced use during and after the Assembly. She showed photos of nearly completed spaces, as well as 200 seats covered in tarps that will soon be arranged for the in-person parts of the Assembly. An upcoming meeting of Mid-Kentucky Presbytery at the Presbyterian Center will be a chance to “work out any bugs” with the renovated spaces.

Committee moderators and vice-moderators heard from the lead contacts for this summer’s slate of advisory delegates, who serve on Assembly committees alongside commissioners.

Jeff Moles, leader of the YAAD Program Team, said that this summer’s Youth Adult Advisory Delegates are ages 17 to 24 and include high schoolers and seminary students. YAADs have full votes in committees.

Dr. Dianna Wright, Director of Ecumenical Relations in the Office of the General Assembly (OGA), said Covid is complicating international travel, with some overseas travelers having difficulty obtaining visas. Wright and Moles encouraged moderators and staff to be in touch with delegate teams throughout the Assembly, letting them know how advisory delegates are experiencing committee work.

Throughout Tuesday’s presentations, Julia Henderson, leader for GA Planning and Business Management in OGA and the Leader Briefings moderator, pointed out multiple roles presenters have during GA 225. One example is Martha Miller, manager for Ruling Elder Resources and Educator Certification in OGA. She helps with PC-Biz during plenary votes in addition to serving as primary committee contact for Theological Seminary Advisory Delegates.

The Rev. Tricia Dykers-Koenig, Associate Director for Mid Council Relations in OGA and Assembly parliamentarian, led a discussion on parliamentary process, building off a training moderators and vice-moderators completed earlier. She delved into the nuances of minority reports and standing rules and shared a parliamentary procedure quiz and two case studies that leaders discussed in breakout groups and full session. The case studies gave leaders a chance to talk through the kind of scenarios they could face during committee work. 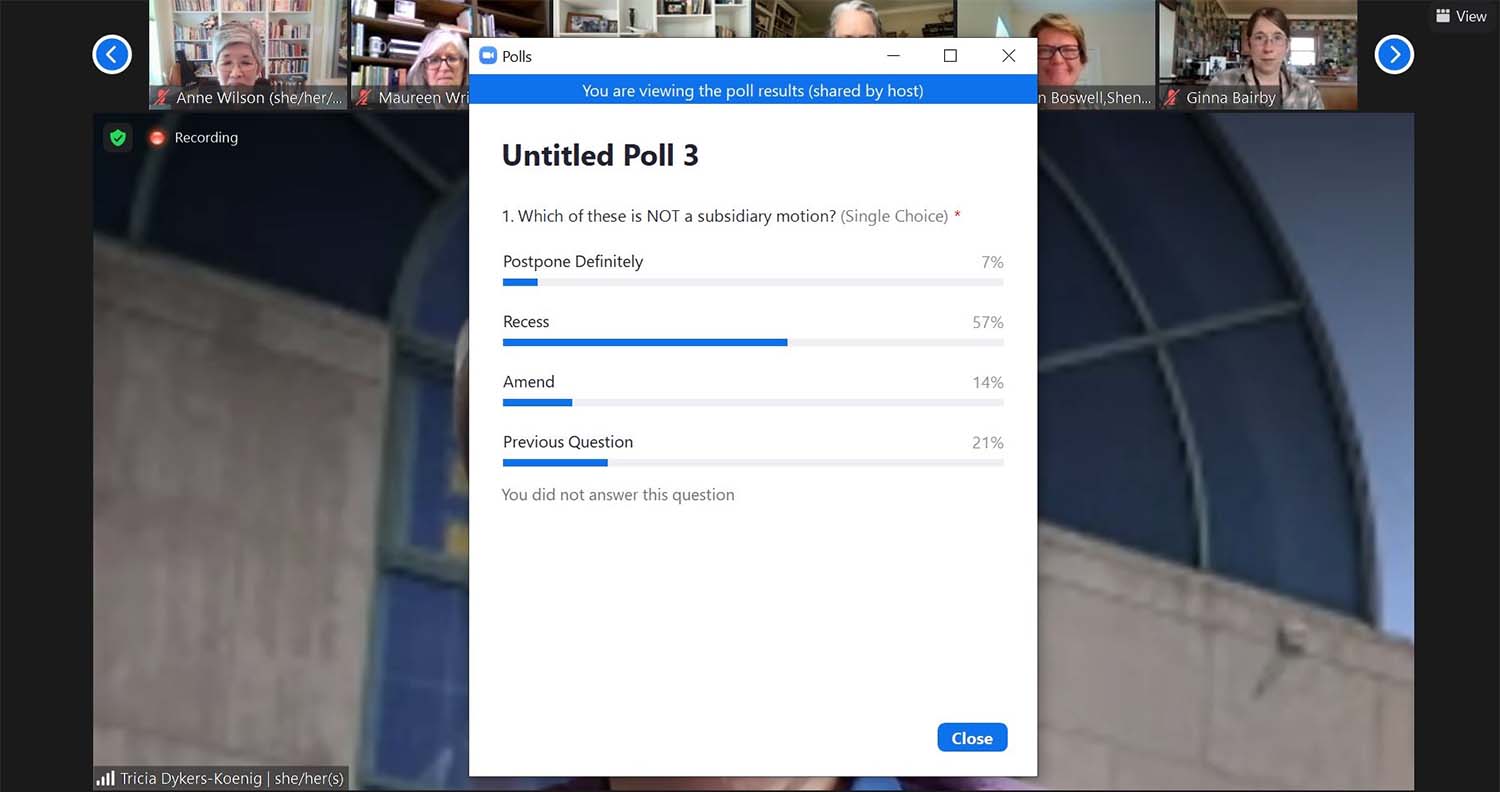 “Recess” is the correct answer, parliamentary process quiz, May 3, 2022.

Dykers-Koenig brought up something she had heard a committee parliamentarian say about Robert’s Rules of Order — that they are not an end but a means. “If the rules get in the way” of dealing satisfactorily with business before committees "we are probably doing it wrong,” she said. Throughout Leader Briefing II leaders discussed using Robert’s Rules to encourage wider participation.

Dykers-Koenig then teamed up with Tim Cargal, Manager of Preparation for Ministry & Examinations in OGA, to discuss the overture advocate process. Overture advocates will make their presentations to committees over Zoom, Cargal said, with advocates being encouraged to pool and coordinate presentations when possible. Information about the revamped overture advocacy and public hearing process can be found on the GA225 connections page of myGA.

Committee Assistant James Tse talked about preparing committee agendas, with each committee needing to set aside time to hear presentations by special task forces of the church, overture advocates and national church agencies and entities. Each committee should plan to finish their business by 4 p.m Eastern Time of their third and final meeting day.

Tse recommended that committees have “plan Bs” in case persons the committee members want to hear from aren’t available at the expected time. Flexible preparedness was a refrain during the remaining staff presentations Tuesday and Wednesday, beginning with GA Script Manager Mathew Eardley giving an overview of drafting plenary scripts. Each committee uses its script to bring its report to the full Assembly, during which the body will deliberate and vote on any committee recommendations for items of business.

Eardley said it is easy to feel overwhelmed by the script information and other aspects of Leader Briefing training — he joked that he feels a little overwhelmed himself. For that reason he is scheduling a hands-on training and Q&A about script preparation on June 14.

After Kerry Rice, Deputy Stated Clerk, shared more information about the committee rooms set-up, Ken Hockenberry, who is managing committee parliamentarians along with Rebecca Blair, encouraged moderators and vice-moderators to coordinate schedules with parliamentarians, who like trackers will work with multiple committees.

Late Tuesday afternoon and early Wednesday afternoon committee leaders applied their training to agenda preparation, with each committee being asked to submit its agenda via PC-Biz before 1p.m.

The Rev. Dr. Diane Moffett, PMA president and executive director, offered a prayer and welcome, giving special thanks to the work of OGA colleagues and others in the national church involved in creating “safe spaces for participants in the Assembly.” She spoke about the PC(USA)'s Matthew 25 invitation being a response to a directive from the 222nd General Assembly in 2016 and shared information about the nine-member PMA leadership cabinet involved with GA 225.

The Rev. Jihyun Oh, Director of Mid Council Ministries in OGA, led a last presentation on choice points and equity primes, building on modules about implicit bias from the Kirwan Institute at The Ohio State University leaders had completed earlier. During Oh’s presentation leaders shared their reactions to the trainings and ideas for confronting implicit bias in their committees.

Choice points and equity primes can help with that, Oh explained. “We are using these tools because we want to be in concert with our values.”

The Committee on the Office of the General Assembly (COGA) has led the effort to use equity primes and choice points at GA 225 as a way to ensure an intentional approach to equity and inclusion. This is the first time equity primes will be used by Assembly committees.

Choice points are places when “we can make decisions that impact equity and inclusion over time,” Oh said. “We can either take the same old actions and end up with the same outcomes or make choices to create equity, belonging and kin-dom.”

Equity Prime cards will be provided to committee leaders and members so that during committee deliberations the cards’ questions and prompts can inform discernment and decision-making. The equity prime tools will also be available digitally through myGA.

Oh returned the leaders to the case studies Dykers-Koenig shared Tuesday, encouraging leaders to apply their discussion of equity primes and choice points to those scenarios.

COGA is currently using the equity primes, Oh said, and helping to hone the resources as a part of GA 225’s overall innovations toolbox. Several moderators said they will road-test the equity primes in the weeks before the Assembly with their congregations or mid councils.

Leaders logged into PC-Biz and cast unanimous votes approving revisions to the Assembly docket and adopting the referrals to Assembly committees, including amendments that Dykers-Koenig summarized. Detailed information on both votes can be found in PC-Biz: