First 'Along the Road' episodes available

'Nourish' and 'Encounter' explore church calls and how to follow them

The “Along the Road” podcast team has released its first two episodes, which can be downloaded from podcasts services or accessed directly from the Mid Council Ministries section of pcusa.org.

The opening episodes explore overlapping ground with two specific audiences in mind: ruling elders and deacons for “Nourish” and, for “Encounter,” mid council and other church leaders.

That overlapping ground is call — how one receives a call to Christian service, and how calls are lived out at churches and across lifetimes.

Martha Miller, Manager of Ministry Education and Support in the Office of the General Assembly (OGA), hosts the shorter-format Nourish podcasts as well as Leader Formation webinars. In the first Nourish episode she speaks about how calls are not just for pastors and other church employees. Ruling elders and deacons are also called to their service.

Quoting Lee Hinson-Hasty in “Coming Alive in Christ,” Miller explains how the conditions for receiving a call go back to baptism and how calls flourish through a life of discipleship. For ruling elders and deacons, calls relate to particular roles of service within their church.

“Where do we hear God’s call?” Miller asks. After joking about an alternative reality where discerning a call would be as easy as searching the internet (“Google: Is that You, God?”), she says, “We pay attention to signs … Community is also a part of that call.”

Encounter: Analyzing what “Call” and “Ministry” means for the Presbyterian Church (57 mins)

In the first Encounter episode, host Manuel Silva-Esterrich (Manager for Call Process in OGA) talks with Assistant Stated Clerks of the General Assembly Tim Cargal and valerie izumi about “The Call” and “The Ministry,” exploring theological aspects of those terms and the guests’ experiences as church workers.

Echoing Miller in Nourish, Cargal points to the baptismal foundation of call (“When people ask me if they have a call to ministry, I say, ‘Are you baptized?’”) and the shaping role of community.

Cargal, who works in Preparation for Ministry, says community can be a helpful check on an individual’s narrow perspective in discerning and fulfilling a call. Families are communities, as are church memberships and groups inside and outside churches.

valerie izumi, who works with General Assembly nominations, speaks about the importance of identifying ministry candidates who have the gift of discernment (“Often the talents and gifts I see in myself are less useful than the gifts others have identified in me.”) She encourages groups not to rush the call process, so there is time for deep discernment and reflection by all involved.

Silva-Esterrich mentions an increasingly important part of ministry work in 2022: ministries helping each other inside a worshiping community, such as a church’s youth ministry helping its music ministry or older adult ministry. 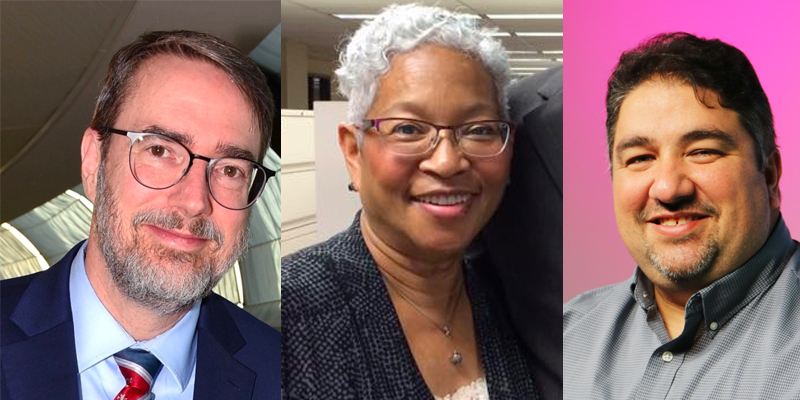 Cargal points out that calls can be lifelong or last a few years. “Some stages of ministry come to completion, others do not.” Silva-Esterrich so likes Cargal’s recommendation that persons working in ministry should develop “a rhythm of discernment” early in their vocations that he jokes, “Make that into a bumper sticker!”

izumi’s own experiences in ministry included an early ministry call that propelled her along a career path focusing on diversity and justice. She urges listeners to give young people their own chances to experience opportunities they might not know are available to them and later shares information about calls listed on the General Assembly Nominations Portal.

Cargal says that discerning a call to ministry often begins with a Presbyterian talking with a pastor or church session. “From there you will identify gifts you have and ways to strengthen those gifts.”

“If you feel called, don’t keep it to yourself,” Silva-Esterrich says in closing. “Seek, speak, knock. It is a bumpy road, but we will see each other along it.”

The Along the Road podcast team plans to release a new episode each week.

The next Nourish episode will feature an interview with Jihyun Oh, Director of Mid Council Ministries in the Office of the General Assembly, about the process of ecclesial formation for ruling elders and deacons. Miller said that later Nourish episodes will focus on practicing mindfulness (with Michelle Thomas-Bush of Myers Park Presbyterian Church in Charlotte) and reflecting on Hebrews 11 — what Miller described as “living out our faith as the assurance of things hoped for, the conviction of things not seen” (with Chip Hardwick, Executive of the Synod on the Covenant.)

The next Encounter episode will feature a conversation with Kate Trigger-Duffert, Manager of General Assembly Business and Per Capita, and David Gambrell, Associate for Worship in the Office of Theology and Worship in the Presbyterian Mission Agency. The guests will discuss how worship is an important form of leadership formation — "worship as a concept, as an event of cultic importance in our foundations and as a disciplinary practice in each of us,” Silva-Esterrich said.