Presbytery of Charlotte will be first PC(USA) sponsor of event

Anyone attending a PC(USA) national gathering in the last two decades might have noticed T-shirts with “got privilege?” on the front. Presbyterians and church workers get those at the White Privilege Conference (WPC), which this year is being hosted at the Charlotte Convention Center and sponsored by the Presbytery of Charlotte.

Like the shirts, the conference asks questions and starts conversations. This year’s gathering, a hybrid in-person and virtual meeting from March 9-12, brings together participants from a wide array of vocations and backgrounds, including secular and faith groups looking to embrace The Privilege Institute’s call for “understanding, respecting and connecting … on issues of privilege, power and leadership.”

This year’s theme — "Wade In the Water: White Privilege, Religion & Reciprocity ”— brings special scrutiny to the role of Protestant churches in antiracism work.

[You can still register for the event. PC(USA) attendees may enter the discount code PCUSAWPC23 and select the “K-12, non-profit” rate at the registration page to receive a 20% discount.]

The Rev. Dr. Jan Edmiston, Co-Moderator of the 223rd General Assembly (2018) and Executive Presbyter of the Presbytery of Charlotte, said that her first White Privilege Conference “literally changed my life.”

Edmiston, who led the Assembly as co-moderator alongside the Rev. Denise Anderson, advocated for this year’s conference to be hosted in Charlotte.

She said the Presbytery of Charlotte is a good fit for a conference about antiracism and justice work, noting the mid council’s many African American members and historic links to all Black mid councils, including Catawba Presbytery. Partnerships between predominantly white and Black Presbyterian churches in Charlotte have formed or strengthened during COVID, showing that cross-cultural kinship is a sustained priority.

Donna Fair, who is part of the Presbytery of Charlotte’s Ministry Resource Committee and has attended previous WPCs, said this year’s meeting “touches so many parts of the community and builds networks throughout the city.”

She said the presbytery had helped with hosting duties though an education committee that connected with local universities and the local school system, a sponsorship committee that solicited corporate donors, and a cultural connections and community engagement committee that “made sure this conference aligns with the community’s values.”

The conference’s thematic focus on religion this year shows the importance of faith groups to the movement for greater equity and opportunity.

“A part of our call is to respond to injustice,” Fair said, “and racism is an injustice — whether you live in in an area with a lot of African Americans or not.

“If we are going to talk about issues of privilege and white supremacy, we have to start with the core principle of God created us all the same, so why are we not all receiving the same?

“From my perspective as a Black person, we go in 50-year cycles in this country,” regarding movements for civil and human rights. “We’re back in one right now.”

The conference was founded 23 years ago by Dr. Eddie Moore, and for most of its history educators from high schools and universities have been most of the attendees. In 2016, the conference was held in Louisville, with the University of Louisville primary host. 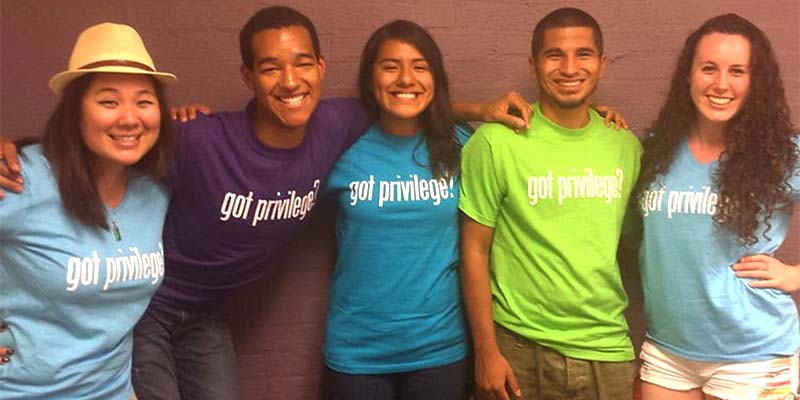 “got privilege?” T-shirts. Photo courtesy of The Privilege Institute.

“got privilege?” T-shirts. Photo courtesy of The Privilege Institute.

National church staff and mid council leaders have attended the WPC for more than a decade. Synod executives have been among the most frequent repeat attendees from the PC(USA).

The conferences, which in the past have included 2,000 attendees and over 100 workshops, feature spaces for conversations across and inside cultural groups. Most years, more than half the attendees are white.

The Rev. Steve Miller, a Baptist pastor who graduated from Austin Presbyterian Theological Seminary, connected the conference’s mix of secular and religious participants with the work he does through the United States Christian Leadership Organization (US-CLO), a group he founded: leading an oral history project that documents racism experienced by African Americans and Latinos in Texas and helping congregations effect civil rights changes through community engagement, including calls for legislative change.

“I come to all my work from a religious background,” Miller said. His guiding ethos is helping people inside outside church “work toward their own liberty.”

Miller, who prefers the term “loved ones with color or without color” to “Black or white,” remembered his first WPC in 2017, where he led a session.

“I was scared, even terrified,” he said. “Human rights workers are extremely smart, but we see a lot of negative and ugly things that can make us hard.”

He worried the audience members “were going to come after me … But I came at them with love and they were able to let down their guard.” His talk urged working on human rights issues “from a heart space instead of a headspace.”

“Nobody cares how much you know until they know how much you care,” Miller said. “Facts and figures can support that but you need to start with love.”

Each White Privilege Conference creates opportunities for heartfelt discussions and self-reflection. In the past, some PC(USA) church workers have provided pastoral care for Presbyterians processing their session experiences.

Like Edmiston and Fair, Miller appreciates the conference’s focus on action.

After the session Miller led in 2017, some pastors without color asked him, “What do we do next? Do we have a book study with my congregation?”

“I said, ‘No, don’t do that,'" Miller remembered. “You have to move to a place of action working alongside African American and Hispanic brothers and sisters, actually doing the work, not just studying it.”

This year’s conference will have a hybrid format, with recordings available to registrants. Edmiston said attending the conference in person is the best way to experience it for those who can do so.

Charlotte is easing some COVID-19 protocols, but the conference’s vaccine and masking mandates remain in place.

Learn more about WPC2022 at www.theprivilegeinstitute.com/wpc23charlotte

PC(USA) attendees can use the discount code PCUSAWPC23, entered when prompted at the registration page and select the “K-12, non-profit” rate.