Employing the theme ‘unbound we thrive,’ the pair pledges to spend the next two years as ambassadors of hope 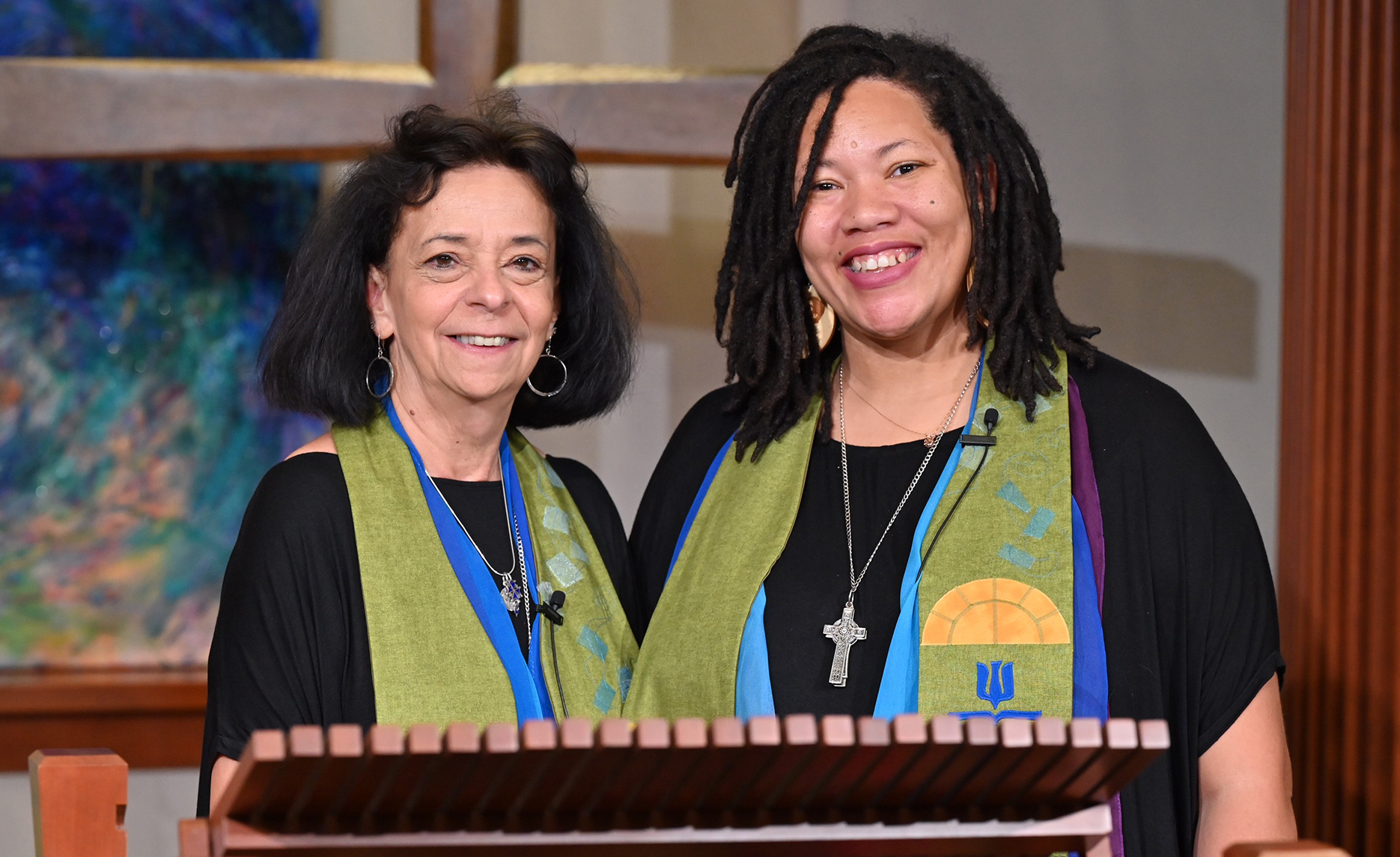 By a tally of 203-151 Saturday night, commissioners to the 225th General Assembly elected the Rev. Ruth Santana-Grace and the Rev. Shavon Starling-Louis as Co-Moderators. Together they’ll serve a two-year term, the fourth straight team of Co-Moderators to win election.

The two were immediately installed during a service led by their predecessors, Ruling Elder Elona Street-Stewart and the Rev. Gregory Bentley, as well as the Rev. Dr. J. Herbert Nelson, II, Stated Clerk of the General Assembly of the Presbyterian Church (U.S.A.)

Santana-Grace, 69, is executive presbyter of the Presbytery of Philadelphia. Starling-Louis, 39, is pastor of Memorial Presbyterian Church in Charlotte, North Carolina.

They defeated another pair standing for Co-Moderators, the Rev. Marilyn McKelvey Tucker-Marek, minister at Forsyth Presbyterian Church in Georgia and pastor of UKirk campus ministry at Mercer University in Macon, Georgia, and Josephina Ahumada, a commissioned ruling elder in the Presbytery de Cristo who serves as pulpit supply at Papago United Presbyterian Church on the Tohono O’odham Reservation in Arizona.

During an hour of brief speeches and a question-and-answer session held in the packed conference center at the Presbyterian Center in Louisville, Kentucky, Santana-Grace said if elected, the pair will be “ambassadors of that hope that continues to break through the darkness, which will not overcome it.”

Their theme since agreeing earlier this spring to stand together has been “unbound we thrive,” Starling-Louis said, promising as Co-Moderators they will “celebrate the places that thrive and places where we are called to do the work, places where we come together around the theology of the table.”

Family members surrounded the two Co-Moderators during the installation service following their election, praying for and supporting their loved ones joyfully. The pair were given moderators’ crosses and stoles to equip them for the work ahead.

“As you travel across the church and represent the Presbyterian Church (U.S.A.) … in a time in which we’ve had to alter the work of faith … you’re called in this moment to walk by faith and not by sight,” Nelson told them, “that as you walk by faith, others will gain in faith by what they see.”

“Blessings,” Nelson said as he placed stoles on each of the Co-Moderators, “for the work that has been done this night. Let the church say, ‘Amen.’” And it did, emphatically.

“Welcome to the guild,” Bentley said.

The Rev. Jim Murphy and Perry Chang of host Mid-Kentucky Presbytery gifted the Co-Moderators with Louisville Slugger bats, which Murphy encouraged them to use “as they step up to the plate” over the next two years.

Santana-Grace’s voice has been affected by a diagnosis of vocal dysphonia, “which has not silenced my voice, but it did take away my ability to sing,” she said during a press conference following their installation.

“It’s been beautiful watching our two communities come alongside this call,” Starling-Louis said. “On paper, it shouldn’t have worked.”

“To God be the glory,” she said, adding the two are “grateful for the love and support and trust of the commissioners.”

Starling-Louis said the task immediately ahead is to “moderate the 225th General Assembly as faithfully and lovingly as we can, and to listen to what God is up to and to make sure voices are heard fairly. Getting through General Assembly will dominate the next few weeks.”

“Our platform will be a framing,” Santana-Grace said. “That’s as far as we’ve gotten,” she added with a grin. “Our call was to stand, and now our call has been extended.”

Asked about what concerns they are hearing from churches, Starling-Louis said “genuinely, it’s a sense of deep grief. We’re most aware there’s fatigue that happens,” especially more than two years into the pandemic.

“The exhaustion is real and palpable, but there is hope we’ll get through,” Santana-Grace said. “What that will look like, no one is really certain.” While some churches still offer excuses such as “we never did it that way before,” in fact, “during the pandemic we did do it differently,” she said.

Asked to elaborate on their “unbound we thrive” theme, Starling-Louis said that as “resurrection people, we are unbound by thinking this is the end of the story. We become free to say, ‘God, what would you have us do with what you have given us? What are you calling us to create and co-create? There’s a buzz of energy that comes forth, an invitation in all churches to shift from ‘we don’t have’ or ‘we can’t’ to ‘what is the next faithful response that says, we are available?’ There is thriving, joy and celebration that happens authentically from that space.”

And don’t forget, Santana-Grace said: at Jesus’ resurrection, only the linens — which had bound him in death — were left behind.

“I love the Pentecost story,” she said. “That’s where we were confused and uncertain, and then the Spirit breaks in, and [the disciples] are able to meet people where they are. That’s a powerful reminder we are Reformation people, and we need to lean into that identity.”

Along their journey standing together for the office they now hold, “friends became family, and family has made room” for their work so far, Starling-Louis said. “Being a minister is weird, but at the same time it’s holy, because God provides a way forward consistently.”

“We are deeply relational people,” Santana-Grace said. “This is who we are, and we trust God will continue to allow us to use those gifts.”

The new Co-Moderators will be the guests of GA reporter Fred Tangeman at 10 a.m. Eastern Time Sunday on “GA Live.” Watch them here.