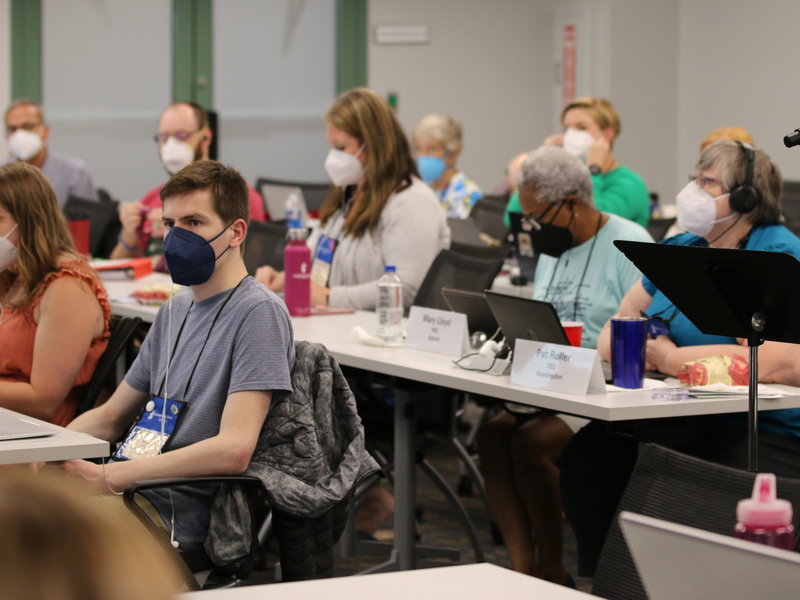 A meeting of the Committee on Mid Councils held on June 20, 2022 at the Presbyterian Center in Louisville, Kentucky. (Photo by Randy Hobson)

A meeting of the Committee on Mid Councils held on June 20, 2022 at the Presbyterian Center in Louisville, Kentucky. (Photo by Randy Hobson)

The Committee on Mid Councils at the 225th General Assembly of the Presbyterian Church (U.S.A.) spent the majority of its first day considering a trio of overtures that spoke directly to an issue raised at Sunday’s Juneteenth Service.

Toward the end of his sermon, Rev. Dr. J. Herbert Nelson, II, Stated Clerk of the General Assembly of the Presbyterian Church (U.S.A.), addressed the situation of non-chartered fellowships – often based in communities that have been marginalized – that do not enjoy full representation in mid councils or the national church. He called on the General Assembly to remove barriers to inclusion.

The Rev. Carmen Rosario, of the Racial Equity Advocacy Committee (REAC), cited Nelson’s sermon as she concluded her comments supporting REAC’s overture on chartering immigrant fellowships, and the Rev. Lina Thompson, a member of the Committee on Mid Councils, evoked the sermon when she endorsed the establishment of a task force regarding ordination to ministry for ruling elders.

The committee acted on two of the three related overtures on Monday afternoon.

By a vote of 29-2, the committee said the action on MC-07 answered MC-01, “On Recognizing Non-Chartered Fellowships as Churches to Promote Representation and Participation on National and Regional Committees and Councils,” an overture from Nevada Presbytery.

Both advance to the full assembly for consideration.

The third item, MC-10, “On Establishing a Task Force to Explore the Theology and Practice of Ordination to Ordered Ministry for Ruling Elders,” prompted a series of amendments, mostly pertaining to the makeup of the 11-person task force.

The most contentious point was adding language calling for the task force to include a representative from a “small membership, rural congregation.” Two motions failed by votes of 14-17 and 13-16, and a motion to reconsider also failed. Eventually, the committee voted to postpone further action and make it the first order of business on Tuesday.

In additional business on Monday, the committee:

Tuesday’s agenda includes business items related to benefits for ministers and mid council staff, among other issues. The committee meets through Wednesday.