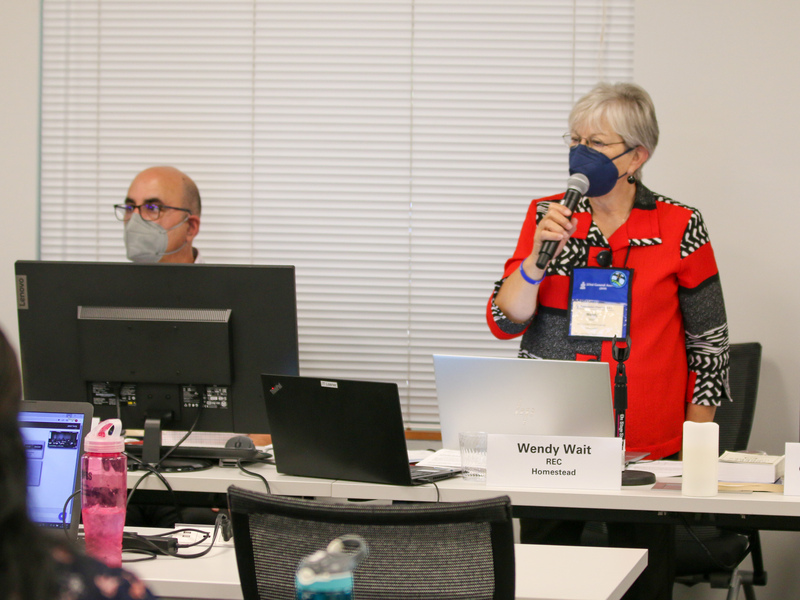 Most of the Mid Councils Committee’s second day at the 225th General Assembly of the Presbyterian Church (U.S.A.) was devoted to employee benefits, including a robust discussion with the Rev. Dr. Frank Spencer, President of the Board of Pensions.

The catalyst for the discussion was MC-02, “On Benefit Equity Among Mid Council Staff,” an overture brought by John Calvin Presbytery in Kansas and Missouri. The Rev. Chris Miller, the overture advocate from the presbytery, introduced the overture telling the story of calling a ruling elder as co-presbyter. The presbytery was shocked to learn the difference in the cost of benefits for the ruling elder selecting from the Board of Pensions’ (BOP) menu plan and a teaching elder with a flat-rate Pastor’s Participation plan — 88% of the ruling elder’s effective salary vs. 36% of the teaching elder’s salary.

Miller said that the BOP said it was an unusual circumstance due to factors such as the area and the ruling elder’s specific circumstances. But, he added, talking to other presbyteries, Calvin found out it was not alone, and 10 presbyteries concurred with the call for ruling elders hired into mid council executive staff positions to be offered the Pastor’s Participation Plan.

That was the case prior to 2017 when the Board of Pensions offered the menu plan, which Spencer said brought more than 4,000 new employees from the church level on up into the church’s benefits plans. Spencer said he agreed with the spirit of the overture, but not its wording, contending it would create a special class of employee rather than promote parity and potentially increase costs for everyone.

“We’re fully in support of the issue that’s being placed on the table,” Spencer said. “The original language was problematic.”

Several committee members spoke about being very happy with the benefits they receive from the Board of Pensions.

The discussion prompted a visit to the committee room by the Rev. Dr. J. Herbert Nelson, II, Stated Clerk of the General Assembly of the Presbyterian Church (U.S.A.), who said this was an ecclesial issue, not financial.

In a deliberation that stretched across lunchtime, the committee ultimately approved the overture by a vote of 29-4, with amended language encouraging the Board of Pensions to “prayerfully consider allowing” the change for ruling elders and adding a comment stating “further parity should also be encouraged to all who are eligible for enrollment.”

There was a similar discussion around MC-03, “On Establishing the Authority of Presbyteries to Define Severance Plans for Installed Ministers,” from Beaver-Butler Presbytery in Pennsylvania. The committee initially disapproved the overture 17-14, but later decided to revisit it. Reconsideration of the overture is on the committee’s agenda for Wednesday.

The committee started its second day with a fairly quick approval of an overture carried over from Monday. MC-10 from San Fernando Presbytery calls to establish a “Task Force to Explore the Theology and Practice of Ordination to Ordered Ministry for Ruling Elders,” proposed with the intention of giving immigrant fellowships and New Worshipping Communities a more active role in the life of the church.

Discussions Monday largely centered on the makeup of the proposed 11-person task force. The overture was approved with amendments to address concerns from the Advisory Committee on the Constitution by a vote of 30-2.

On Tuesday, the committee also:

In addition to other business Monday, the Committee approved MC-08, sponsored by Palo Duro Presbytery, “On Clarifying the Intent of G-2.1001 Regarding Use of Commissioned Pastors,” with an amendment suggested by the Advisory Committee on the Constitution.

The final day of the Mid-Council Committee is Wednesday, starting at 9 a.m. Eastern Time. You can watch it on livestream here.