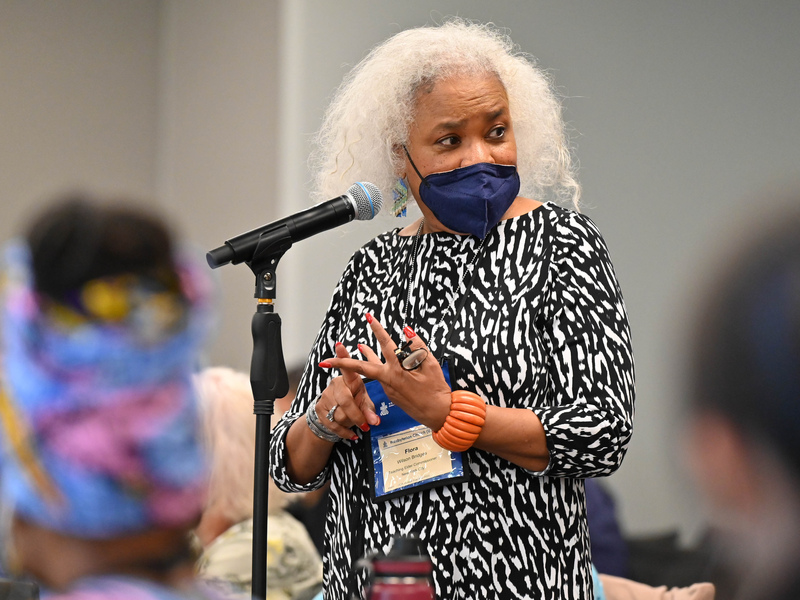 Flora Wilson Bridges, a Teaching Elder Commissioner, explained some terminology during the first meeting of the Gender and Racial Justice Committee on June 23, 2022. (Photo by Rich Copley)

Flora Wilson Bridges, a Teaching Elder Commissioner, explained some terminology during the first meeting of the Gender and Racial Justice Committee on June 23, 2022. (Photo by Rich Copley)

On the first day of its work, the Race and Gender Justice Committee took a big step toward addressing an historical injustice against a Native Alaskan congregation in Juneau, Alaska, approving an overture instructing reparation and atonement for the racist closing of Memorial Presbyterian Church in 1963.

The committee also approved three other main motions, speaking to (1) the murder and disappearance of Indigenous women, girls and two spirit people (MMIWG2S), (2) the murder of transwomen of color and (3) the urgent need for improved reproductive care for Black mothers and children.

A resolution addressing the lack of installed pastoral leadership in people of color congregations was dealt with in parts and should be completed Friday.

Read the action summary of the Race and Gender Justice Committee here.

The committee’s work began with “RGJ-03: A Resolution on Reproductive Justice: Black Maternal/Birthing People and Infant Mortality.” After hearing from resource staff, the resolution’s sponsors, the Advocacy Committee for Women's Concerns, the Racial Equity Advocacy Committee and commissioners and advisory delegates, the original resolution passed with the addition of only a comment.

The resolution sought to “bring to awareness the disproportionately large number of Black women/birthing people and Black infants who have died due to racial disparities in their healthcare.”

One commissioner told the GA News that RGJ-03 was a good item to start with, there being near unanimity in the room on the proposed action.

Getting off to a good start and giving commissioners and advisory delegates a chance to wade into the digital waters of PC-Biz and meeting procedures helped establish momentum for the rest of the day, even if the swimming was not always swift. Around the room large sheets of paper provided Wi-Fi passwords, lists of acronyms that would come up repeatedly, equity prime reminders and technology advice. Votes were displayed on personal devices and on huge projector screens at the front of the room.

Willye Bryan, moderator, and Lori Yamauchi, vice-moderator, led the meeting from behind the front table, flanked by Committee Assistant Annie Hawkins, Committee Parliamentarian Brian Ellison and Transcriptionist/Recorder Clara Nunez. Jihyun Oh of the Office on the General Assembly served as Resource Coordinator, introducing the many resource and overture advocate speakers who stepped up to the microphone.

In the hour before and after lunch, the committee discussed the six recommendations in “RGJ-07: A Resolution Addressing the Lack of Installed Pastoral Leadership in People of Color Congregations in the PC(USA),” a resolution brought by REAC. Recommendation 2 was assigned to a subcommittee, who will discuss it and report back to the full committee tomorrow morning.

Resource personnel and overture supporters including E. Byron Elam from the General Assembly Committee of Representation spoke in support of the resolution’s Recommendation 1 to “direct the Office of the Stated Clerk to implement PC(USA) policies establishing minimum compensation standards (Book of Order, G-2.0804 Terms of Call) for pastoral calls,” with Elam calling the financial hardships faced by congregations of color a crisis.

“We encourage OGA to do everything it can to overcome obstacles it spoke to earlier” he said, about the inability of the Assembly to direct presbyteries to act in a specific way. Eliana Maxim of the Committee on the Office of the General Assembly had spoken to that concern earlier regarding Recommendation 1.

A commissioner’s amendment moved agency of the proposed work from the Office of the Stated Clerk to presbyteries and changed the verb “direct” to a non-binding “encourage.” Other changes followed, including adding language specifying support to congregations of color with a minimum of three years of salary for a pastor in addition to benefits.

One commissioner voiced concern about who would pay for such support. Another responded that claims of “we have no money for this” can often be attributed to the history of racial inequality the committee is responding to; resources have not been shared equally with Black and Native congregations.

Additional changes encouraging presbyteries to “assist, as able” congregations of color with financial support were made to the amended Recommendation (still number 1), which passed unanimously. The committee voted with only one no vote, approving the final amendment for Recommendation 1.

Recommendations 3-6, which the moderator recommended be handled “as a whole,” was then discussed.

A commissioner asked for language adding “all other racial ethnic congregations” to those due to receive reparations according to the resolution, beyond just “African American congregations.” Another, arguing against that change, pointing out the unique connection between reparations in this context with the ancestors of enslaved people. The motion to add “all other racial ethnic congregations” to Recommendation 3 was defeated 21 to 9.

Now it was time for “RGJ-09: Directing the Office of the General Assembly to Issue Apologies and Reparations for the Racist Closure of the Memorial Presbyterian Church, Juneau, Alaska,” an overture sponsored by the Presbytery of Northwest Coast.

The committee heard from Maxine Richert, a member of the Northern Lights Church that flourished only after the Memorial Presbyterian Church — a majority Tlingit congregation — was closed by presbytery in the 1960s. Richert, who is Tlingit and grew up attending services at Memorial, spoke about that closure and the connected removal of its Native pastor, the Rev. Walter Soboleff. The overture instructs an apology to Soboleff and his family.

Soboleff’s family members also spoke on video, as did a former pastor of Northern Light, who pointed out that white members of the church have a lot at stake through this overture, which creates an opportunity for repentance.

Other overture advocates spoke about Soboleff’s lasting pain at the closure of Memorial, his stature in the Native Alaskan community and the “culturally appropriate” steps of repair found in the overture.

Dr. Corey Schlosser-Hall, now the deputy executive director of the Presbyterian Mission Agency, who had worked at the sponsor presbytery and with the Northern Light church and greater Juneau community on the overture, told the GA News that Northern Light’s own related resolution is “comprehensive, imaginative, a demonstration of real repentance and a model of options for others considering reparative action.”

The Rev. Irv Porter, also of PMA, talked to the committee on Zoom about how other Native congregations have suffered from similar assimilationist actions by the church.

“It’s the very least that the PC(USA) can do,” Porter said.

There was a move by commissioners to immediately approve the overture, with two voicing strong support for the motion, including all the work the presbytery and congregation had put into preparing it.

One commissioner asked for an explanation of the financial implications of the overture.

Barry Creech, another PMA deputy executive director, discussed the costs involved in the $300,000 outlay called for in the overture, including $200,000 to be donated by PMA in the name of Memorial Presbyterian Church to the Presbyterian Foundation Native American Church Property Fund.

With that it was time to vote, with 30 yeses approving the unaltered overture and 1 no. 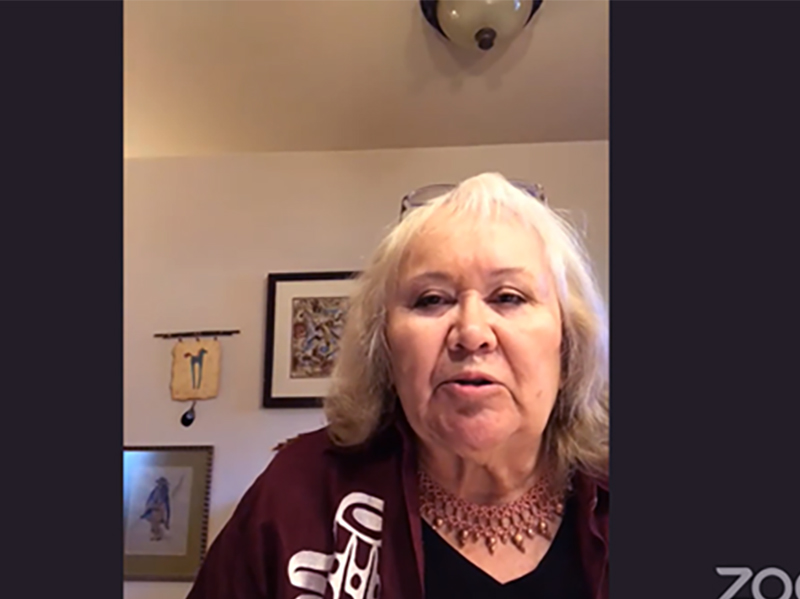 Next up was “RGJ-02: A Resolution on Missing and Murdered Indigenous Women, Girls, and Two Spirit People (MMIWG2S).” The committee heard from resource persons, including Madison McKinney from ACWC, which along with REAC sponsored the resolution that had no financial implications.

McKinney said the resolution refers to an “alarming epidemic” in Indigenous communities around the country, and the lack of reporting on the number of missing and murdered MMIWG2S persons.

The resolution calls on the PC(USA) to use its resources, expressly through the Office of Public Witness and Presbyterian Ministry at the United Nations, to do more to raise awareness about the missing and murdered MMIWG2S individuals.

McKinney spoke about her own pain at the recent murder of someone close to her from the MMIWG2S community. “Here I am not just as a member of this church, but as an Indigenous woman asking you to do what you can do. Help us find a way for our Indigenous neighbors.”

A committee member brought forth an amendment “to hold the police and FBI accountable” for the lack of work done on those cases. “As a church and citizens, we can put a lot more pressure on law enforcement agencies to do more,” he said.

Language to that effect, and wording advocating for reauthorization of the federal Violence Against Women Act, was added to a substitute motion that later became the approved main motion.

The last item of business for the day was “RGJ-04: A Resolution for Transwomen of Color.”

As with some previous items of business, the resolution—sponsored by ACWC—had been referred to GA225 from GA224, with only small financial implications.

As a part of the advocacy presentations, the names of transwomen of color murdered from 2020 to 2021 were read to the committee, and a fuller list provided on the item of business page. 2020-21 was the deadliest year on record for Trans people, one presenter said.

The committee voted on the resolution without amendment, approving it 30 to 3.

“We have come to the end of our day,” announced Moderator Bryan at 4:50pm Eastern Time. She asked the newly empaneled members of the subcommittee to stay after to begin discussing their homework due before the committee the next day.

The committee closed with prayer. “We’ve been through an extremely busy day,” said the first worship speaker. “And there is a lot more to do.”