Home News Committee on Addressing Violence in the U.S.A. wraps up its business

Committee on Addressing Violence in the U.S.A. wraps up its business

Two overtures pass with only slight amendments to original text 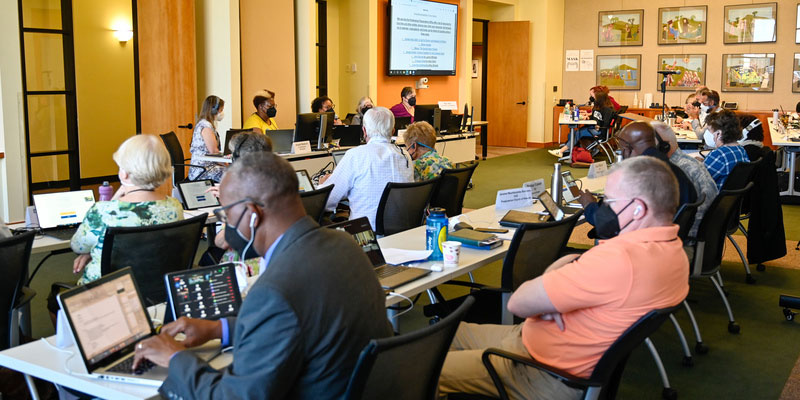 The Addressing Violence in the U.S.A. Committee meets on June 23, 2022, at the 225th General Assembly of the Presbyterian Church (U.S.A.) in Louisville, Kentucky. (Photo by Rich Copley)

The Addressing Violence in the U.S.A. Committee meets on June 23, 2022, at the 225th General Assembly of the Presbyterian Church (U.S.A.) in Louisville, Kentucky. (Photo by Rich Copley)

The Committee on Addressing Violence in the U.S.A. concluded its business Saturday after considering two overtures, [VIOL-08] On Living in Healthy Relationships Free of Violence and Coercion and [VIOL-09] On Commending and Recommending the Guns to Garden Movement.

VIOL-09, sponsored by Santa Fe Presbytery, recommended PC(USA) churches and presbyteries learn about the Guns to Gardens national buyback cooperative and consider that it become a ministry to which they are called. It also urges the Presbyterian Peacemaking Program to add information about Guns to Gardens and resources about gun violence prevention to its website.

Harry Eberts, a teaching elder and overture advocate from Santa Fe Presbytery, noted, in one of four prerecorded videos asking for approval, that the Guns to Gardens movement comes from Isaiah’s mandate to beat swords into plowshares.

“We invite people to bring unwanted guns out of their homes, guns they don’t want anymore or are fearful of, and we turn them into garden tools,” said Eberts.

The motion to approve VIOL-09 and accept the recommendation as written passed in a near unanimous vote.

In considering VIOL-08, the committee agreed in spirit with the resolution as written, which was presented via video by Charissa Clark Howe, teaching elder from Pittsburgh Presbytery, who coauthored the overture. VIOL-08 calls for us to live in healthy relationships free of violence and coercion.

At the end of initial small group discussions of VIOL-08, commissioner Richard Poole, teaching elder from San Fernando Presbytery, summed up the thinking of many committee members by requesting that “more teeth” be added to the resolution.

Stephen Kliewer, teaching elder commissioner from Eastern Oregon Presbytery, shared similar concerns. “I’m very much for this. I am trying to figure out how this plays out and becomes something that has impact,” he said. “I don’t want us to rush and accept if we can make it stronger, possibly connecting more effectively with domestic violence programs. I would love to see this pass, but I would love to see it strengthened.”

The committee closed with worship after Moderator Erika Rembert Smith, teaching elder from Central Florida Presbytery, thanked the committee members for conducting demanding work amid an atmosphere of grace over the past three days. The business of the Committee on Addressing Violence in the U.S.A. now moves forward to the assembly.