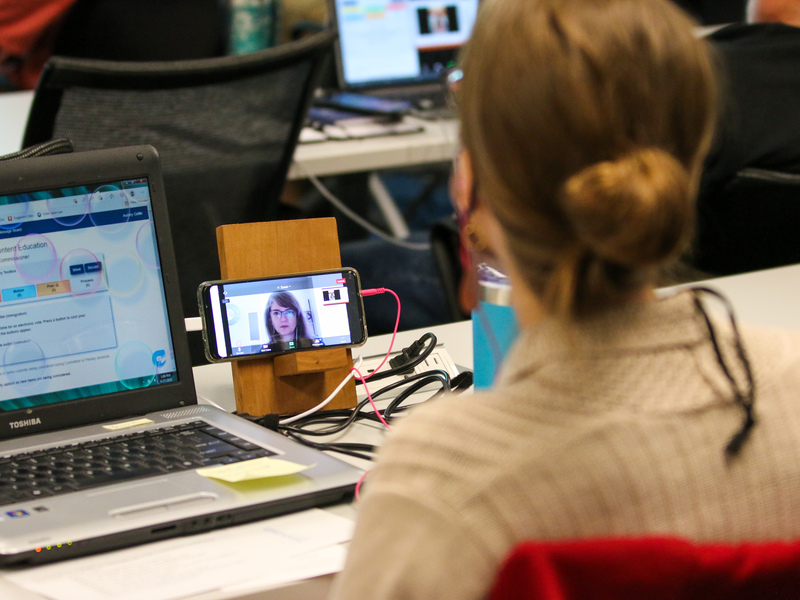 Audrey Cottle of the Presbytery of Redstone listens to a presentation by Resource Coordinator Teresa Waggener of the OGA Office of Immigration Issues via Zoom at the Immigration Committee meeting on June 27, 2022 at the 225th General Assembly of the Presbyterian Church (U.S.A.) in Louisville, Kentucky. (Photo by Randy Hobson)

Audrey Cottle of the Presbytery of Redstone listens to a presentation by Resource Coordinator Teresa Waggener of the OGA Office of Immigration Issues via Zoom at the Immigration Committee meeting on June 27, 2022 at the 225th General Assembly of the Presbyterian Church (U.S.A.) in Louisville, Kentucky. (Photo by Randy Hobson)

The Immigration Committee of the 225th General Assembly approved an item of business Monday to make it easier for immigrants and people seeking asylum to get legal representation.

The amended resolution, brought forth by the Racial Equity Advocacy Committee (REAC), would result in Presbyterian Disaster Assistance (PDA) urging Presbyterian attorneys, translators, interpreters and paralegals to get trained in asylum law to expand the availability of legal representation, to work to broaden the accessibility of training resources for that purpose, and to encourage the work of existing pro bono immigration support networks.

The IMM-03 resolution, which was approved 38-0, also calls for the establishment of a network of attorneys so that a list of resources will exist throughout the country to alleviate the suffering of immigrants and people seeking asylum.

The resolution’s approval followed a presentation by REAC’s Bisi Shofu, who said a trip to El Paso, Texas, made it clear that legal representation was sorely needed to keep people from languishing in detention centers.

“Asylum seekers and immigrants fleeing devastation and life-threatening attacks against them are denied access to the courts because they have no means to afford a lawyer and the willing few pro bono lawyers are taxed to the limit,” REAC notes in the resolution’s rationale. “Therefore, these immigrants and asylum seekers are in limbo at the border or in prisons in the U.S.”

The Presbyterian Church (U.S.A.) should respond because “we are a Matthew 25 church,” Shofu testified at Monday’s meeting. “We are supposed to care for one another, and this is something that we need to take action on, so that people can get justice.”

Shofu noted that people often migrate because they’ve been driven from their home countries by factors that are out of their control, such as environmental issues or “companies going to their countries and causing destruction.”

“People aren’t coming here for the fun of it,” she said. “They are in dire need because of climate change and other issues, and we should be humane and stop putting roadblocks in front of them, so that they can have access to justice.”

The original version of REAC’s resolution called for the establishment of a network of pro-bono lawyers through PDA, but at least one committee member, Carson Brown, a Young Adult Advisory Delegate from Peace River Presbytery, felt that language was “too broad.” However, “the language of establishing a network of attorneys so that a list of resources exists is specific enough for me.”

REAC Chair the Rev. Michelle Hwang attended the meeting and explained that her committee’s thinking about the resolution had evolved.

“Our initial resolution, brought to you two years ago, was in light of our trip to El Paso, and so we wanted to establish a network of lawyers,” she said. “But having said that, during this time we found out that PMA is doing this work, and … there is a nonprofit organization called the Immigration Advocates Network, and so what we would like for you to do is to encourage PMA to amplify that service and encourage Presbyterians who are retired or who want to do pro bono work to get in touch with this network and beef up this network.”

During an earlier question-and-answer session, PDA’s Susan Krehbiel spoke of another way life could be made easier for people trying to make a new life in this country.

“Not all countries create this defensive asylum system for people seeking asylum at the border. That's a system that we could change, that you wouldn't have to go through a court process to defend your right to seek asylum, and that would immediately free up a lot of the backlog on the courts,” said Krehbiel, Associate for Refugees and Asylum.

Having more lawyers would be helpful, too, said Teresa Waggener, coordinator of legal resources for the Office of Immigration Issues, who did a presentation with Advocacy Coordinator Amanda Craft and Krehbiel about immigrants, refugees, asylum seekers and the church.

“People don't get their notices to appear in court … because they've had to move or because the court system is not really great about sending them out in time for people to actually receive them; there are all sorts of things that happen,” Waggener said. “But having a lawyer that's connected to that court keeps cases” moving forward. “Having a lawyer would make a huge difference in all of these cases.”

Follow further work by this committee and others at https://ga-pcusa.org.