Home News Supporting the people of Africa, Central America, the Philippines and Ukraine

Supporting the people of Africa, Central America, the Philippines and Ukraine

Day One of the International Engagement Committee 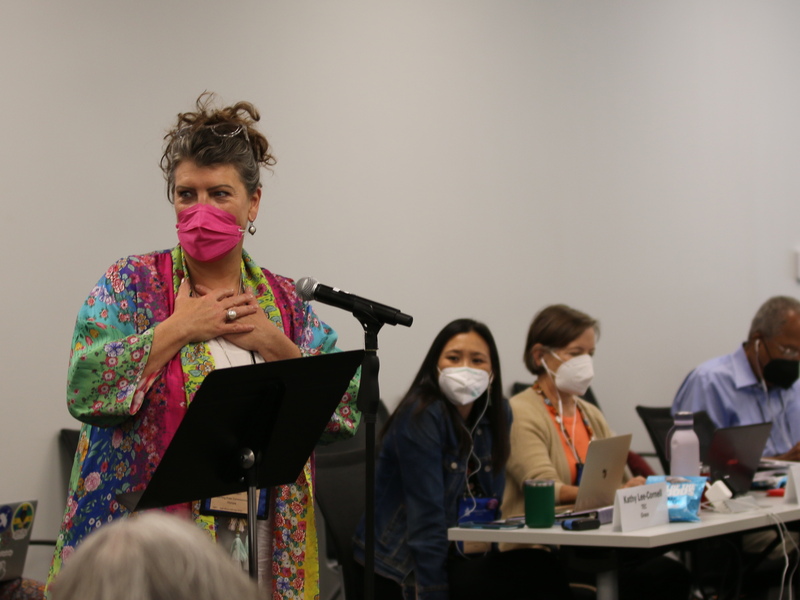 Elizabeth Archer Klein speaks to a motion at the International Engagement Committee meeting on June 27, 2022, at the 225th General Assembly of the Presbyterian Church (U.S.A.) in Louisville, Kentucky. (Photo by Randy Hobson)

Elizabeth Archer Klein speaks to a motion at the International Engagement Committee meeting on June 27, 2022, at the 225th General Assembly of the Presbyterian Church (U.S.A.) in Louisville, Kentucky. (Photo by Randy Hobson)

The first day of the International Engagement Committee (INT) saw the committee move through a busy agenda of eight items of business, approving seven items, three without amendment. The next to last item of the day, which connects to the war in Ukraine, was postponed for further discussion until the last day of the committee’s Louisville work Wednesday.

After welcomes, community building, worship and an orientation that included the establishing a committee covenant agreement and reviewing parliamentary procedures, the committee turned to its first item: “INT-18: On Engaging in Study, Prayer, and Action to Promote Peace in Ethiopia.”

With Peter Crouch as moderator and Terry Olthoff as vice-moderator, the committee heard from resolution authors and supporters, including Dick Obermanns, who presented INT-18, which is sponsored by Western Reserve Presbytery. Obermanns pointed to the devastating impacts of civil war in Northern Ethiopia, which he compared to the war in Ukraine but without similar news coverage.

The overture had no financial requests and directs “congregations, presbyteries, and synods to engage in self-directed study, prayer, and action related to the conflict” and “prospects for peace in the Horn of Africa.” Its other recommendation commended the Stated Clerk for his “Call to Prayer for the People of Ethiopia” statement from November 2021.

Four million people remain displaced in the Horn of Africa due to the recent conflict, Obermanns said, and many more are suffering from hunger. “The absence of fighting is not peace.”

Before hearing from commissioners, Crouch paused to explain how the committee is building in equity prime pauses after overture and resolution presentations to encourage a methodical approach to considering the full impact of motions, including on overseas communities. He joked that the tech people also like pauses because they give extra time to set up new-arriving Zoom speakers.

After lunch, it was time for “INT-01: Overture on Affirming the Effectiveness of Nonmilitary, Collaborative International Approaches to Resolving Conflict.”

That overture, brought by Mission Presbytery, has an estimated cost of $52,640 that covers travel for 10 people over three days in 2023 and 2024 and develops “advocacy positions and actions in partnership with those most affected by U.S. foreign policy and military action and ways to ensure their voices are heard by the decision-makers responsible for shaping these policies.”

The committee approved the overture without amendment on a unanimous vote, with 30 yes votes.

Next the committee discussed “INT-08: On Responding to the Human Needs of Those Affected by the Violence in Cameroon,” an overture sponsored by Palo Duro Presbytery. This one would take a while.

The overture includes five recommendations, such as a call for the Cameroonian government, armed separatist groups, and all Cameroonian citizens to “respect human rights and adopt nonviolent approaches to conflict resolution.”

Through the amendment process commissioners updated a list of legislation before Congress or recently handled by Congress — the kind of editing the committee did to other overtures and reports that were drafted for the 224th General Assembly and referred to the 225thé. 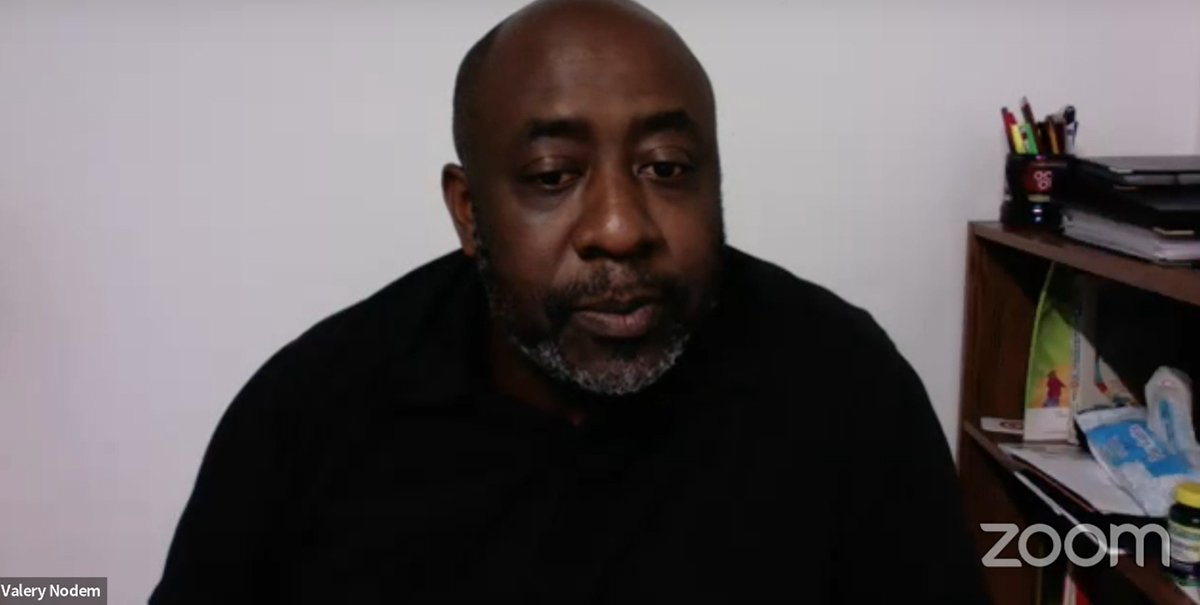 Valéry Nodem with the Presbyterian Hunger Program thanked the committee for its methodical attention and advised on word choice where needed. The church, through its connection with the Office of Public Witness, wants to highlight the most recent congressional legislation on Cameroon, Nodem said.

Other approved amendments included tweaks such as replacing “endorsing” with “commending.” In the end the committee voted 31 yes and 1 no to approve the resolution.

Committee leadership thanked the members for their patience and diligence, with the vice-moderator saying, “Sometimes that is just what it takes.” He led the group in the singing of the Doxology. After praising Father, Son and Holy Ghost, it was time for a mini-break to stretch legs. 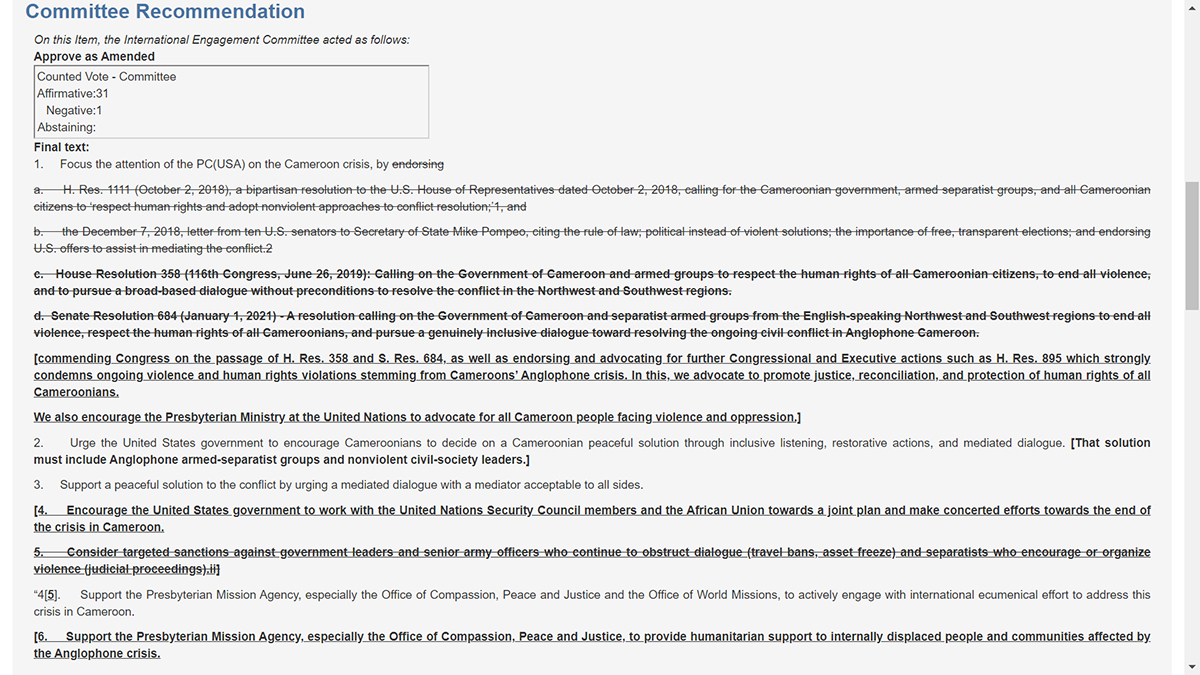 The pace picked up. “INT-05: Seeking Hope Amid Despair in Central America— From the Advisory Committee on Social Witness Policy,” saw quick discussion and approval (31 yes votes and 1 no vote) without amendment.

The estimated cost for the resolution was $13,792. Introducing it were Douglass Sullivan-Gonzalez and Linda Eastwood, who spoke about the report’s stemming from action by the GA223 in 2018, and how the people who had prepared the report have years of experience working with Central American issues, including persons with mission roles.

“Violence is our daily bread,” Eastwood said, quoting one Honduran the report team spoke with. Sullivan-Gonzalez went through the recommendations for action in the resolution, including pearls on “Public Witness,” “Mission Partnerships and Solidarity with Church Partners” and “Education and Formation for Transformation in Congregations.”

Next up was “INT-03: On Support of the Democratic Republic of the Congo,” an overture sponsored by the Presbytery of Chicago.

Rev. Virgil and Lynn Nelson, mission co-workers, introduced the overture, and spoke to the importance of the Democratic Republic of Congo as a keystone nation in West Africa, with resource richness that makes it a target of exploitation, corruption and war. American Presbyterian mission work in the region dates back to the 19th century, when Christian missionaries helped expose the genocidal crimes of the Belgian Congo regime and those of multinational corporations — a tragic fact of life into the 21st century.

The overture urges ongoing engagement with the nation. After questions about disarming militias, and an amendment changing “Islamic” with “Islamist,” the committee approved the motion unanimously without amendment, with 30 yes votes.

“INT-07: On Promoting Human Rights in the Philippines,” an overture sponsored by San Diego Presbytery, has an estimated financial cost of $39,000.

The Rev. Dr. Neal Presa, Moderator of GA220, spoke in support, calling the overture a response to the violence and human rights abuses up to and including the administration of Rodrigo Duterte. The Rev. Cathy Chang, a mission co-worker in the Philippines, spoke to “the situation on the ground,” including reasons for hope. After Presa’s urging, the committee added language specifying that the overture be mentioned at the next World Council of Churches meeting.

The amended item was approved unanimously with 32 votes.

“INT-14: On Expanding Mission Engagement and Education with Eastern Europe,” an overture sponsored by the Utah Presbytery, saw Karen Morey from Omaha speaking in support and reflecting on work by her congregation and the wider mission network in Russia and Ukraine had conducted prior to the February full invasion of Ukraine by Russia.

The overture asked for increased regional engagement, with a request for small financial support.

Ralph Clingan from Utah Presbytery discussed changes made to the overture during the past months in light of the invasion of Ukraine and in response to a written comment by the Advisory Committee on Social Witness Policy (ACSWP) that the item be referred to the Presbyterian Mission Agency for review and response — given the way the invasion of Ukraine had changed the conditions on the ground so much.

The Rev. Ellen Smith, who serves as a mission co-worker and Regional Liaison for Eastern Europe, had a different response, and encouraged the committee to amend the overture to keep recommendations of education and church connection on the immediate radar of the Assembly. The Rev. Dr. Laurie Kraus, director of Presbyterian Disaster Assistance, spoke about the outpouring of donations PDA has received since the invasion and how those resources could be used in the region.

When committee members pointed out that the changed version of the overture wasn’t present in PC-Biz, leadership walked the committee through possible procedural fixes. In the end a volunteer subcommittee formed to study the overture as homework, and the full committee voted to postpone further discussion of the item until no later than Wednesday.

The committee’s last item of business for Monday also dealt with Ukraine, “INT-19: On the Russian Military Invasion of Ukraine​​​​​​​.” A commissioner’s resolution that had been assigned to the committee in recent weeks, which Jeff Browning from the Presbytery of San Jose presented in support, saying that the resolution started with the belief that “the Prince of Peace is not the God of War.” The overtured condemns the invasion of Ukraine and warns against the inevitable spiraling consequences of war. Browning said the biggest victors of war “are always defense contractors … and the biggest losers the poor.”

“We live in solidarity with the people of Ukraine … We also pray for our siblings in Russia,” he said, going on to mention those who are protesting the war in Russia.

A committee member asked about public support for the invasion by parts of the Russian Orthodox Church. Smith and Kraus spoke about the innately ecumenical nature of PC(USA) relationships in the region, and cautioned against over-broad blaming of an entire denomination when it comes to the Russian Army invasion.

The overture was amended per a recommendation from ACSWP, which the Rev. Carl Horton from ACSWP spoke to, striking “to resolve the conflict” after wording reading “the immediate resumption of internationally mediated negotiations.”

The amended commissioner’s resolution was approved with only one no vote.

The International Engagement Committee reconvenes Tuesday morning. You can watch its deliberations online through the GA225 website and access their schedule here.