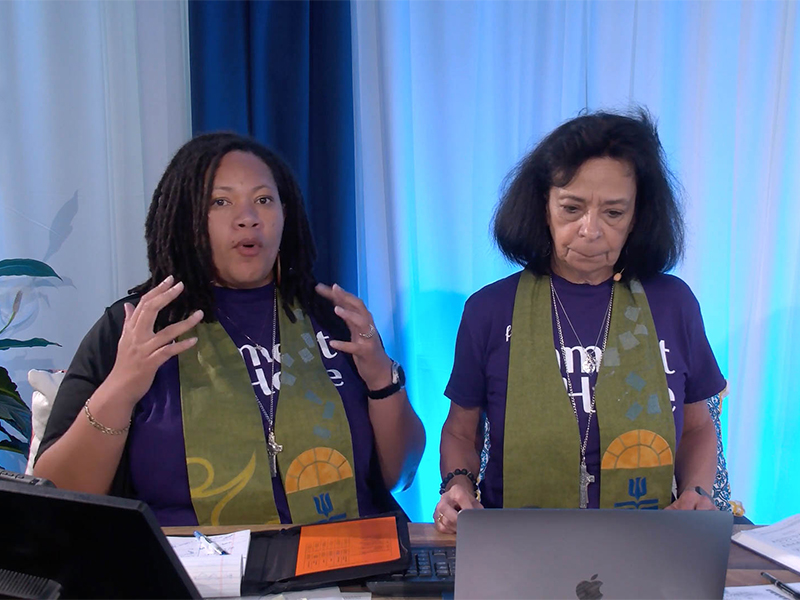 At its July 1 meeting, the financial committee voted to change the recommendation of the Special Committee on Per-Capita Based Funding and National Church Financial Sustainability in FIN-10 to “Form a commission to oversee and facilitate the unification of OGA and PMA into a single agency …” to forming a task force to do the same. The rationale was that a commission has the power to implement changes while a task force can make only recommendations to the full Assembly. A commission, some said, could be disruptive and jeopardize work such as the PMA’s quickly growing Matthew 25 invitation.

But, in the second of three plenary sessions Friday, Special Committee Co-Moderators Valerie Young and the Rev. Laura Cheifetz reiterated their call for a commission during their presentation to the full Assembly, saying that it is necessary to make urgently needed change.

“The per capita and financial sustainability committee continues to recommend that the 225th General Assembly unify the Office of the General Assembly and the Presbyterian Mission Agency through formation of a commission in order to be aligned in mission, purpose and the use of resources,” Young said.

“The problem as set forth in the work of the full committee is one of sustainability of the witness of the PC(USA), sustainability of our witness into the future. This is a conversation about systems and their relationships, the way we do our work together, not about specific people or roles.”

They characterized the problem as lying in circumstances such as disparate funding sources, competing visions and messages, and a system that relies on leaders of the agencies working well together.

Almost as soon as the Special Committee’s report was complete, Teaching Elder Commissioner Alice Tewell moved that the overture revert back to the commission language, which was followed by several amendments pertaining to the makeup of the task force or commission, including the addition of Young Adult Advisory Delegates from the 225th Assembly — allowing that for a commission, they would have to be ruling elders — and requirements for diversity in the group.

Among those speaking against the commission was the Rev. Gregory Bentley, Co-Moderator of the 224th General Assembly, who cited the collaborative work of PMA President and Executive Director the Rev. Dr. Diane Moffett and Stated Clerk of the General Assembly the Rev. Dr. J. Herbert Nelson, II as reasons to go with a task force. 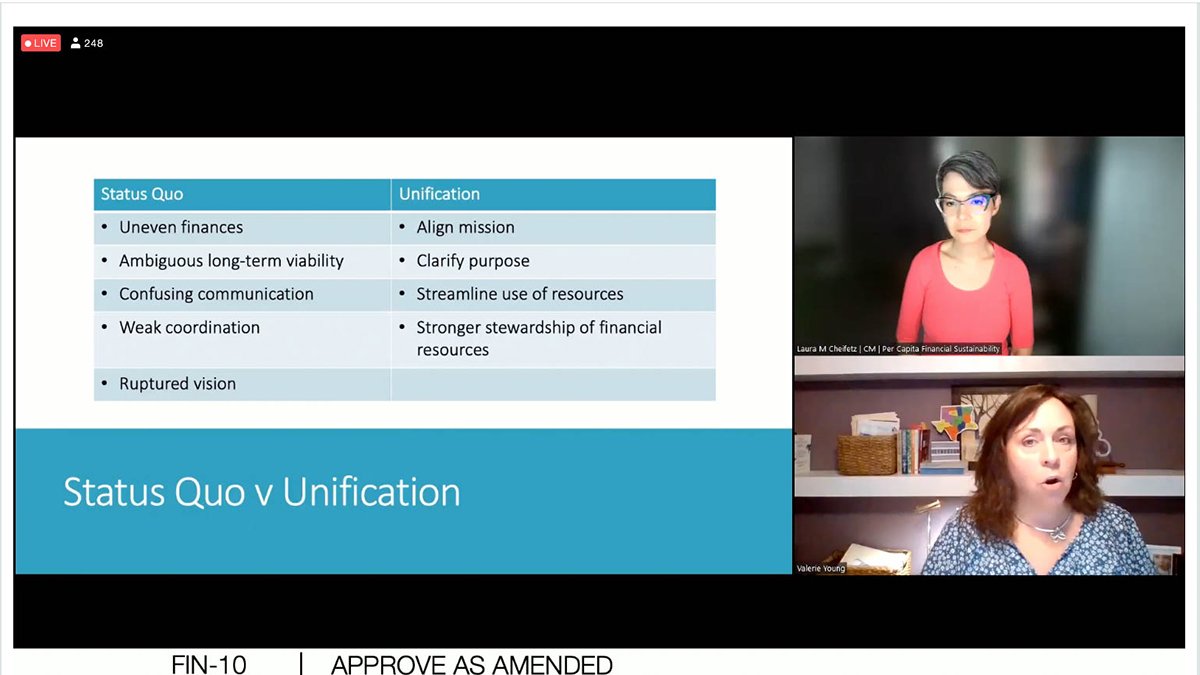 Special Committee on Per-Capita Based Funding and National Church Financial Sustainability co-moderators Valerie Young and the Rev. Laura Cheifetz presented their report to the General Assembly during the 13th Plenary of the 225th General Assembly of the Presbyterian Church (U.S.A.) on July 8, 2022.

“It is my view that the commission is wrongheaded and heavy-handed for this reason,” said Bentley, who noted that he will be joining the PMA Board in August. “If the Assembly votes to unify, I believe Dr. Nelson and Dr. Moffett can work with the task force to bring about the desired result.”

The Rev. Stephanie Anthony, moderator of the Committee on the Office of the General Assembly, countered, “We specifically support a commission over a task force because we know that goodwill and strengthening relationships, no matter how strong and well-meaning, simply aren’t enough to effect change in a complex system.”

As the session drew to an end, the Assembly voted to substitute the original Special Committee recommendation for the main motion 278–89 and approved FIN-10 as amended 321–54.

In the aftermath of the vote and its preceding conversation, in which hurt and acrimony was expressed by people on both sides of the issue, GA225 Co-Moderator the Rev. Shavon Starling-Louis observed, “I find it ironic … that a conversation around unification can feel dividing.

“All I can say is people are going to be part of this journey and that there is a deep love that I know exists for everybody in this work. And I’m just praying and trusting that that spirit and desire for the building up of God’s people will be the most prevailing aspect of what we all experience in this process. This is not light work, siblings. Naming things that have been difficult to name, navigating spaces we’ve never been, is not light work. So, we will have to take care of ourselves, and we’ll have to take care of each other.”

Following the dinner break, the third and final plenary of Friday was set to take up the second half of the Special Committee’s recommendation to appoint a funding model development team to explore possible funding model experiments.

Moffett was formally re-elected to a second four-year term as president and executive director of the Presbyterian Mission Agency. The General Assembly Entity Policies and Procedures Committee had unanimously recommended Moffett’s re-election June 30, and the full Assembly concurred in a vote of 352–5. 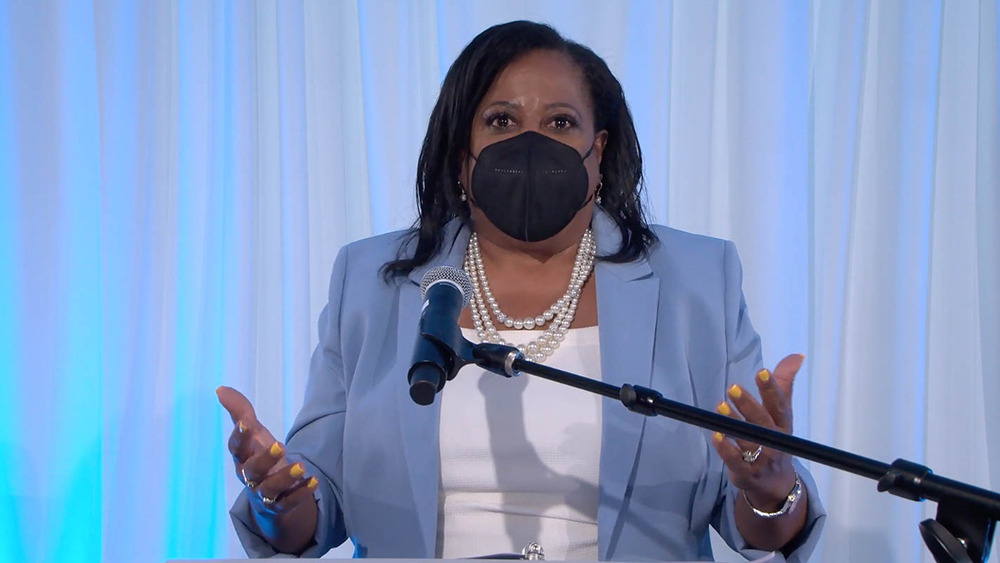 Moffett addressed the Assembly in person from the studio in the Presbyterian Center’s new Conference Center, saying, “Given all that we are experiencing now, the Matthew 25 vision has become even more important. And this vision is one which requires deep and lasting commitment, not merely a two-year work plan. I'm grateful that our denomination is waking up to new possibilities. This holy endeavor comes alive as Presbyterians commit to building up the Church and making disciples of Jesus Christ who make a difference in the world.”

She concluded by saying, “I am ready to continue to follow God’s Holy Spirit into the renewal that is afoot by God's grace. Let’s go!”

The report of the International Engagement Committee opened the second plenary Friday. Moderator Peter Crouch noted that most of the committee’s work had been approved on the consent agenda, but the committee brought several items to the full Assembly, including a call for peace on the Korean Peninsula, expanding mission engagement and education with Eastern Europe and a condemnation of the Russian invasion of Ukraine.

Then the committee presented one of the hot-button overtures of the General Assembly: INT-02: “On Recognition That Israel’s Laws, Policies, and Practices Constitute Apartheid Against the Palestinian People.” 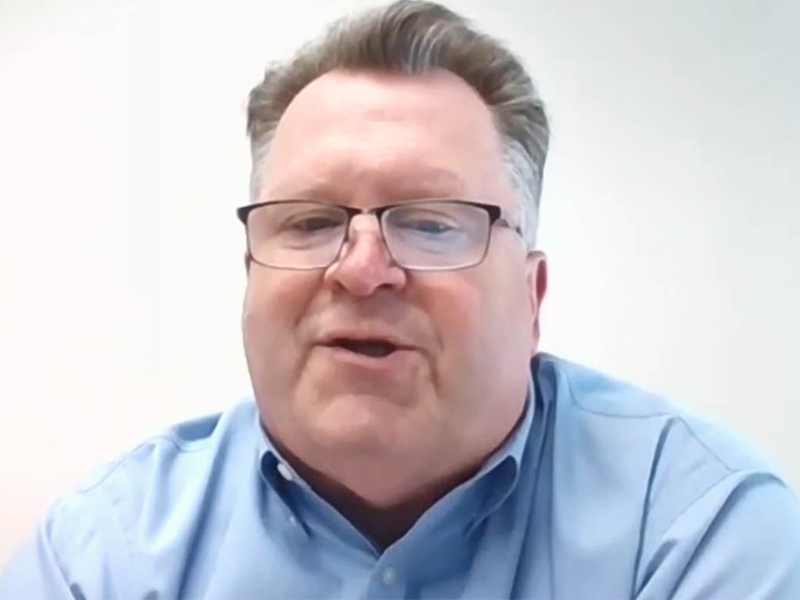 International Engagement Committee Moderator Peter Crouch introduced the committee's work during the 13th Plenary of the 225th General Assembly of the Presbyterian Church (U.S.A.) on July 8, 2022. 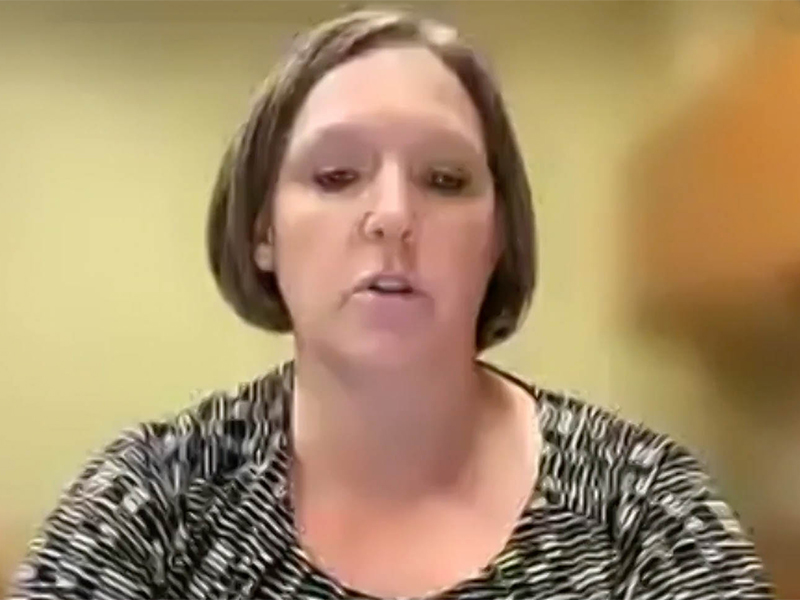 Crouch detailed the path of discernment the committee took and noted, “In our subsequent debate, an amendment was made to add the phrase ‘the government’ in front of the word ‘Israel,’ so that the first sentence would focus on the government of Israel and its actions for the Palestinians living under its control. It does not criticize the Jewish religion, or all who practice it.”

The overture did generate dissenting comments from several commissioners, including one who said he had been in South Africa at the end of apartheid and Israel, and he contended the conditions Palestinians live under did not constitute apartheid.

Mission Advisory Delegate Douglas Dicks, who is based in Jerusalem, noted that Human Rights Watch has said, “Israeli policy in the Palestinian territories constitute crimes against humanity. In the West Bank, Human Rights Watch claims the repression includes draconian military rule over the Palestinians, while Israeli settlers are accorded full rights according to Israeli law. The situation constitutes systematic oppression that amounts to apartheid.”

Some speakers said the statement did not sufficiently recognize human rights violations in the United States, while others said language like that diluted the message about the Israeli government. One amendment to add such language was not approved.

One commissioner expressed concern that the policy would impede relationships with the Jewish community in the United States, and Teaching Elder Commissioner Peter Martin of Philadelphia Presbytery said, “There’s a real plight to our brothers and sisters in Christ in Palestine, as well as many Muslims. But I don’t think this overall statement really gets there. And I would urge not to amend it, but just purely to vote it down, and we can come back in two years.”

Commissioners approved the statement in a 266–116 vote.