Nelson calls on Presbyterians to "harvest tears" into action 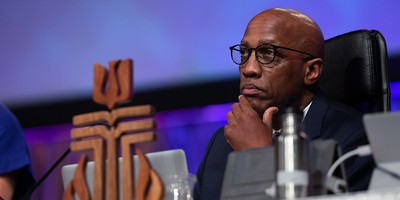 The Rev. J. Herbert Nelson, II, stated clerk of the General Assembly, has issued a statement in response to the executive order issued on June 20, 2018, by the president of the United States.  Nelson points out that, though Joseph's call to flee to Egypt has long since passed. "People are still in danger. People still flee into the night to find safety..."

The Stated Clerk calls on Presbyterians to, "Take the tears you have shed and harvest them into acts of peaceful resistance, advocacy, pastoral care, and prayer to bring about peace for the hundreds of families suffering from this nation’s border policies."

The full text of the statement is below, followed by additional information and resources to provide guidance for those discerning ways to take action:

God’s angel showed up again in Joseph’s dream and commanded, “Get up. Take the child and his mother and flee to Egypt. Stay until further notice. Herod is on the hunt for this child, and wants to kill him.” Joseph obeyed. He got up, took the child and his mother under cover of darkness. They were out of town and well on their way by daylight. They lived in Egypt until Herod’s death. (Mt. 2:13–15)

God spoke to Joseph, by way of an angel in a dream, and the father of the newborn Jesus obeyed. Mary and Joseph fled into the night to save the life of their child.

Many read this Bible passage and think of a time long ago, distinct from the here and now. This was indeed an extraordinary time, the time our Savior was born. But I remind you that our Savior became flesh and dwelt among us. He was in relationship with us and his life was marked by the same wonder and vulnerability that touches humanity today. People are still in danger. People still flee into the night to find safety in lands that are not their own and God continues to find ways to speak to us.

Families, to save the lives of their children, are arriving at the southern border of the U.S. just as the Holy Family arrived in Egypt. They are not finding refuge from the many “Herods” that threaten life in this era. They are being torn apart. They are being incarcerated in prisons and, sinfully, our neighbors profit from their misery.

The Executive Order of June 20th does not repent of this sin. It does not offer relief to the many families that have already been separated and it does not set the prisoners free. Instead families, whom God empowered with the wisdom to flee danger and whom God accompanied along the way, will be incarcerated together while parents are prosecuted and their immigration cases are decided.

Many of you in the church have called our offices, tearful and broken by what we are witnessing. Friends, God has not forsaken us, not those of us who are imprisoned nor those of us watching in horror. I remind you that Jesus did grow into an adult and his ministry is what gathers us all to one another this day. When he was crucified and died, the disciples were also afraid. They hid behind locked doors. But Jesus rose from the dead and appeared to them saying, “Peace to you. Just as the Father sent me, I send you” (Jn. 20:21). For all of us, those in prison and those enjoying freedom, I say “Peace to you.” And for those who enjoy freedom, I remind you that you have been sent by the risen Christ to extend that peace to all who are oppressed. Take the tears you have shed and harvest them into acts of peaceful resistance, advocacy, pastoral care, and prayer to bring about peace for the hundreds of families suffering from this nation’s border policies.

In the name of the Christ we serve,

Information & Resources
Learn how to get involved in your community.