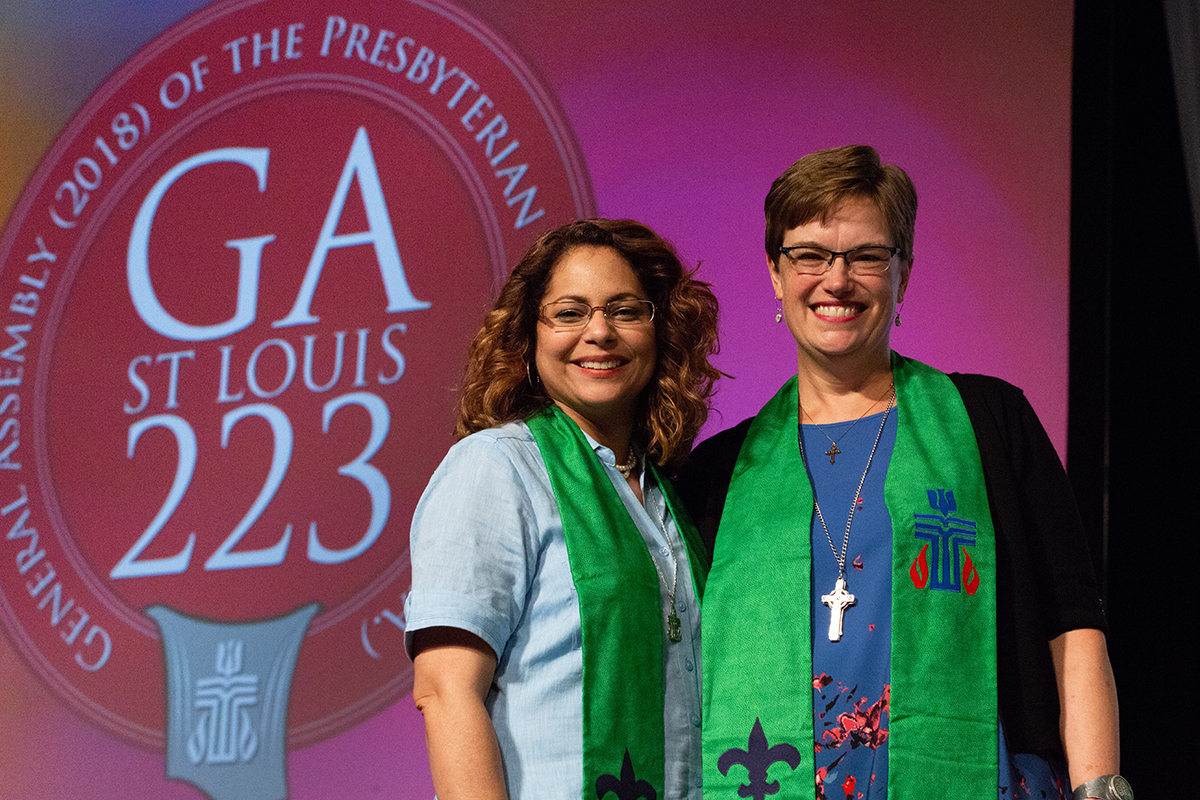 In other actions involving Presbyterian Church (U.S.A.) leadership, the assembly:

Fossil Fuel Divestment: By a vote of 332-178, the assembly voted in favor of a minority report that called for the PC(USA) to continue its corporate engagement with fossil fuel companies—through its Mission Responsibility Through Investment Committee—rather than divest from those companies. The Assembly Committee on Environmental Issues had voted 35-20 for the divestment proposal offered by the Presbytery of Hudson River. After the minority report became the main motion, it was approved by the assembly 409-106.

Israel-Palestine/Middle East: After spirited debate in the Assembly Committee on Middle East Issues that spilled out into the hallways of America’s Center (St. Louis’ convention center), the assembly raced through the committee’s report in just thirty-five minutes on June 22. Among its actions, the assembly:

Racism/Poverty/Violence: The assembly engaged in various acts of public witness that sought to engage issues of racism, poverty, and violence in St. Louis under the umbrella of Stated Clerk J. Herbert Nelson, II’s, Hands and Feet initiative. In addition to a number of groups who came to St. Louis to engage in Hands and Feet service/learning projects during the assembly, several “mission trips” for assembly-goers engaged with various faith-based community groups to address poverty and racism in the city. The offering from the opening worship service raised more than $54,000, which after a dramatic march by nearly 1,000 assembly-goers from America’s Center to the City Justice Center on Tuesday afternoon, was given to ArchDefenders, a faith-based group that bails low-level offenders out of jail. Nearly three dozen people, victims of St. Louis’ draconian cash bail system, were released from custody with the money. In its actions, the assembly:

Immigration: Following on statements issued by General Assembly Stated Clerk J. Herbert Nelson, II, the assembly called upon the federal government to end family separations at the U.S.-Mexico border, to immediately reunite parents with their children, to inform every parent where their children are being held and their condition, to stop using separation of children from their parents as a tactic to force criminal confessions; and called upon Presbyterians to support immigrant families, particularly parents and their separated children in any ways they can. The assembly also addressed war, violence, and human rights in Central America (particularly Nicaragua), South Sudan, Yemen, Syria, Madagascar, and the Korean Peninsula.

Gun Violence: The assembly reaffirmed previous General Assembly policies designed to reduce gun violence, called all Presbyterians to pray for a movement of the Spirit to engage Presbyterians in nationwide actions to prevent gun violence, and urged them to create opportunities to study the issue of gun violence, with an emphasis on resources produced by the Presbyterian Peace Fellowship.

Paid Family Leave: After long debate in both committee and plenary, the assembly referred to a task force to report back to the 224th General Assembly (2020) proposed actions to develop denomination-wide standards and financial support mechanisms for paid family leave for church workers.

Congregational Leadership: The assembly rejected, by margin of 425-57, an overture from the Presbytery of Monmouth that would have allowed congregations to elect and ordain ruling elders without requiring them to serve on session. The proposal was designed to provide more lay leadership in a church that is changing—leadership, for instance, for new worshiping communities, immigrant fellowships, and other nontraditional faith communities.