Efforts are now underway to “Close the Workhouse” 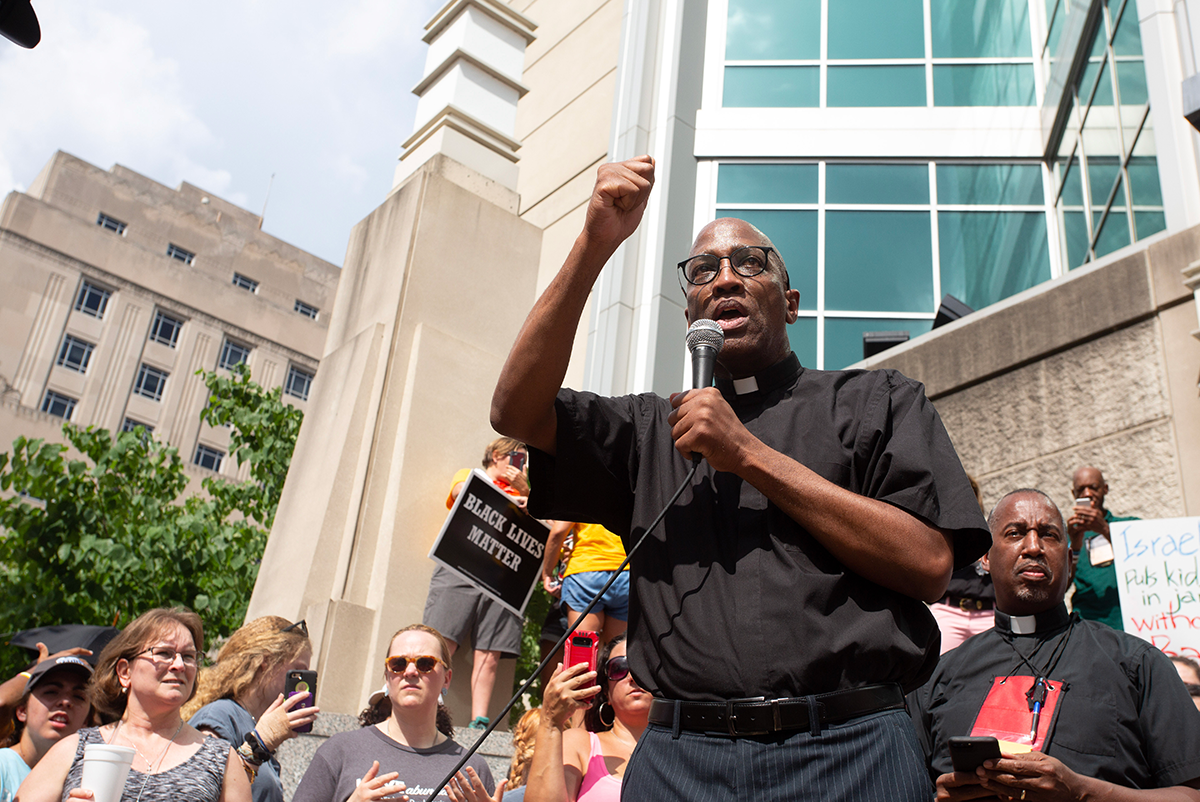 It has been described as one of the major highlights of the 223rd General Assembly (2018) in St. Louis. Hundreds of Presbyterians, including the Reverend J. Herbert Nelson, II, General Assembly Stated Clerk, Co-Moderators Vilmarie Cintrón-Olivieri and the Reverend Cindy Kohlmann, and Presbyterian Mission Agency Executive Director the Reverend Diane Moffett, walking to the City Justice Center. With a collection of more than $47,000 received at the assembly’s opening worship service, Nelson turned the money over to local organizations to begin bailing out individuals who had been prescreened for release because they could not afford their cash bail.

In the weeks that have passed, local organizers like the Bail Project and the St. Louis Act Council have run into constant roadblocks as people who are released find themselves facing incarceration again at another local facility.

“People who are most marginalized are still stuck in jail, so we are in a re-strategizing moment where the folks who were recently released are in constant danger of being slapped with another charge,” said Michelle Higgins, co-chair of St. Louis Act. “Some have gone back to jail a few times because they didn’t know they had another warrant in another municipality.”

Higgins says the inability to pay bail has been a driving force in mass incarceration over the last fifteen years, resulting in job loss, mounting fines, and child custody issues. The Bail Project has been screening incarcerated individuals and seeking to help those whose bail is less than $5,000 so more people can receive assistance.

“Our major focus now is how to fully and more finally disrupt the cash bail system and we are certain that involves moving our folks into membership of a campaign,” she said. “We are not just bailing people out, we want them to get organized and lead a campaign that closes the local jails. Approximately 95 percent of the people in there are constitutionally innocent.”

Higgins refers to the medium security institutions as workhouses of forced labor and believes now is the time to “close the workhouses” and do away with cash bail.

“Everyone that we interview or interact with tells us the best way to help them is to deal with the inhuman conditions in these facilities,” said Higgins. “Some people have contracted lice and have to shower with a bleach solution. We see people with skin burns who have no choice but to shower with things no human should have on their skin.”

Higgins says they hear reports of people getting sick and having asthma attacks because they come in contact with fecal matter from rodents and roaches.

“The people living in these facilities tell us we need to do more than just get them out of this jail. We have to close the jail,” she said. “We were able to interact with hundreds of people who told stories about being treated inhumanely simply because they are poor. The last thing we want to do is to pay cash into a system that continues to misuse and misappropriate funds in order to criminalize, dehumanize, and marginalize people of color and low-income levels.”

Higgins says the people who have the least money are the ones most criminalized.

“Often when we attempt bail outs, we will pay bail for one individual in seven or eight municipalities. What they really want is to see local activists and organizers take their message to the mayor’s office,” she said. “They want us to do more than just put money in a system that is constantly putting them back into jail. What we need is to close jails.”

Nelson said he supports the ongoing efforts in St. Louis and other cities. “We marched for and supported the release of folk from the detention center in St. Louis during the General Assembly because we believe in following the mandate of Jesus Christ to bring release to the captives and to set the prisoners free,” he said.

“Our actions to help individuals must be accompanied by actions to bring down the systems—cash bail and mass incarceration among them—that continue to oppress and dehumanize people of color and those who live in poverty. Jesus Christ would not tolerate it and neither should Christ’s church.”

“Racism and criminalization of poverty is so strong and etched into the very fabric of our nation, that it doesn’t matter how much money you have, it matters how serious you are about confronting authority publicly,” said Higgins. “We have the power to close this jail. We are not just going to bring money to set these people free, we are going to demand that we divest from cash bail by ending the cash bail system.”

Higgins says many of the people being held behind bars are being held for “petty and low level, nonviolent crimes.”

“The average length of stay in a jail is over 200 days, and we were discovering that the length of time behind bars destroys the person on the inside, it makes them question themselves, interrupts their emotional health,” she said. “It is so painful for them to go out and still live in fear of other charges within the municipality.”

Higgins says she’s grateful for the support of faith leaders and churches like PC(USA) and hopes to garner more support in the weeks and months to come.