Home News PHS Live: Reckoning with the past

PHS Live: Reckoning with the past

Three stories of pastors pressured or forced to leave their congregations

“PHS is asked to inform the whole world about what Presbyterians have done,” Staniunas said. “These aren’t my stories to tell … but we’re here because archival labor in the PHS building touches on the stories.”

Watch the full session below.

The first story involved the Rev. William Drew Robeson, who left Witherspoon Street Presbyterian church in Princeton, New Jersey in 1901 after complaints by white Princetonians about his ministry to African Americans. Staniunas outlined the story, which included an administrative committee from presbytery recommending “the dissolution of the pastoral relationship” between Robeson and the Witherspoon Street church.

In 2014, a task force from the Synod of Northeast read through the committee’s records at PHS and determined that Robeson leaving the congregation was “an ecclesiastical lynching.” Because of the task force’s findings, the synod retired the mortgage on the church manse the Robesons had lived in, an act of atonement and reparation to the Witherspoon Street congregation.

That happened despite the records at PHS not containing what Staniunas called “a smoking gun.” The synod team had considered the information it did find in the records against a wider history.

“Powers tend not to indict themselves,” Staniunas said. “But the reality was that [Robeson] was hounded out of church for his work for Black rights.” 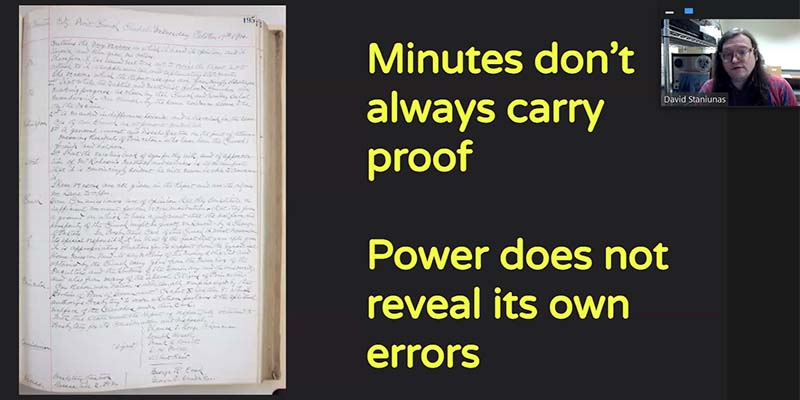 Rollins was another African American pastor pressured to leave the congregation he served, Trinity Presbyterian Church in 1950s Tallahassee. Rollins was an outspoken supporter of a campaign to desegregate busing in the Florida capital.

Staniunas, who has written about Robeson and Rollins on the PHS blog, said a sermon by Rollins about the incident is archived at PHS and is also included in the General Assembly-mandated history of Black mid councils, “All-Black Governing Bodies,” which turned 25 in 2021.

Other PHS holdings include statements by leaders of the PCUS denomination bemoaning Rollins’s stance for civil rights because it hurt fundraising for a new church building.

“No one comes out of the story clean,” Staniunas said. Records show that the first Black moderator of a PCUS General Assembly, the Rev. Lawrence Bottoms, then a staff member of the PCUS Board of Church Extension, recommended that Black pastors should in the future be received into white mid councils instead of Black ones. In a time of legal segregation, that would have made it even more difficult for Black church leaders to speak out against the racist system.

Staniunas pointed out that everyone in Rollins’ story was doing what they were supposed to do according to church bureaucracy, “except for Metz.”

“All actions are decent and in order until they are challenged,” Staniunas said.

The Rev. Dr. Cornell Edmonds called into the Zoom session to share memories of Rollins, who organized the National Committee of Black Churchmen after moving to New York City.

Edmonds, a PHS Board Member and former stated clerk of the Presbytery of New York City, described Rollins as a steadfast supporter of the city’s young Black pastors.

“When I entered the presbytery [Rollins] embraced me," Edmonds said. "It let me know that there were these lions looking after the pride.”

Edmonds also spoke about the Robeson story, which he first read about in The Journal of Presbyterian History. 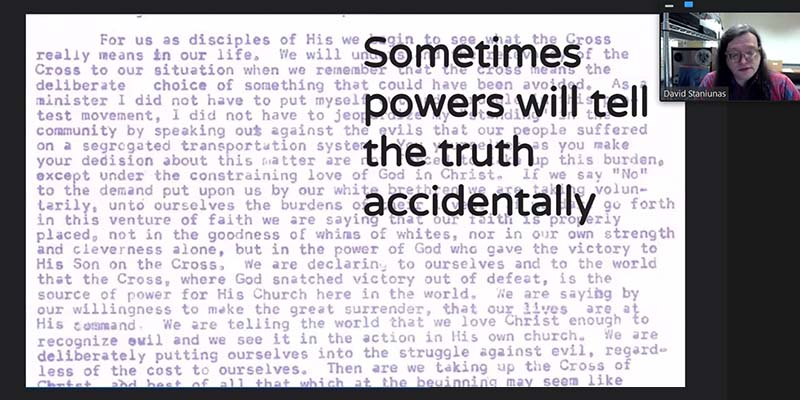 “Being Faithful to Christ’s Command,” a sermon by Rollins.

The last story Staniunas shared was about Memorial Presbyterian Church in Juneau, Alaska, and its pastor, the Rev. Dr. Walter Soboleff, Sr.

Memorial, a majority Tlingit church, was consolidated by the Presbytery of Alaska in 1963 into a white majority church, Northern Light— despite the vitality of the Memorial congregation and the leadership Soboleff provided to Native Alaskans throughout the state. When Memorial closed, the presbytery moved him to another call.

The records of Memorial had been at PHS until a year ago, when the society digitized and shipped them to Juneau “as a simple act of restoration,” Staniunas said.

Another PHS Live audience member, Maxine Richert, spoke about growing up in Juneau and her family’s close ties to Memorial, as well as Soboleff’s legacy in the Juneau area, where late in his career he led the Sealaska Heritage Institute.

Richert also discussed the work of atonement taking place at today’s Northern Light United Church. Last fall, that congregation worked with the Presbytery of the Northwest Coast to draft and submit an overture to the 225th General Assembly requesting that it “meaningfully address the wounds inflicted on Alaska Natives” by the closure and merger of Memorial. The overture also requests “posthumous apology, acknowledgement, and confession in public ceremony, attended by national and regional church officials, to the late Rev. Dr. Soboleff, Sr.”

During the Q&A end of PHS Live, Staniunas said that the historical society works to support the overall racial justice work for the national church, including an approved overture from GA 224: “On the Church in This Moment in History — Responding to the Sin of Racism and a Call to Action.”

He also mentioned how, in the last 18 months, numerous Presbyterian congregations have asked PHS to help them explore their church’s past regarding racism.

“Candidly it’s been a struggle for us,” Staniunas said before explaining how analyzing history is different labor from preserving it.

For congregations looking to do self-study, he recommended guides by three churches PHS has shared through its Resources for Self-Study on Racism page. He ended the webinar by encouraging congregations conducting self-studies to contact PHS when they are finished with their work.