Much of the conversation focused on Street-Stewart’s insights as a Native American, and connected the work of history with the goals of restorative justice recent General Assemblies have embraced.

Street-Stewart spoke at length about being a co-moderator during COVID-19, the Restorative Actions special offering at this summer’s GA and other church efforts making reparation for economic disparities resulting from white privilege. Later in the discussion she spoke from the heart about recent news attention on Native American Boarding Schools and ways PHS and other historical institutions can do a better job partnering with groups from non-dominant cultures.

The Assembly-related focus on Native American issues included the truncated 224th General Assembly, when Street-Stewart and Bentley were elected. That Assembly approved two measures extending the mandate of the Native American Coordinating Council, designating 2020–2030 a “Decade of Confession and Repentance” from the Doctrine of Discovery, and instructing mid councils with congregations with connections to Native American churches and chapels to develop a process for repair and improvement of church properties.

At least two overtures coming before the 225th General Assembly this summer relate to historic and ongoing injustice toward Native Americans: the first sponsored by the Presbytery of the Northwest Coast and the second by the Advocacy Committee for Women's Concerns and Racial Equity Advocacy Committee.

The full PHS Live interview with Street-Stewart can be viewed below:

Taylor is PHS Executive Director, a position she began the same year Street-Stewart and Bentley were elected co-moderators.

Her opening question — about being a co-moderator during the pandemic — gave Street-Stewart a first chance to recognize her teamwork with Bentley. “I do not work alone,” she said before explaining some ways her experiences as a Native American and Bentley’s as an African American have shaped their church leadership over the past two years, including their attending church gatherings across the country virtually and hosting monthly Good Medicine Facebook discussions with guest speakers.

“Our two cultures have contributed so much to the church and this country,” Street-Stewart said, “including what it means to be resilient, to resist forces of oppression and injustice.”

An appreciation of history was foundational to her and Bentley’s leadership even before their election. The Sankofa bird standing in the Mississippi River, which they adapted as a symbol, combines African and Native American traditions.

Street-Stewart said the COVID-19 pandemic has revealed other societal pandemics, including racism and the persisting legacies of genocide. She connected systemic inequality to the nation’s history of white supremacy, and a resulting economic disadvantage for Native Americans and African Americans, as well as for others outside the dominate culture.

That inequality informs the co-moderators’ request that the special offering at this summer’s General Assembly opening worship go to Restorative Actions, which its website describes as “an economic justice mechanism for mid councils, congregations, individuals and interested organizations to examine their assets and determine what portion of their wealth can be attributed to white supremacy.”

“If you want to talk about where the church is today and where we want to be tomorrow, we have to start with remembering,” Street-Stewart said. “Remembering often puts us in a place where we can see who has been hurt and who has benefited.

“If we can honestly address reconciliation, then we can rejoice in new life together.”

The special offering will be directed to communities hurt by white privilege, “so they can decide how best to use the resources.” A Restorative Actions curriculum will be available for study by the entire church later in the year.

Taylor turned the discussion to “the racist and destructive legacy of Native boarding schools,” asking Street-Stewart how the PC(USA), as a denomination that established and ran such schools, can work toward repairing that wrong.

Street-Stewart said it is difficult for her and other Native Americans to reflect on that history, “because the remembrance comes in the form of trauma.

“We don’t approach this as a subject matter in the distance. So many of us have parents and grandparents who were at boarding schools at different times.”

“There was profit to be made. But also those schools scrubbed out native culture” and spiritual practices. 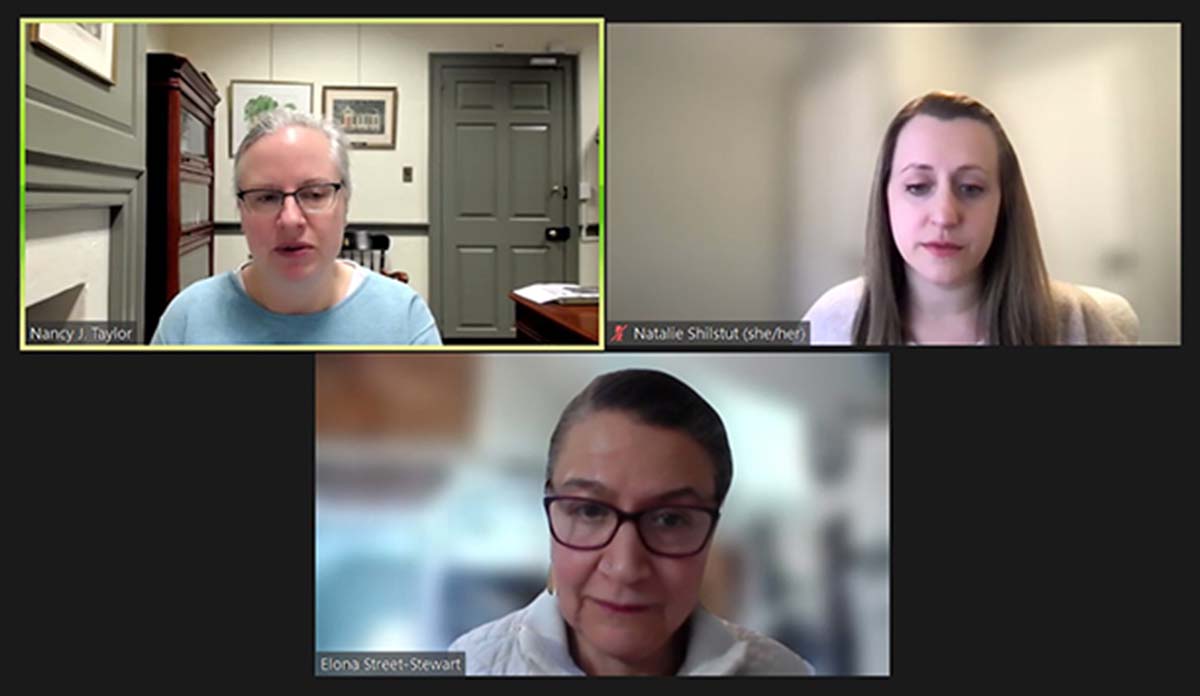 Street-Stewart mentioned the Indian Welfare Act of 1978 and other historic actions that responded to racism toward Native Americans. Later, she shared ideas with Taylor about how PHS and other archives and cultural institutions can raise more awareness of the lasting suffering created by boarding schools.

She noted that for many Native Americans, “the expression of their lives is already in collections. So many photos and treaty documents are in archives because the assumption was that we would disappear.

“What’s important now is access to those records and restoration of what’s found in those records” to Native people.

“We think of archives as memories, but they only give one perspective. What may be missing in these various collections is the perspective of loss.”

Street-Stewart added that “the consequence of removal” of Native Americans from tribal lands is often missing from history programming.

In the Presbyterian context, “We know there are session books all over the country, and cemetery records … But there are also records explaining why settlers came to certain places and what happened to Native people when that happened.”

Focusing on that history would help PHS and other cultural institutions establish what Street-Stewart called “a relationship of trust” with Native people, a point she repeated later following a question from PHS Board Director Tim Hoogland, who like Street-Stewart lives in Minnesota.

The co-moderator praised the “broader narrative of truth and justice in the PHS archives that is emerging.” In recent years PHS has focused more on collecting records of groups traditionally underrepresented in the national archives of the PC(USA) and sharing more resources and stories related to those groups. 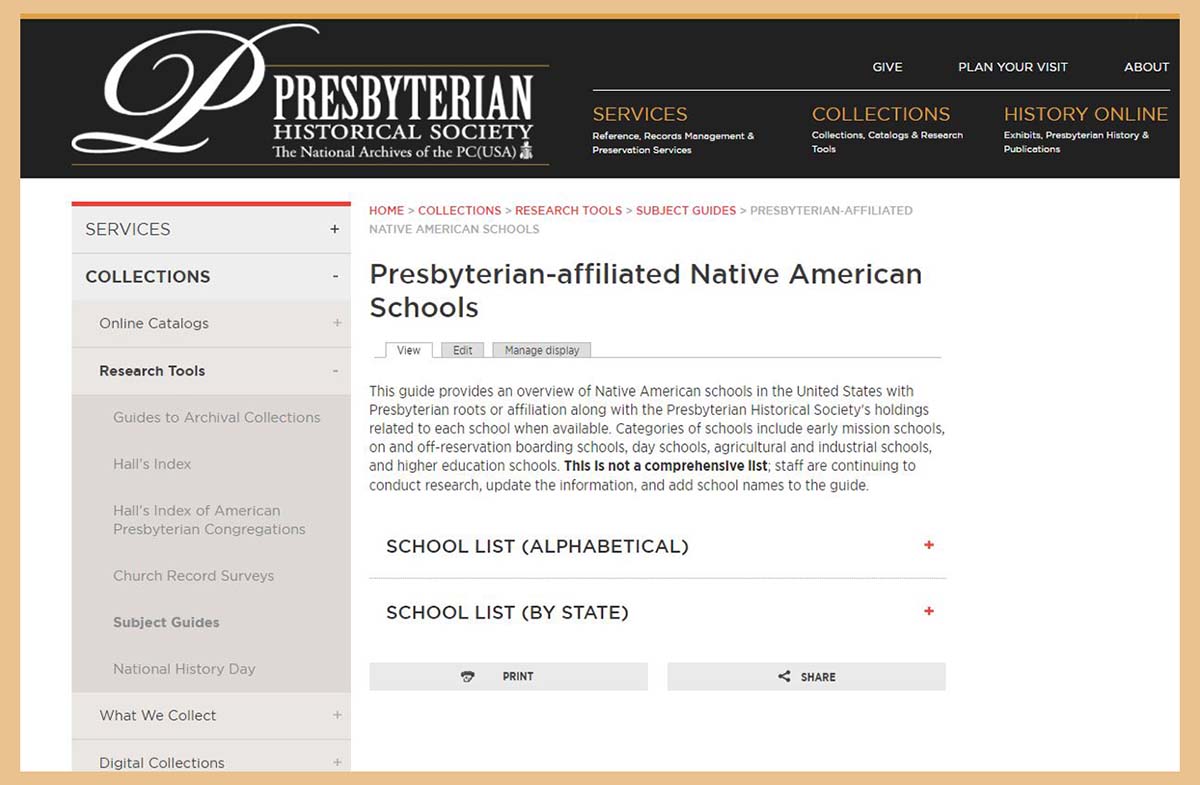 Street-Stewart urged PHS to steer away from programming that creates an impression of a historic village or periods of Native American history in isolation, and instead “understand that you are immersing yourself in a culture that is alive and resilient and has its own truth that needs to be understood.”

Taylor closed off the one-on-one discussion with the question, “Where do you see hope of what people are doing in the church now?”

Street-Stewart praised the Matthew 25 invitation for encouraging Presbyterians to engage with their communities in new ways, “for instance food banks opening up into food distribution centers and networks.” She also cited greater representation in leadership, including decisionmakers who come from communities impacted by racism and other forms of injustice, and the involvement of young people who have fewer biases than previous generations.

She explained how hope can be found even in the Sankofa bird, which holds an egg in its mouth, and can be seen as “carrying something hopeful and with great potential into the future.”

At the end of the session PHS Director of Programs and Services Natalie Shilstut relayed questions and comments from audience members about land acknowledgments (Street-Stewart said they are important but should only be the beginning of engaging with the history of Indigenous people and their displacement), how best to refer to Native Americans (use the tribal name if possible) and the upcoming mid-term election (Native Americans are often targeted for voter suppression).

Taylor closed the session with thanks to Street-Stewart and a plug for a special PHS Live this week with the Rev. Jimmie Hawkins, Director of the Office of Public Witness, who will speak about his new book, “Unbroken and Unbowed: A History of Black Protest in America,” and how Presbyterians have been involved in movements for racial equality.

CLICK THIS LINK to join that Zoom session beginning at 4:55 p.m. Eastern Time on Thursday, February 24.