Day 2 at the Race and Gender Justice Committee 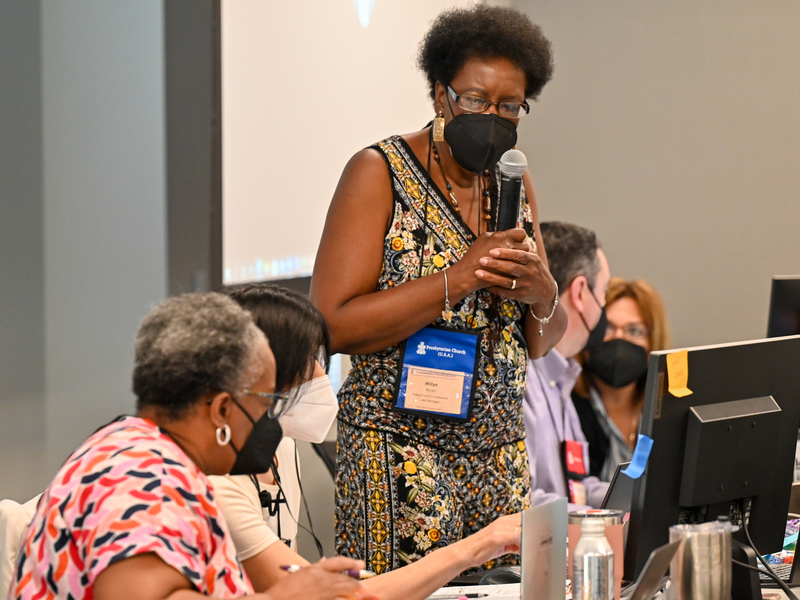 Committee Moderator Willye Bryan leads the Gender and Racial Justice Committee on June 23, 2022, during the 225th General Assembly of the Presbyterian Church (USA) in Louisville, Kentucky. (Photo by Rich Copley)

Committee Moderator Willye Bryan leads the Gender and Racial Justice Committee on June 23, 2022, during the 225th General Assembly of the Presbyterian Church (USA) in Louisville, Kentucky. (Photo by Rich Copley)

The Race and Gender Justice Committee approved four main motions on its second day of work in the Presbyterian Center, sending to the full Assembly overtures and resolutions apologizing for the sin of slavery, encouraging the installation of more pastors at congregations of color and seeking to repair the lasting breach of racism.

The committee’s first work was “RGJ-08: On Offering an Apology to African Americans for the Sin of Slavery and Its Legacy,” with committee vice-moderator Lori Yamauchi at the leadership microphone in the morning.

The overture, sponsored by Giddings-Lovejoy Presbytery, had six recommendations, ranging from the apology mentioned in its title, a proposed “litany of repentance” and direction about who in the PC(USA) should make the apology and to whom.

Commissioners approved amendments clarifying the roles of national agencies and mid councils and emphasizing the denomination’s overwhelming whiteness. Another amendment was advanced by a proposing commissioner who said the change would make it easier to get the motion through plenary. Why? The new wording gave rhetorical distance — for those wishing to find it — between “the foundations of the country” and “slavery.”

Before 11 a.m., the committee members voted unanimously to approve RGJ-08.

It immediately turned to “RJG-07: A Resolution Addressing the Lack of Installed Pastoral Leadership in People of Color Congregations in the PC(USA)—From the Racial Equity Advocacy Committee (REAC),” and heard from the subcommittee that worked the night before on amending the resolutions Recommendation 2. Bryan praised that subcommittee’s voluntary work to the GA News, saying it “allowed the committee not to get bogged down in its first day of work.”

The subcommittee had brought back alternative language that specified steps to take for providing support to congregations of color installing pastors, in doing so removing wording proposing a year of Jubilee while the issue was studied more. Flora Wilson Bridges from REAC thanked the subcommittee and full committee for its work on Recommendation 2, which “kept the spirit of Jubilee.”

The Rev. Dr. Frank Spencer, president of the Board of Pensions, spoke about support BOP provides to congregations of color, including the “Pathways to Renewal” program, saying that small congregations struggle regardless of their racial ethnic makeup, but that BOP had noticed a significant disparity for middle-sized congregation; majority white churches with between 150 to 300 members can usually call a pastor, which isn’t the case for similarly sized Black congregations. For that reason, BOP had unilaterally expanded Pathways to Renewal to support Black churches with as many as 300 members.

Spencer also pointed to a problem of wording in the amended resolution around “grants,” which BOP cannot administer, unlike the Presbyterian Foundation or Presbyterian Mission Agency (PMA). The committee later accepted language changes fixing that issue.

In the end, the amended Recommendation 2 contained an added pearl directing “the Presbyterian Mission Agency, through the new Center for the Repair of Historic Harms, to establish grants, and in partnership with the Board of Pensions, work to assist congregations of color in calling and installing pastoral leadership by helping with the costs of Board of Pensions (BOP) dues.”

With Recommendation 2 finalized as amended, the committee unanimously approved RGJ-07, including its five recommendations dealt with the day before.

Members clapped — and not just because it was lunch time. The six-part resolution had taken at least four hours across two days, and required hotel-based work by the subcommittee.

After lunch the committee dealt with two resolutions with significant overlap, “RGJ-10: Resolution on Race, Reparative Justice, and the PCUSA—From the Advisory Committee on Social Witness Policy (ACSWP)” and “RGJ-12: Report of the Special Committee on Racism Truth and Reconciliation.” Both mentioned the Presbyterian Historical Society, for example, as a place to work on reparative justice information gathering and resource creation for councils. The persons who had researched both resolutions had delved into many of the same past Assembly reports, including calls for reparation, and drawn many of the same conclusions, even though the specifics of their recommendations were distinct.

The committee heard from both sets of resolution advocates, with Mark Douglas from ACSWP, the resolution sponsor, and Corey Schlosser-Hall of the Presbyterian Mission Agency urging support of RGJ-10 and with Kathryn Jones Calone and Joanna Hipp, members of the Special Committee on Racism Truth and Reconciliation, doing the same for RGJ-12.

Efforts at reparative justice go back to The Black Manifesto and the subsequent creation of the Presbyterian Committee on the Self-Development of People (SDOP) in the early 1970s, Douglas pointed out. 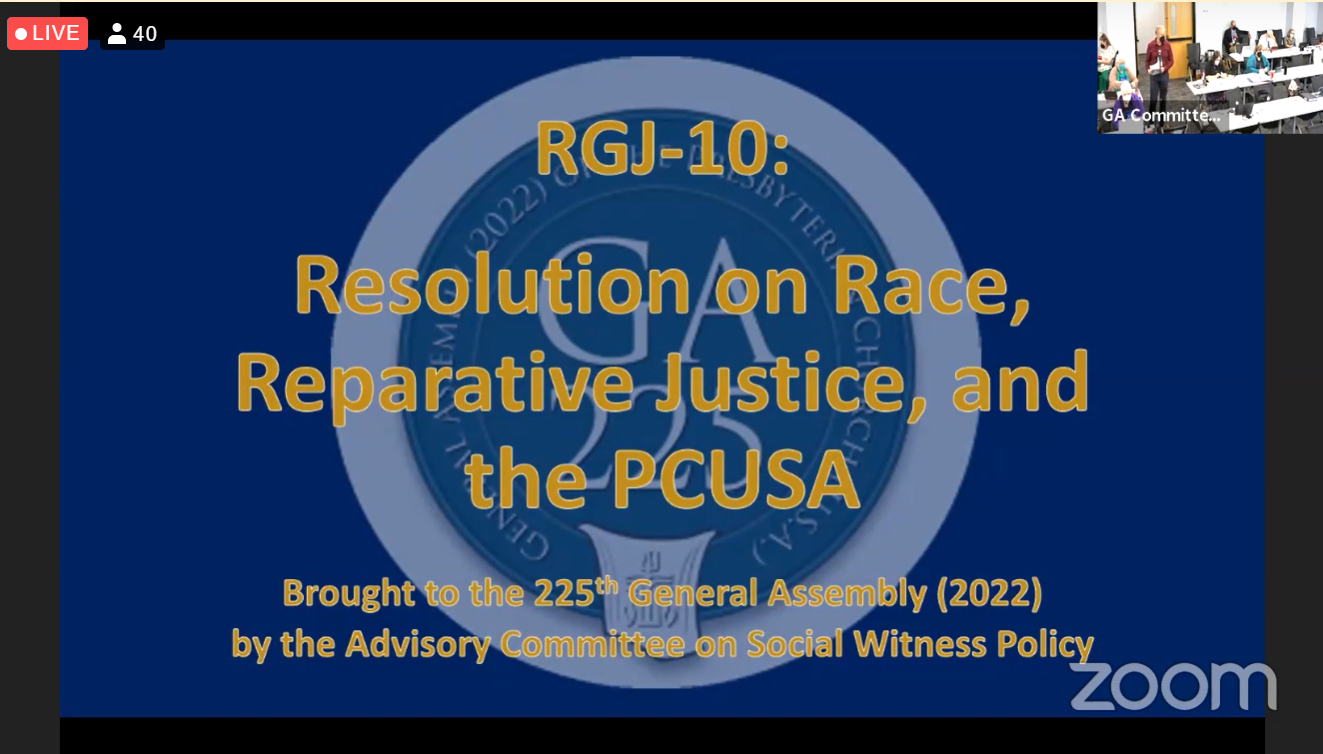 He said, “For Christians, this is especially important work and language” that is embodied in RGJ-10, which calls for, among other things, the Center for Repair to develop proposals for racial reparatory work to be undertaken by the PC(USA) and its constituent bodies, the Committee on Mission Responsibility Through Investment to explore “selective divestment,” and presbyteries to account for histories of race-based injustice when making choices about the disposition of properties. The resolution would cost $12,500.

Douglas mentioned that a recent part of refining the resolution was adding information about the Center for Repair, which Schlosser-Hall described later as “an initiative built into the 2022-2023 [PMA] budget that is being worked on now,” with plans to hire a director shortly after the Assembly.

Calone from the Special Committee on Racism Truth and Reconciliation spoke about the church’s historic pattern of bringing reports on racial injustice before and Assembly that are approved but then given little attention.

In beginning the special committee’s presentation video, she said, “Antiracism work is an act of worship.” Then she and co-presenter Hipp moved through the report and its recommendations in a worshipful mode, referencing the Book of Order, the Bible and the lived experience of individuals on the committee and those with whom committee members spoke with during their years of work.

The resolution’s commendations include appointing “a committee to … explore and expose where white supremacy is embedded institutionally and foundationally in the Presbyterian Church (U.S.A.) and its governing documents and make recommendations,” and identifying recommendations from previous General Assemblies “related to racial equity, dismantling racism, and confronting white supremacy to 1) evaluate continued relevancy, 2) evaluate impacts on members who are Black/Indigenous/People of Color, 3) identify patterns of resistance to implementation, and 4) recommend strategies to overcome resistance/challenges to implementation.” A financial estimate of the entire resolution is $37,000.

The special committee’s work, which culminated with finalizing their report and recommendations in the spring, dates back to GA223, and included listening tours of people impacted by systemic racism.

The “reconciliation paradigm” has not led to reconciliation, Calone and Hipp said. Jennifer Harvey, author of “Dear White Christians: For Those Still Longing for Racial Reconciliation,” added by recording that, “Reparation is the prior work under which reconciliation is possible.” Harvey’s book was recommended to the special committee by staff resource person valerie izumi with the Office of the General Assembly, who later told the committee during the presentation, “The time for striving is past … in this place we are being called to be the repairers of the breach, the restorers of the streets we live in … Our Christian faith demands it.” izumi’s colleague, staff resource advisor the Rev. Denise Anderson with the Presbyterian Mission Agency, told a story of a congregation in Cincinnati that had provided $50,000 of its annual budget to support a nearby Black congregation. The work of repair is possible at every level of the church where there is willingness to do it.

Calone spoke about the seeming irony of two white people leading a presentation looking at white supremacy, adding that white people have a special obligation to lead on this work in such an overwhelmingly white church, and a debt of obligation given the pain and loss of opportunity white privilege has cost and continues to cost people of color.

The presentation ended with a return to Scripture, and its instruction to all Christians to do the work of “repairing the breach,” which the Rev. Paul T. Roberts of Johnson C. Smith Theological Seminary spoke about on screen. “Friends, this is the work of the Lord. Thanks be to God.” 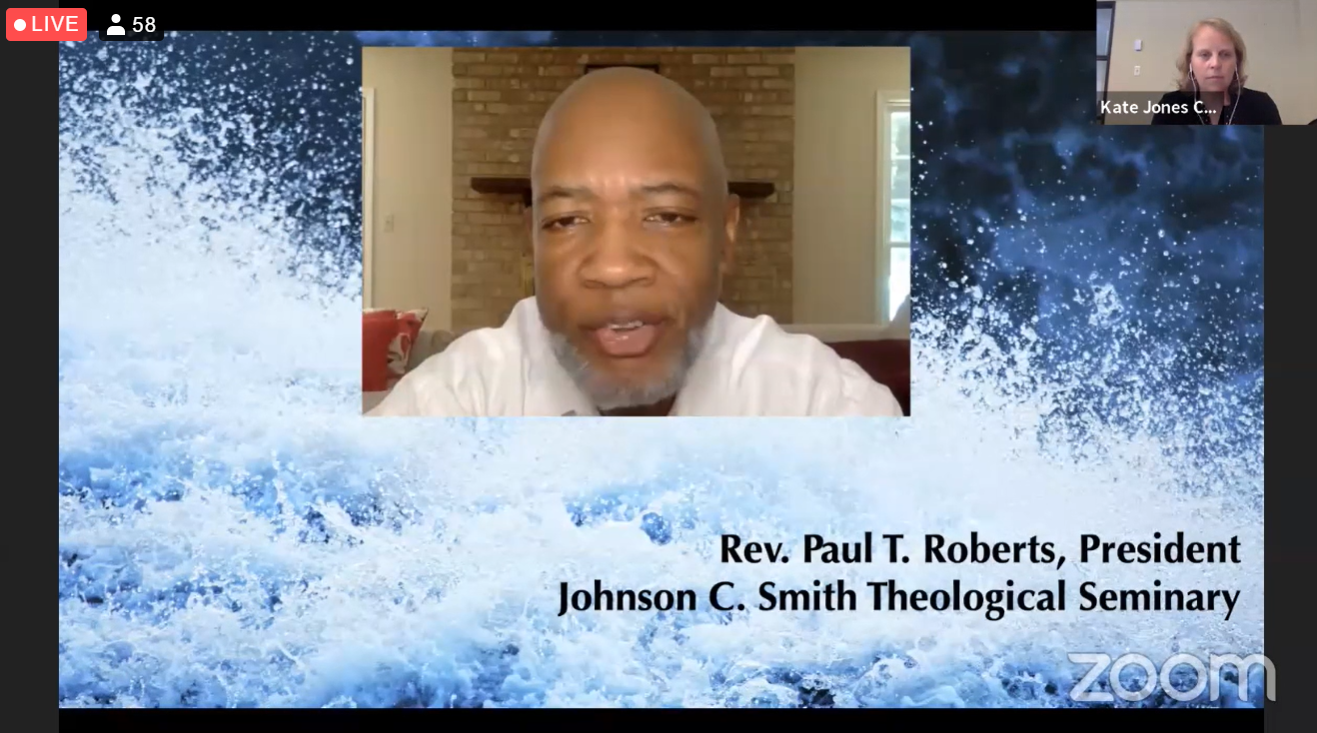 The presentations completed, the committee decided to keep the two resolutions largely intact and to consider each individually, letting overlapping actions be worked out by persons and groups doing the work in the future.

The amendment process brought changes to RGJ-10 and RGJ-12, but not many. RGJ-10 received added language aligning the recommendations to legislation before the U.S. Congress. Another amendment required congregations to respond to a survey from Research Service directly to the Center for Repair in time for the center’s interim report.

Nothing else was changed before a final vote on RGJ-10, which saw it carry unanimously with 30 yes votes.

After a short break the committee turned to RGJ-12. Approved amendments from commissioners and advisory delegates called for an additional pearl about support to HBCUs (Historically Black Colleges and Universities). After General Counsel Mike Kirk of the Administrative Services Group advised replacing “bylaw” with “manual of administrative operations,” the committee did so, leaving only one last amendment: replacing “collaborate and gather” with “identify and collaborate with” (leaders of color to discern…). The final amended RGJ-12 passed on a vote of 31 yes, 1 no.

After a quick mention of the big national news of the day, the overturning of Roe v. Wade, the committee leadership took time to have committee members check in with each other and assess how they were feeling.

“There is a lot of tension around race,” Moderator Bryan said, before talking about her experiences and perspectives as an African American. Numerous commissioners talked about their feelings when first learning they had been placed on the Race and Gender Committee, which ranged from glad to incredulous. By the end of this day, all who had spoken were gratified by the committee’s work.

Parliamentarian the Rev. Brian Ellison pointed out something for the committee to think about going into its last day: the few dissenting votes and voices that had been heard during the committee’s discussion and discernment. He wondered if people who are struggling with accepting the substance of some RGJ motions were feeling free to express themselves in this space.

On Saturday, the committee’s schedule includes items of business on the Disparities Experienced by Black Women and Girls Task Force, Race as a Public Health Crisis, and Violence and Hate Against Asian Americans and Pacific Islanders.