At GA225, technology is taking a backseat to discernment

Behind the scenes at GA225, the big news is that technology is starting to not be news anymore.

Halfway through the four waves of committees doing their work in the new convention center at the Presbyterian Center, Julia Henderson, the Office of the General Assembly’s leader for GA Planning and Business Management, and Vicente Guna, associate director of OGA Technologies, were asked to assess how things stand from their vantage points in the conference center production studio. They responded with a joint email.

If the technology put in place to make a hybrid assembly work well isn’t the newsmaker it once was, “it is enabling the real important side of GA: the discernment process of the business before the committees,” the two said.

That said, the two were happy to evaluate just how well the infrastructure is holding up to the many expectations organizers expressed going into the PC(USA)’s first-ever hybrid assembly, which began June 18 and closes on July 9. 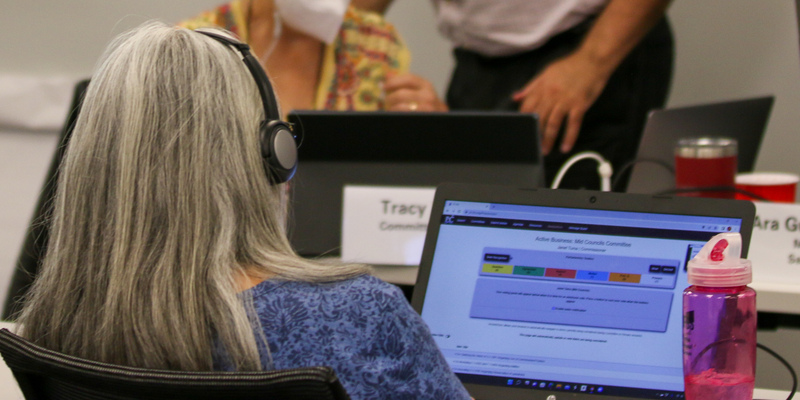 Commissioners review item of business presented to the Mid Councils Committee during committee session held on June 20, 2022 for the 225th General Assembly in Louisville, Kentucky. (Photo by Randy Hobson)

“The building infrastructure is responding as intended,” they said. “The WiFi network is enabling GA participants to access the internet without problems, which was one of the major concerns.” The two thanked Administrative Services Group for its work planning and shepherding construction of that infrastructure.

Henderson and Guna deemed the performance of PC-Biz “great. It is allowing [commissioners] to vote and submit amendments.” The system for displaying GA business to commissioners and to the world is also “helping moderators lead committee work” and “enabling recorders, trackers and business managers to record all recommendations to the General Assembly.”

The two thanked Nathan Young, General Assembly producer, and Angie Stevens, a communications specialist in the OGA, for producing and giving airtime to events that have occasionally occurred back-to-back and even all at once: the initial plenaries, opening worship, the Juneteenth celebration and the livestream of four committees meeting simultaneously.

Asked to name a challenge that’s been accepted and met, Guna and Henderson turned to SessionSync, a function of PC-Biz that automatically directs users to the business item at hand, whether it’s during plenary or one of the four committee sessions. That latter challenge, “together with Covid restrictions around the presence of people in the room has made it more challenging for people following the livestream to access the amendments in committee,” they said. “We overcame this challenge by changing the plan on the fly and sharing in the livestream the SessionSync view of the moderator.” That way, “everybody out there can follow the exact information that commissioners have in front of them.”

While “it should not surprise us anymore,” the two said they’re always amazed “that people volunteering for so many jobs around GA get so involved.” Those volunteers “are really at the core of making technology, systems and processes work.” 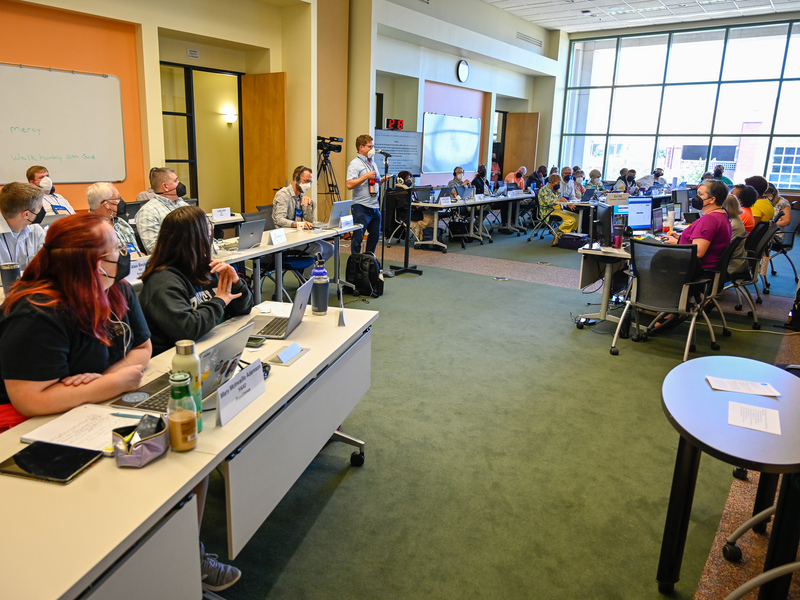 “It is always great to see new and not-so-new PC(USA) people joining us to make GA happen,” they said.

One example is Mathew Eardley, a ruling elder from the Presbytery of Boise.

“He returns to GA225 as script docket manager for plenaries but has also been a significant contributor to tech support in the [Presbyterian] Center,” the two said. “He will be working every day of the General Assembly, serving in a volunteer capacity out of his love for the denomination.”

Kerry Rice, Deputy Stated Clerk in the OGA, noted that committees have worked hard, “like they do at every assembly.”

“The process allowing for resource persons to participate in person or remotely seemed to be effective,” Rice said. “The progress we have made with the help of Global Language Resources for broader language accessibility in committees is an important step in our work toward greater equity.”

“And once again,” Rice said, “I’m filled with gratitude for the commitment of these commissioners and advisory delegates, and all who supported them!”